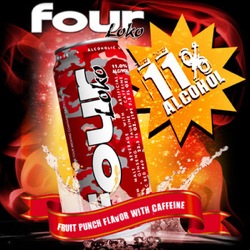 ...they'd just been drinking Four Loko, the alcoholic energy drink known as "blackout in a can." From KING-5:

High-alcohol caffeinated drink, not drugs, sickened Central Washington students at party. CWU officials, along with state Attorney General Rob McKenna, this morning announced the results of an investigation into the Oct. 8 party in Roslyn. They reported that the students were drinking a caffeinated malt beverage called "Four Loko," which is 12 percent alcohol. One equals four to five beers and several shots of espresso.

Many of the young people that attended the party were students at Central Washington University. Nine CWU students were sent to the hospital for treatment. One student almost died. CWU President James L. Gaudino said the blood alcohol levels of hospitalized students ranged from .123 to .35. A blood alcohol concentration of .3 is considered lethal. Each student had consumed “Four Loko” and some had used it with other alcohol.

Comments 34
Tags: News Blogs Drunk
The Stranger depends on your continuing support to provide articles like this one. In return, we pledge our ongoing commitment to truthful, progressive journalism and serving our community. So if you’re able, please consider a small recurring contribution. Thank you—you are appreciated!
CONTRIBUTE NOW