Tunnel-Digging Machine Isn't Digging Any More Tunnel Until Summer at Least: Bertha's broken and she might need a "front-end mission" to "excavate the shaft," Seattle Times reports. In other words, they'd make a big hole in front of her head and then push her 360-ton head out through it. It'd be "lifted using a crane, supported by wide footings as if on duck feet, so it wouldn’t sink into the soft waterfront soils." Or, they "might be able to deliver parts from the rear." Either way, this "will take months." You may be wondering: What else could possibly go wrong? Here's an article helpfully titled "What Could Possibly Go Wrong?" by Stranger psychic Dominic Holden, published in 2010. 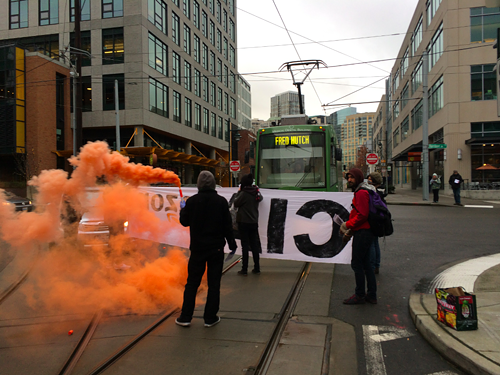 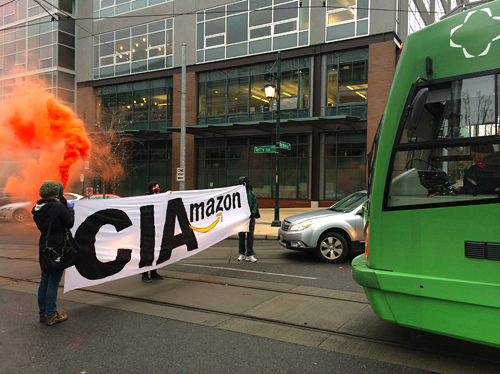 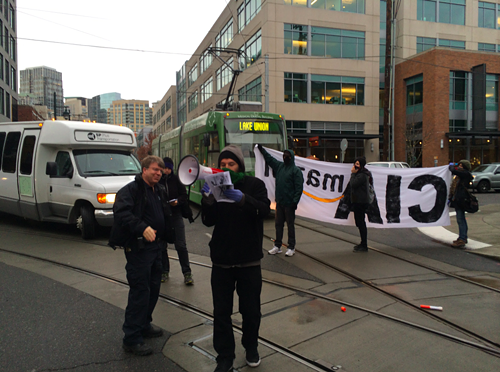 Masked Activists Blocked the South Lake Union Trolley This Morning: They distributed literature saying, "Amazon, the leviathan that calls Seattle home, is currently building a private data cloud for the CIA. With this cloud, the CIA will be better able to incinerate entire Yemeni families with Predator drones, stalk domestic and foreign dissidents, and keep track of its operatives across the planet." Read the entire letter about Amazon from protesters here.

Brendan Kiley Watched the Demonstration Unfold: Acting on a tip, Brendan was there for the CIAmazon protest. Here's what he saw.

Speaking of Drones, Obama Is Considering Another Drone Strike on an American: As Eli points out, this would be the fifth American Obama's killed by remote control.

Oh, and Speaking of Traffic, More People Were Subpoenaed Last Night Over Chris Christie's Bridge Scandal: Including people who would know whether or not the governor's helicopter flew over the traffic-snarled bridge—the traffic snarl he says he knew nothing about at the time. "Colin Reed, a spokesman for Christie's office, confirmed today that the Republican governor did fly in a helicopter from New York City to Trenton on Sept. 11 of last year — the third day of the closures. But asked whether the aircraft passed over the bridge, Reed declined comment," reports The Star-Ledger.

The Day We Fight Back Against Mass Surveillance: That day is today, according to this website, which has some facts about the NSA and some information on pending legislation in Congress.

Plane Crashes in Remote Algeria: On board were 99 members of the military and their families. Everyone was killed.

Sylvia Plath Committed Suicide 51 Years Ago Today: On a super cold morning in England, before sunrise, she made some cookies for her children, sealed the cracks under the doors of the kitchen with wet cloths, put her head in the oven, and turned on the gas. It's nearly impossible to see a black bird in rainy weather and not think of this masterpiece of a poem. (If you want to follow along as the poet herself reads it, here's a sound file.) In happier times, she would describe things like why she would rather hang out with "people who know all about boats" than poets: