Is There a Connection Between the Mudslide and Our State's Historical Mishmash of Logging Regulations? 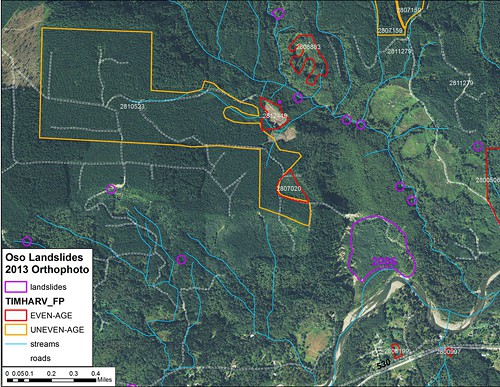 While rescue workers scramble to find people trapped in the mudslide along the Stillaguamish River, experts are scrambling to find what might have triggered the catastrophe. Washington State's logging practices in the area, overseen by the Department of Natural Resources (DNR), are coming under special scrutiny.

"Your ordinary citizens would be shocked if they really knew how this worked," said Peter Goldman of the Washington Forest Law Center. Goldman was cautious about pointing to any one cause for the slide. He, like many other experts, thinks there was a kaleidoscope of contributing factors, including unusual rainfall and the silt and clay composition of the slope, but he also says that the way the DNR manages logging in the area is not as rigorous as it should be.

A watershed analysis report about that slope from the mid-1990s, for example, ranks its hazard rating as "high" and warns that further logging could exacerbate the problem. Logging in the area continued anyway.

"I'm not against logging," Goldman said. "I think it has an essential role in some areas. But what we have here is a situation that goes way beyond reason. A system that's very stacked against doing things right on the ground."

The DNR, headed by elected commissioner Peter Goldmark, is a state agency that manages 3 million acres of public land and auctions off the logging rights to private companies. Most of that money goes to fund public education in Washington State. The DNR's timber sales are a source of non-tax education income that, in fiscal year 2013, provided $50 million of revenue to primary education (much of that bound for school construction) and millions of additional dollars to public universities, prisons, and other state costs. A study by the Lincoln Institute, based on DNR data from 2006, showed that 1.8 million acres of state land—78.4 percent of the DNR's holdings—helped fund K-12 education.

But anyone who wants to harvest timber in Washington State must apply to the DNR. If the DNR wants to log its own land, it must make an application to itself. The upshot is that the DNR is ultimately responsible for making sure that all logging in Washington, whether on its own land or on private land, complies with the rules—a patchwork of regulations that, Goldman said, have only come into effect since 1975 (before that there was very little regulation), and have been shifting ever since.

Which means that figuring out how much the forests around the Hazel slide have been logged, and whether that logging was consistent with whatever rules were in place at the time, is enormously complicated.

"That whole area has been logged for 100 years at different times in different shapes under different regulatory systems," Goldman said.

In the past few days, WFLC has launched an investigation to cobble together that timeline. (All the logging applications since 2002 are online. "The other stuff," Goldman said, "literally has to be found in boxes in basements at the DNR." The WFLC filed a public-disclosure request for those yesterday.)

Here's what we do know: DNR owns a little bit of land in the slide area but most is owned by a small, low-profile company called Grandy Lake (Goldman hadn't heard of them until this week, even though Goldman been a forestry watchdog for 17 years). Grandy Lake has not responded to a request for comment. But according to Goldman's research, Grandy Lake, just like the DNR, has a history of subcontracting its logging. There has been clear-cutting and selective cutting (a very loose term) above the Hazel slope since 2002, including DNR-approved logging that ended in 2005. In 2006, there was a large landslide on the slope—you can see the scars in the satellite photo above.

Geologist Dan McShane confirmed that logging could exacerbate the inherent instability of a slope like that. And this is a slope that's been logged for 100 years. What regulations that do exist have only been around since 1975. (And whether those regulations were adequate, or adequately enforced, is a whole other question.) McShane said by email: "This slide is located in an area where increased groundwater recharge has the potential to increase deep-seated landsliding."

McShane forwarded me a watershed analysis for the Hazel area. It's a highly technical document, but it talks about the various possibilities for the slope's "failure"—from groundwater recharge to silt on the slope to erosion by the Stillaguamish. It also discusses logging: "... ground water supply to a particular landslide can be increased in the short term by clear cutting or wildfire within its recharge area. Alternatively, recharge in the longer term can be reduced by reforestation."

During the early 2000s, Goldman says, watershed analyses were used as a separate—and often less rigorous—set of rules to govern logging. Between 1997 and 2011, he said, timber companies leveraged watershed analyses as a "get-out-of-jail-free card."

"I suspect that a lot of the logging proposed under watershed analyses did not receive the same kind of scrutiny that logging would under the other rules," he said. "The watershed analysis is very deferential—the review can be a little more superficial than if they [timber interests] are just applying the standard forest-practice rules."

McShane, the geologist, said: “After the terrible slides in southwest Washington in 2007, a lot of people, including me, wondered ‘Why the heck were they allowed to clear-cut that area?’ We since learned they were using a bad watershed analysis and not the other, more rigorous rules.”

That's just one variation in the crazy-quilt of different rules that were applied in different times in different places. To see what role logging might have played in the Hazel slide, people like Goldman have to figure out (a) where logging happened, (b) what rules were in place at the time, and (c) whether DNR and the logging companies followed those rules.

Compounding the problem, Goldman believes the DNR has had a tendency to play fast and loose with the rules. "It's one thing to have a rule or a watershed analysis in a book," he said. "It's another thing for folks to go out on the ground and point to the line where you can do X or not do X. A lot of times, the DNR goes out there with the landowner and starts negotiating and horse-trading. It's an old-boy's network in many ways—I'll give you this if you give me that—and it can become a 'let's make a deal' process on the ground."

DNR, he said, is also hobbled by its own budgetary and employee constraints. It only costs $150 to apply to log somewhere—"you could log $5 million worth of wood with a $150 permit," he said—and DNR gets about 12,000 such permits a year. "That just doesn't pay for enough people out in the field enforcing the law," he said.

Add that to the fact that any logging application not acted on in 30 days is automatically approved, plus pressure from both the timber industry and the state (which needs the money for education), and you have a lot of logging going in a very chaotic legal environment.

Just a few days before the Hazel slide, for example, the DNR approved a logging project just a couple of miles to the west on a much steeper slope—so steep it will have to be logged by helicopter. 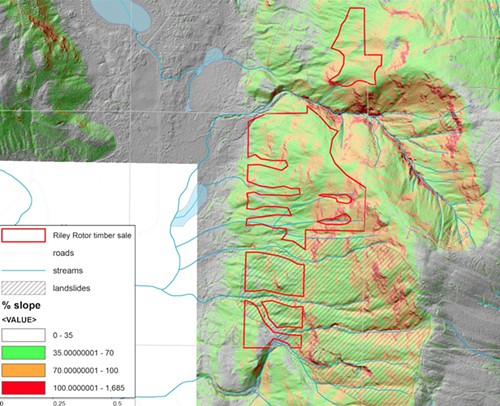 "That's the Riley Rotor area," Goldman said. "It's at a 65 percent grade—black diamond skiing runs are barely 50 percent, just to give you an idea... they decided to helicopter-log the whole thing." The WFLC, on behalf of some residents who live below the Riley Rotor area, opposed the logging during a public-comment period. As a result, Goldman said, the DNR took 6 acres of the 200-acre timber sale off the table. The residents down below wanted WFLC to appeal further, but it didn't have the resources. "I felt like I'd read in the newspaper someday about the whole thing sliding," Goldman said. "It's sad, but these are very difficult and expensive cases to bring to court."

Most logging in the state, Goldman said, has "pushed the limits pretty hard and didn't leave any tree behind if they didn't have to. The law allows a lot of bad stuff to happen—the law has not caught up with the environment or with public safety."

A DNR spokesperson has not yet responded to a request for comment.

From the mid-1990s watershed analysis McShane forwarded me about the Hazel/Oso slide area: 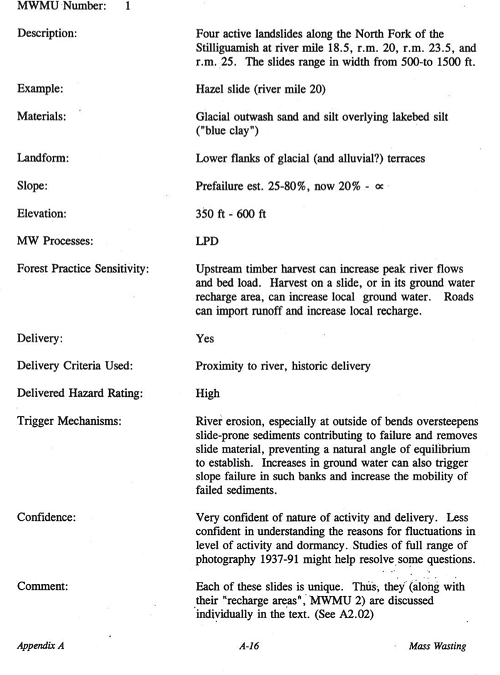 A breakdown of how revenues from DNR—the vast majority of which come from logging—are distributed: 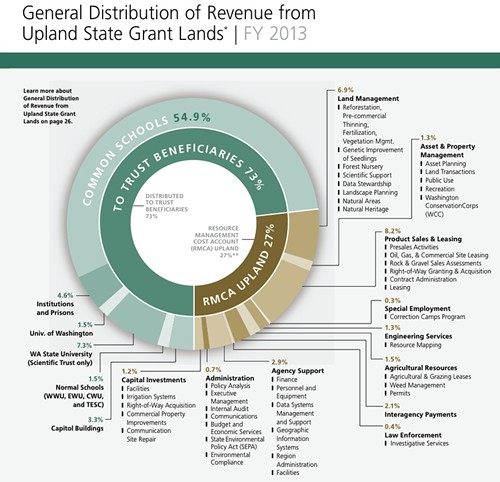 Comments 44
Tags: News Blogs
The Stranger depends on your continuing support to provide articles like this one. In return, we pledge our ongoing commitment to truthful, progressive journalism and serving our community. So if you’re able, please consider a small recurring contribution. Thank you—you are appreciated!
CONTRIBUTE NOW