Kshama Sawant on a $15 Minimum Wage: "Ultimately, the Decision Will Be Made By the City Council" 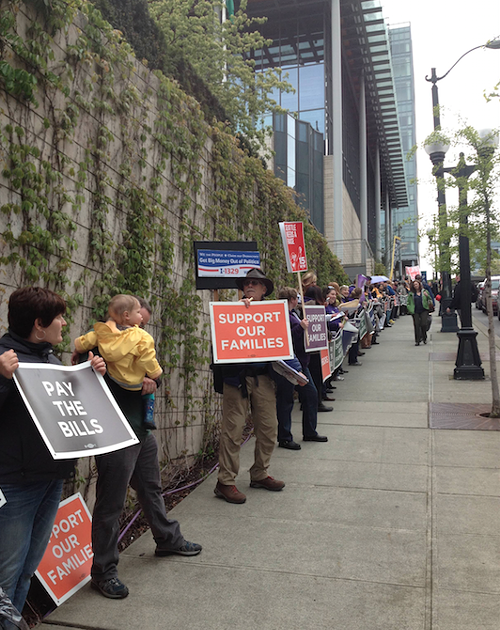 City council member Kshama Sawant says she's "not surprised" that the mayor's minimum-wage committee wasn't able to reach a deal today. "I think it's important for people to realize that it's not an earth-shattering surprise," she says, describing the goals of the group's labor-side and business-side members are fundamentally "divergent."

But the end of this committee's meetings isn't the end of the process. "It's the start of the real process," Sawant says, "which is going to be in city council chambers."

That's fine with her.

"Let's move our attention away from the appointed committee and to the elected members of city council," Sawant tells me by phone from City Hall. "Ultimately, the decision will be made by the city council, and they are accountable to the people of the city of Seattle."

What were the roadblocks in the committee? What proposals were considered, what compromises were too far or not enough?

She still won't say specifically. Mayor Ed Murray has called a press conference for tomorrow afternoon, and says he still hopes committee members might come to some agreement before then. Sawant seems less optimistic. "If such a compromise were reachable, then why wasn't it reached in all these months?" She does hint at some of the issues on the table, such as what counts as a small business versus a big business, and the idea of adjusting the wage for inflation while it's being phased in.

On that point, she's firm. "We want $15, in today's dollars, at some point," Sawant says. "We've already made it clear we're open to a phase-in, but what does that mean? Every year going forward, workers have to get a cost of living adjustment. If we don't get to $15 until 2018, we're willing to accept that. [But] that has to have a cost of living raise. If you don't, then when you get to $15, it's not the same thing."

Her goal, she says, is larger than an advisory committee. "The goal is not to reach a consensus on the committee. The goal is to uphold the interests of the workers."

But wouldn't a deal at least achieve something for workers? Isn't something better than nothing? "The goal is absolutely to get something," says Sawant, "but we have to be careful. We want something that will improve the standards of living of workers in this city." And for that, she turns to the council—and to the people of Seattle.

"We have to get out of this mindset that these people from on high are going to do this," Sawant says. It was a grassroots campaign that brought the issue of a $15 minimum wage to the table in the first place, she reminds. And the activism is ongoing: Down at City Hall right now, activists are circling the entire building in a human chain, calling for a minimum wage proposal that serves working people. A few more photos of that action are after the jump.

Comments 13
Tags: News Blogs City
The Stranger depends on your continuing support to provide articles like this one. In return, we pledge our ongoing commitment to truthful, progressive journalism and serving our community. So if you’re able, please consider a small recurring contribution. Thank you—you are appreciated!
CONTRIBUTE NOW