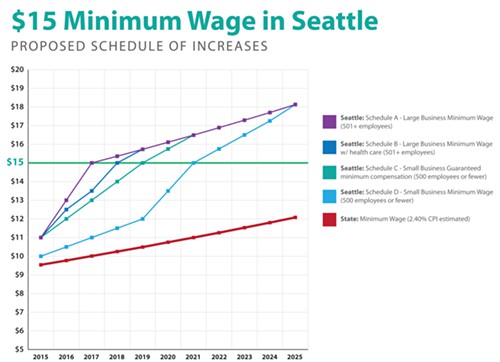 So the mayor announced a $15 minimum wage proposal that most of his advisory committee agrees on, and it's got a pretty complicated, multi-tiered wage schedule. Some people are up in arms. Some people are resigned. Some people are exhilarated. (And everyone is exhausted.) The complications, the 500-employee cutoff for "small businesses," and the long timeline make it seem like this is a big compromise from workers without as much sacrifice from business owners. A giveaway, if you will.

So why is the labor side the one offering full-throated approval of the plan while the business side dithers? (As I reported earlier, a coalition of progressive organizations is already rallying around this plan, while the head of Seattle's chamber of commerce is one of the people who couldn't even manage to vote "yes" in committee.) How did this become the labor proposal?

I asked Sage Wilson, who has been working on this issue for more than a year, organizing striking fast food workers for labor-backed group Working Washington. Why is this "$15 by 2021" phase-in a great plan? He says he sees it as "McDonald's in 2017, Starbucks in 2018," since that's when those employers would phase in to paying $15 here in Seattle. (Big business employees who get paid health care, like many Starbucks employees, would hit $15 in 2018. If they don't receive health care, they'll make it to $15 on the earlier schedule, by 2017.) Fast food workers started walking off the job and marching in the streets almost exactly a year ago, Wilson says, and he thinks their core demands are being met by this proposal.

Wait, what? Yes, he's serious. He even calls this "unambiguously a victory for workers." So he's crazy, right? Or a sellout? Or he's been ground down by big business? But he says it's all about scale and about including basic principles. "Hawaii is getting to a $10.10 minimum wage—in 2018," he says, mentioning yesterday's headlines. "And that's considered a big deal. The scale of this [Seattle plan] is actually really enormous. We are talking about low-wage workers' pay close to doubling in 10 years."

But you can't say that this graph is the plan workers have been organizing around. No one's ever seen that graph on a T-shirt. Sure, admits Wilson. "A fast food worker is not going to go on strike and demand a four-tiered wage schedule, right?" However, he reminds, "This is not a strike demand... A demand is not, and should not be, complicated. But an ordinance?" That's different. "The implementation of any law is complicated. But this represents everything we've been saying all along: Every single person gets a substantial raise every single year. Everyone gets to $15. And everyone gets to a real minimum wage with no deductions for tips or benefits. Those are fairly straightforward principles that are reflected in this."

So while the phase-in period is complicated—complicated enough to make enforcement really tricky, Wilson concedes—the movement is in the right direction, and this agreement has buy in from a wide-reaching coalition. Is it fast enough? Maybe not for everybody. But "this is fast," he says. "This is thousands of dollars a year for a low-wage worker." For a movement that was just pounding the pavement a year ago, trying to get reporters to show up outside Subways and Taco Bells and listen to striking workers, this probably feels like hyperspeed.

Comments 51
Tags: News Blogs
The Stranger depends on your continuing support to provide articles like this one. In return, we pledge our ongoing commitment to truthful, progressive journalism and serving our community. So if you’re able, please consider a small recurring contribution. Thank you—you are appreciated!
CONTRIBUTE NOW