Another summer, another round of allegations from a South Seattle homeowner that a big bank deceived and entrapped her into foreclosure. This time it's Dana Ventura, a 51-year-old clerk at the Safeway on Rainier Ave., who has lived in a cream-colored one story house around the corner since the 1990s.

Here she is, minutes before being arrested by Seattle police this morning:

"Chase Bank told me they couldn't help me with a loan modification until I missed three payments," she said, describing how she lost a previous job due to health problems and fell behind on her mortgage. She said she followed the bank's instructions, but instead, Chase refused to negotiate the modification and ruthlessly pursued a foreclosure—after it bought the mortgage from now-defunct Washington Mutual, which bought it from US Bank. A spokeswoman for Chase Bank tells me she's looking into the allegations.

Banks tell homeowners to miss their payments—then foreclose on them—all the time. One tiny cause for optimism emerged back in February, when a Snohomish County judge, "troubled" by the bank's practices, overturned a Bank of America foreclosure. The bank had told the homeowner Jacob Bradburn to skip mortgage payments in order to qualify for refinancing and foreclosed on him anyway.

But that's the exception to the rule.

And here's Ventura being arrested by Seattle police: 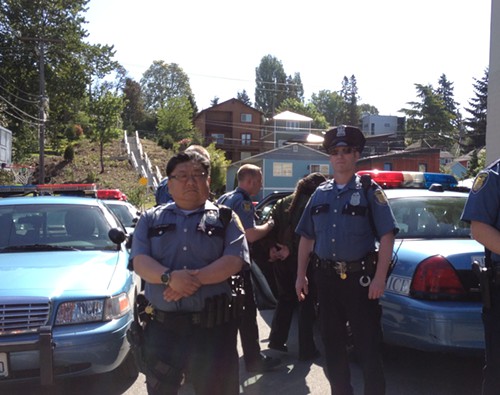 Chase Bank sold the home to a condo developer, according to activists from Standing Against Foreclosure and Eviction (SAFE), who organized a last-minute protest of the home's demolition after they saw "no parking" signs on the sidewalk two days ago. "Banks got bailed out, we got sold out!" they chanted.

"I have to make a stand because this isn't just happening to me," Ventura said. "This is basically criminal. More people need to stand up and be counted and say, this shouldn't be happening."

Crucially, Ventura told me before her arrest that her home "was never underwater"—meaning she didn't owe more on the home than it was worth. In a report to the Seattle City Council in March, a task force used declining rates of underwater mortgages to downplay the problem of illegal and unethical foreclosures. But rates of foreclosure are still higher than they were before the recession, and housing attorney Lila Sotelo reminded the council that hand-picked "numbers don't tell the full story."

Tommy Anderson, an elderly neighbor with a cane, walked over to watch the protest this morning. He said he's sad to see his neighbor go and that he's had his own troubles with banks selling his mortgage around, trying to run him out of his home. "This is the history of the rich taking from the poor," he told me.

Comments 20
Tags: News Blogs
The Stranger depends on your continuing support to provide articles like this one. In return, we pledge our ongoing commitment to truthful, progressive journalism and serving our community. So if you’re able, please consider a small recurring contribution. Thank you—you are appreciated!
CONTRIBUTE NOW