It's official, folks: recreational pot is legal in Washington and the stuff is flying off the shelves at Top Shelf Cannabis in Bellingham. The line of customers is not letting up.

Cale Holdsworth, 24, was the man to make history with the first purchase: two grams of OG Pearl Kush, from a Bremerton grower, for the special sale price of $26.50 ($6.68 in tax). He's in town from Abilene, Kansas visiting family and affably did one interview after another with the dozens of reporters on the scene.

"What better way to participate and support the cause than coming down and being here for this," he told me. "This is mainstream, and now it's finally legal and we can enjoy it! This is another step in nationwide legalization, which I think we should strive for." He says he's eagerly awaiting the day when Kansas comes around.

Plenty of Canadian journalists are here, asking questions about what this means for their pathway to marijuana legalization. Activists are posing for the cameras with "Drug War Ends Here" and "No One Deserves to Go to Prison For A Plant" signs. There's even a dude wearing bright green Washington state flag as a cape.

Meanwhile, buyers file out beaming and holding up their little brown bags.

And across the freeway? 2020 Solutions, which planned to open but hit a late night snag with their quarantined supply. Manager Aaron Nelson said trying to be ready today was like riding a rollercoaster which suddenly disappeared. "There's no words" to describe the disappointment, he said, but they'll try to open by Thursday. In lieu of weed, 2020 is offering donuts and coffee this morning. 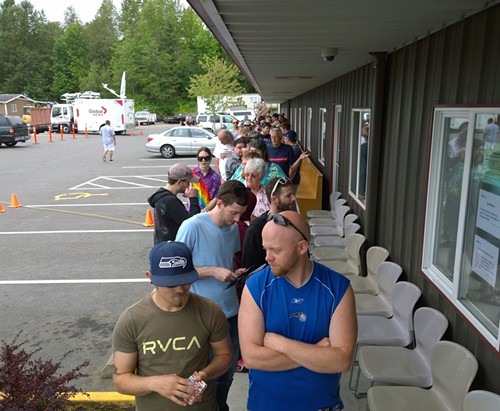 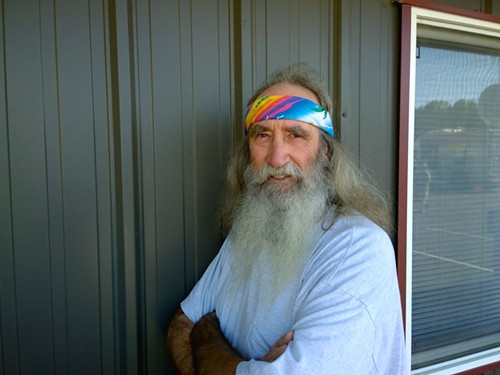 Comments 27
Tags: News Blogs Weed
The Stranger depends on your continuing support to provide articles like this one. In return, we pledge our ongoing commitment to truthful, progressive journalism and serving our community. So if you’re able, please consider a small recurring contribution. Thank you—you are appreciated!
CONTRIBUTE NOW