On July 2, Mayor Ed Murray nominated Scott Kubly to be the new director of the Seattle Department of Transportation, replacing Peter Hahn, who resigned last year after Murray's election. Murray calls Kubly a "transportation renaissance man who’s virtually done it all." He previously worked at transportation departments in Chicago and Washington, DC, and was acting president of Alta Bike Share. The city council will discuss his confirmation next month. I sat down with Kubly on Friday to talk about his experience and his goals for Seattle.

What are the biggest transportation challenges right now in Seattle?

The biggest challenges I've observed, in the past four weeks I've been here, have been around grappling with growth. You've got a city that's growing tremendously fast. You see it in all parts of the city. That's a really good thing, but what it does is it puts stress on the transportation system. And this transportation system is pretty fragile. You can have one incident that sends the entire system into gridlock if it's in the wrong place in the network.

The other thing I've noticed is that there's this profusion of modes. It's a very transit-rich environment, but there's a lot of different options. So we have four different trains—the commuter rail, the light rail, the streetcar, and the monorail. And then you have two different ferries: Washington State Ferries and the King County water taxi. You have King County Metro and Sound Transit buses, and Community Transit. And then Microsoft and Amazon have their shuttle systems. And then you have Uber and Lyft and taxis and Car2Go and Zipcar, and soon to be Pronto bike share.

You have this rich ecosystem with lots of different options. But there's a perception, and to a degree a reality, that they're not all integrated as tightly as they could be. And as a newcomer, that definitely is something that's hard to wrap your head around.

As the city's growing, we've got long-range plans for high-capacity transit hitting these high-growth neighborhoods. But in the interim... my priorities are really trying to figure out what's the right transportation solution for a particular context, recognizing that it's not always a one-size-fits-all solution. 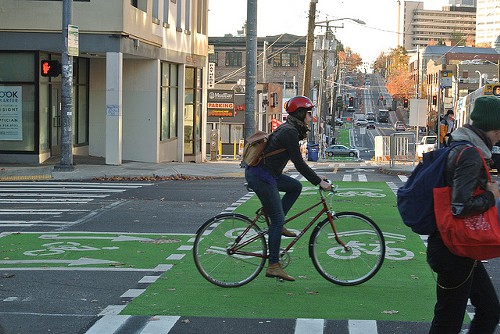 How does it compare to Chicago?

In Chicago, you had a city that had different kinds of challenges. On the north side, it was the booming Seattle-type environment. But then if you go on the south side, it's still dealing with deindustrialization and depopulating, to a degree. The infrastructure in Chicago is quite a bit older, so you had bridges that were built one hundred years ago and were too low for trucks to get under. A lot more speeding and a lot more aggressive driving. One of the guys with the Active Transportation Alliance used to say, "Chicagoans move aggressively, regardless of mode."

We always ask this: What are you going to do on light rail? It's been talked about for decades and decades and kept getting pushed off into the future. People got behind the tunnel, and meanwhile, we still don't have robust light rail in this city.

The good thing, though, is it's coming. There's the expansion to the north with University Link... and then there's another extension planned... in the pipeline, ready to go. The East Link is moving forward. We've got an extension to the south. And Sound Transit is working on a long-range system plan that's the next tranche of investments. So from that perspective, it's a really great time to be here. Because you could rightfully say maybe 10 or 15 years ago, "Yeah we've been talking about it for a while." But I think now, you look at Sound Transit and they're in the doing mode.

What are your thoughts on our tunnel fiasco? We've got a giant machine stuck underground. What do you make of state lawmakers' prioritization of that project and their insistence that it would work? My colleague Dominic Holden was writing way back when this was proposed that it wasn't going to work and wasn't even worth it because we need to move to mass transit.

My perspective on the tunnel is [that] my role is to help the state successfully pull off that project. So whatever we can do to help them be successful is what we need to do.

You got some props from Seattle Bike Blog the other day due to the fact that on Second Avenue, which has been seen as a death trap for bikes, you've already got protected bike lanes almost up and running. Is that something that you want to continue to try to do, to push these things out fairly quickly? And what is the significance of that, for you?

If you look at something like that Second Avenue protected bike lane, that's a dangerous corridor for cycling or pedestrians. So putting in a protected facility is actually going to make it safer for all users—safer for pedestrians, cyclists, and for people in automobiles. And that's been documented in city after city after city. You go to New York, Vancouver, DC—cities all over that put in these facilities become safer.

What you find is that, when we put those in on Dearborn—

I bike down Dearborn all the time.

No, no, in Chicago, there's a Dearborn. So we put in a protected two-bike lane down Dearborn, roughly the same length, right through the heart of the loop, right through downtown Chicago. We saw adherence with the traffic signals go from something like 20 percent to 80-something percent for people riding bikes. And I think it's really important that that message gets out to people on bikes as well, which is: If we want safe facilities, and if we want high-quality facilities, that means if you're riding a bike, you also have to follow traffic laws the same way we would expect somebody in a car to follow traffic laws.

What you make of Jason Rantz on KIRO Radio giving you a lot of grief about SDOT's decision to ban right-hand turns from southbound Dexter onto Mercer during construction in the area? How do you deal with intransigent critics who perpetuate this "War on Cars" narrative, and think that bicycle infrastructure should never come at the expense of convenience for drivers?

So, I think the War on Cars narrative is not unique to Seattle. You see it in a lot of different cities, that kind of rhetoric. I think it may have been coined by Rob Ford. And I'm being serious, I think it was coined by Rob Ford [laughs]. But I don't think it reflects the reality of what it takes to have a transportation system.

The other thing I would say on this right-hand turn issue: I have a different job than he does. In my first two weeks on the job, I looked out of my office and there was a fatal crash where a pedestrian was run over by a truck turning right. And there was a near-fatal crash where a bicyclist was run over on Spokane—another truck turning right. And the person was trapped under the vehicle and they had to jack up the vehicle to get the person out from under it. And I also had a staff person sent to the ICU, crossing the street as a pedestrian, hit by a truck turning right. Okay?

These were three separate incidents, not even related to Dexter. One was right here at Ninth and James, so you can see that right there. That's my walk to work. Then you could look down at Fourth and Spokane and see it right over there.

Safety, for every department of transportation, is going to be the number-one priority. And we should not accept a fatality as a byproduct of our commute.

[SDOT spokesman Rick Sheridan interjects:] They'd seen a number of near misses [at Dexter]. And then when two collisions occurred in the same day, they recognized that they needed to make changes for the sake of safety.

Do you have any target numbers you want to hit in terms of bike or pedestrian usage that you'd like to get to in this city, in terms of moving away from cars?

I would say that just to maintain the status quo, we need to go from two thirds of people commuting via transit (walking, biking, carpooling, [buses])—we need to take that from about 66 percent to 70 percent. Just to maintain where we're at over the next 20 years.

But I don't think there are many people satisfied with the level of congestion downtown. So I'd like to move it faster. Fundamentally, what it boils down to is choices. So in city after city, when you provide people choices that are walking or taking transit, biking or carpooling, people wind up taking those. DC has done a great job of investing in transportation choices, whether it's bus or train or bike or walking or the pedestrian environment. They've added 75,000 residents over the past 15 years and car registrations have dropped by 3,000.

So that's a model?

Yeah. If you can go out of your house and walk to the grocery store and walk back, that's... I think Dan Savage on the Slog said something about people who walk are the happiest commuters.

We have a lot of people on Slog who feel that way.

I mean, there's data that shows that the people who walk are the happiest commuters. You look at San Francisco, it's added around 11,000 houses. Only 1,500 of those households have cars. The percentage of households without cars has actually increased in San Francisco. So I think when you provide high-quality options for people, they want to use them.

But what that means is that if you do have to drive somewhere—and a lot of people have to drive for one reason or another—it makes it easier for them to get around. When I go back to DC now, it's actually easier to drive and find a parking space than when I moved there. And sometimes I have to drive when I'm there.

How important is it to you that we move away from individual car ownership, in terms of the effect that has on the environment and global warming?

I think climate change is the issue of our generation. And I think it's really cool that here in Seattle, we actually have elected officials who talk that way and recognize that and aren't afraid to talk about it. Our job is to give people choices and let them make the choice that's best for them. When people have the opportunity to make those choices, most people are going to want to walk or take transit. And I think the advent of the phone has changed how people get around. Now, not driving, if you have a smartphone, you can be a lot more productive.

Do you do a climate analysis in SDOT when you're designing projects or implementing? Is that a component of your work here?

I don't know that we do that for every project.

And we've got bike share about to launch. How excited are you about that?

I think bike share is one of the smartest investments a city can make in transportation.

Comments 19
Tags: News Blogs Transportation
The Stranger depends on your continuing support to provide articles like this one. In return, we pledge our ongoing commitment to truthful, progressive journalism and serving our community. So if you’re able, please consider a small recurring contribution. Thank you—you are appreciated!
CONTRIBUTE NOW