Guest Editorial: Racial Disparity Is Real, and so Is the Need for a New Youth Justice Center

As judges, and as people, we embrace the opportunity to work with others to continuously improve our practices until racial disparity is eliminated in the juvenile justice system. The new Children and Family Justice Center approved by voters will provide appropriate court, program, and detention space to accomplish this work.

Let’s be clear about one thing: State law requires the county to operate a juvenile detention center. This is simply not a subject of debate. Having said that, as judges, we strive to detain juveniles as rarely as possible.

As a result of this and efforts at every decision point in juvenile justice system, we’ve seen the incarceration rate of juveniles in the facility drop over the past decade from an average daily population peak of nearly 200 kids to the low 60s. King County now has one of the lowest juvenile incarceration rates of any large county in the nation. 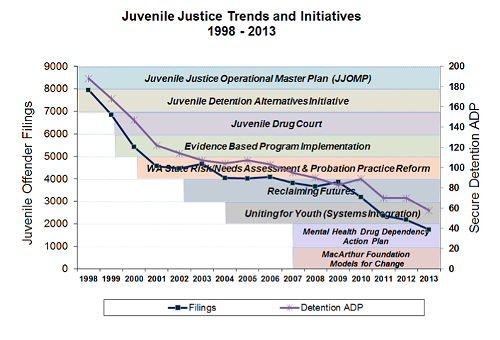 As the chart above shows, there is a clear connection between King County’s work to address disproportionality and a reduction in court involvement for youth of all races.

Court is often the place that families in crisis find themselves first. It can be used as an opportunity to offer help, but the old, outdated Youth Services Center frustrates that effort. The detention section was built more than 20 years ago, during the “get tough on juvenile crime” era. Court ordered detainees are currently housed in a drab concrete and metal structure with water-stained ceilings and leaking windows that convey to a youth that he or she is a bad person no one cares about. We as a region are better than that. 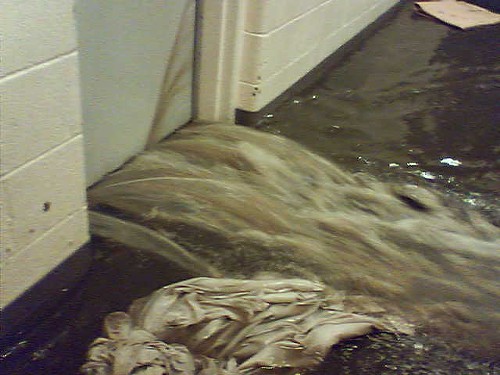 Under the law, the paramount purpose of the juvenile justice system is rehabilitation. King County Juvenile Court is a national leader in developing programs to help youths and families through everything from domestic violence to drug addiction, in spite of the decrepit condition of our building at 12th and Alder.

On the question of whether or not to improve the facility, the public has spoken. Two years ago, by a 55.42 percent to 44.54 percent margin, King County voters approved construction of the new Children and Family Justice Center. Seattle voters gave it 65.07 percent approval. The Seattle City Council Land Use Committee is now considering minor amendments to the Land Use Code to allow the County more design flexibility.

Continuing to operate the inadequate 212-bed existing facility would cost millions in necessary upgrades and excessive operational costs. Designed to run more efficiently, the new detention center will be therapeutic, offering improved youth access to classrooms, outdoor space, and programs. Youths in detention will finally be able to meet privately with counselors. 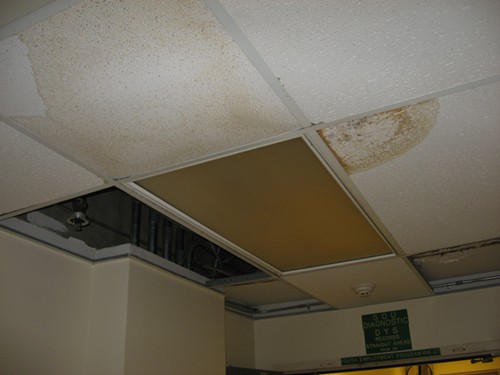 Children who spend time in the child welfare system, including foster care, are more likely to be involved in the juvenile justice system. A study of 4,500 youth in King County juvenile detention between 2006 and 2008 found that 68 percent of the young people had been involved in the child welfare system. Other studies prove that children, especially children of color, are more likely to be permanently reunified with their parent(s) and spend less time in foster care if their case is handled holistically. The new Children and Family Justice Center will be designed to help us do that. Dependency Court focuses on the safety and well-being of children in the system by providing parents access to drug and alcohol treatment, sobriety monitoring, and individualized services for the entire family.

Modern research on the developing adolescent brain indicates that teens do not so much choose to do wrong as act more quickly on impulses than adults. And we’ve learned that the youth we serve have suffered awful trauma in their young lives. This means that detention should be designed to protect youth and the community, not to punish.

The new facility will hold 144 beds for two important reasons. For the youths’ own safety, we must have more bed space than we actually use on a given night to keep separate girls and boys, younger and older kids, and members of rival gangs. We must also plan for population growth over the next 50 years.

When young people are accused of using guns or hurting members of their family, there may be no other safe alternative.

It is not a question of “if you build it, they will come,” and the proof is this: the existing, dilapidated facility already has a capacity of 212, yet we’ve reduced average population to the low 60’s. 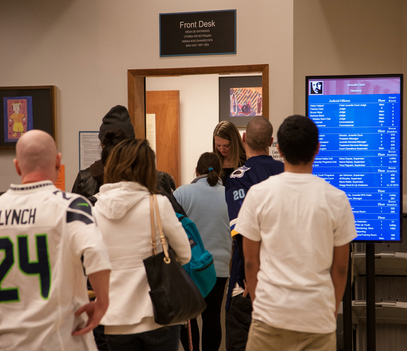 The new Justice Center will respond to these realities by linking families to services they need most. Our juvenile detention facility should be equally responsive to the needs of our youth. And that means we really need to build a new one, just as the voters have already decided.

No one knows this better than judges. Every day we deal with the challenges of providing a safe community, fulfilling our state mandate, reducing inequities of past practices, and analyzing every decision through King County’s avowed strategy of equity and social justice. We are often frustrated with the obstacles the current building presents every day to young people, families, volunteers, and staff members.

We know that investments at “the front end” of a child’s life can help reduce the likelihood of incarceration, violence, and other crises later in life. Last year King County provided more than $100 million in health, education, employment, and housing services to children and families at risk. And just this week, County Executive Dow Constantine called for a regional investment in healthy children, youth, and communities, to assure that every baby born and every child raised in this community has a strong start in life and enters adulthood ready to succeed.

At King County we are confronting our own potential role in disproportionality. We meet with, and have incorporated ideas from, numerous stakeholders including those who oppose the project.

We are working in partnerships that are succeeding in preventing arrest warrants, providing wrap-around prevention services, and improving high school graduation rates. We listen to and have incorporated ideas shared by opponents. We are working with the city to train all staff in King County’s criminal justice system in transformative/restorative justice principles and in exploring ways to add to such programs as our Citizens Accountability Boards. In detention, King County has enlisted a volunteer group to hold monthly forums about institutional racism for youth involved in alternatives to incarceration.

Late last year we met as a court to learn about implicit bias. Earlier this year we read Michelle Alexander’s powerful The New Jim Crow together as a court, judges and staff together, and spent several lunch hours with community leaders to talk about the book's relevance to our role in the justice system. We're continuing to explore this issue, identify changes needed at the state level, and focusing on what our courts can do to limit disproportionate enforcement of criminal laws. This year we've completed two of four sessions led by a cultural anthropologist to explore issues of white privilege and racial cognizance. We expect to continue this self-examination at future superior court meetings.

Still, no single system or jurisdiction can solve the pervasive problem of racial disproportionality in the justice system. Nor can a new building. The current facility is inadequate, outdated and expensive and frustrates the very reforms sought by its detractors.

For more detail, see our website and the following facts that are often misrepresented about the Justice Center project, child welfare, juvenile court, and detention:

• The majority of youth held in detention have committed serious crimes against people or property. Youth are not held for simply shop lifting or skipping school.

• The facility will include a new community resource center open to the public—you don’t have to get arrested to get help.

• A $210 million levy was approved in 2012 by over 65.07 percent of Seattle voters in a countywide approval rate of 55.42 percent. By law, the money can only be spent on the Children and Family Justice Center project.

• Detention will be 25,000 square feet smaller than the current facility.

• The project includes a courthouse and parking garage as well as detention.

• An analysis shows that remodeling or replacing the current detention area will cost about the same: $40 million—continual repair and maintaining the level of staffing needed is not cost-effective.

• The courthouse will be larger than currently; it will have an addition 40,000 square feet and three additional courtrooms.

• Staffing and operational savings are about $1.5 million annually over the first 30 years; most of it from a design that improves detention safety so fewer corrections officers will be needed.

• The conceptual design is the result of lengthy stakeholder process and includes support from neighborhood groups.

Comments 9
Tags: News Blogs City
The Stranger depends on your continuing support to provide articles like this one. In return, we pledge our ongoing commitment to truthful, progressive journalism and serving our community. So if you’re able, please consider a small recurring contribution. Thank you—you are appreciated!
CONTRIBUTE NOW