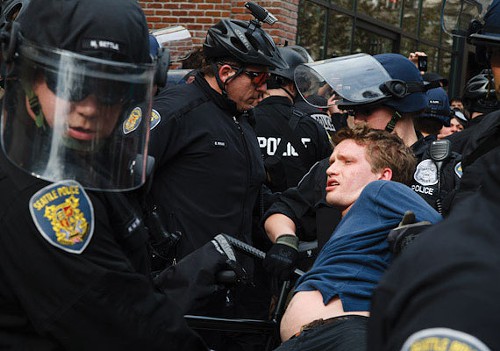 Seattle police believe the grand jury decision on the shooting of Mike Brown—specifically, whether or not to charge the Ferguson, Missouri policeman Darren Wilson for the unarmed 18-year-old's killing—could lead to unrest along the lines of past May Day protests.

"Seattle’s Emergency Operations Center will plan to activate shortly in advance of the decision in much the same way as we have for several years for May Day events," Office of Emergency Management Director Barb Graff said in a November 11 e-mail, sent to dozens of city and county officials and obtained by The Stranger.

In the e-mail, Graff said she expects the decision to come out before the end of the month and hoped for "a little advanced notice." But she said she couldn't be sure about the date. She asked the city officials and various departments—including the Washington State Fusion Center—to identify who they are assigning to the emergency operations center.

The City of Seattle is making a series of planning assumptions, an attached document says, that includes "marches, rallies, protests, and other expressions of civil unrest" which may be "intended to provoke violence" or damage property.

And a member of the Downtown Business Association will be at SPD's Operations Center, according to the document.

Back in April, ahead of this year's May Day, Seattle police predicted there would be turmoil and vandalism as in past years. But the day unfolded pretty peacefully, with police visibly showing more restraint and allowing un-permitted marches to snake through the city.

Demonstrations are already being planned ahead of the Ferguson decision. "Hundreds are preparing... to take to the streets of Seattle" to protest the grand jury decision when it comes, according to a group called the October 22nd Coalition Against Police Brutality, Repression and The Criminalization of a Generation. Their plan is to gather at Westlake Park at 6 p.m. on the day the verdict is announced.

“Whatever the decision, people everywhere must pour into the streets to demand justice for Michael Brown," said Emma Kaplan, one of the group's members. "If the grand jury refuses to indict Darren Wilson for murder, this country must come to a halt. We cannot accept this murdering cop walking free. We will not accept a future where Black lives count for nothing, where our youth will be cut down by police with complete disregard for their humanity. We must pour out by the tens of thousands, and raise our voices in the streets, loudly saying NO MORE!”

Civil liberties activist Andrew Hendricks, who released a report this month on how Washington law enforcement agencies, in his view, have created an "apparatus of repression" of political protests, said the demonstrations shouldn't be seen as threatening. "Preparing for any series of demonstrations as if they are a 'problem' to be solved rather than a duty to be served is telling," he said. "If we really have a civil society, if we really do govern by consent of those governed, then spontaneous demonstrations of upset at how governance has failed are no threat. That these demonstrations are seen as threats is proof that we are ruled rather than rulers."

UPDATE 5 p.m.: SPD spokesperson Sean Whitcomb wants Stranger readers to know that Seattle police don't view the demonstrations as a threat. "It's not a showdown, it's not a conflict," he says. "It's a landmark discussion about race and social justice... They don't need police permission to exercise a constitutional right." He says the emergency operations center has been activated during Occupy, snowstorms and sports events in the past, and suggested that Ferguson-related protests may be "a logistical challenge more than anything else."

Comments 33
Tags: News Blogs City
The Stranger depends on your continuing support to provide articles like this one. In return, we pledge our ongoing commitment to truthful, progressive journalism and serving our community. So if you’re able, please consider a small recurring contribution. Thank you—you are appreciated!
CONTRIBUTE NOW