One of the main organizers for Seattle's "Justice for Mike Brown" movement is a man who calls himself Mohawk Kuzma. He's 24 years old, he describes himself as "mixed—half African American and half white," and he says he's been an activist for four years. "It started with the murder of John T. Williams by Ian Birk," he told me over e-mail. (Birk was never charged with or convicted of murder in that case, though the shooting of John T. Williams was ruled unjustified by SPD's Firearms Review Board and Birk resigned from the force.)

Kuzma says he runs both the Justice for Mike Brown—Seattle Facebook page and the @Justice4MBSEA Twitter feed. According to him, the movement is separate from anything that's being pushed by local anarchists (whose march on Saturday night left broken windows on Capitol Hill) or by followers of the Revolutionary Communist Party, USA. (That's the political organization behind all those Revcom.us posters you might have seen in in the hands of local protesters recently.)

"They're trying as hard as they can to co-opt the Justice for Mike Brown movement," Kuzma told me, speaking of the RCP.

Kuzma, in contrast, is part of what he calls "a community of people wanting justice for Mike Brown." On Black Friday, that meant sending the message that black lives are "more important than shopping and getting the next great deal." But more broadly, it means "no police immunity" and standing "against racial oppression, racism, and police brutality." When he talks about justice for Mike Brown he's talking about improving American democracy so that no one is above the law, and no one is beneath the law. In other words: equal justice under the law.

Revolutionary communism and anarchy are not on the agenda, although Kuzma is familiar with what local anarchists say they want. "To some people, especially anarchists, anarchy is a world with no laws and equal opportunity," Kuzma told me.

How having no laws would result in greater equality for minorities was not explained, as far as I could tell, at last week's protests. In any case, Kuzma said the anarchists at Friday's march were there for one specific reason: "Because they hate capitalism." He referred me to this Facebook page, "hosted by Rita Rage," which called for an "Anti-Colonial, Anti-Police, Anti-Capitalist" presence at Seattle's Ferguson demonstrations.

I attempted to reach "Rita Rage" through her Facebook page, but received no response. It's worth noting, though, that her page's call for action also expressed concern about the Revolutionary Communist Party and spoke of the need to "counter" its influence. "The RCP," says the page hosted by Rita Rage, "does not and cannot control the narrative of resistance to police violence."

The RCP, for its part, claims to have been the group that "called for" last Friday's protest in the first place. ("In coordination with students who have been active around this issue.") Orpheus Reed, a writer for the party's newspaper, told me the party's followers "have been on the front lines against police brutality and murder for decades," and that the group's web site connects protesters to "an analysis of why police murders continue to happen over and over again, why the cops always walk, and why it will require a revolution to get rid of the system perpetrating and enforcing these crimes." I asked Reed about the concerns that his party is trying to co-opt Seattle's grassroots responses to Ferguson. "It's frankly ridiculous to be accused of co-opting actions that you were a part of calling and organizing," he replied. 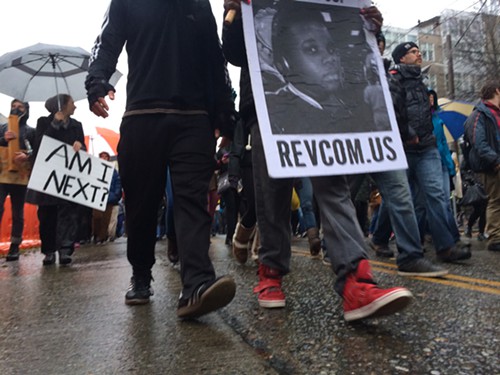 In Seattle, the tensions between those who have been brought into the streets by Ferguson and those who see Ferguson as a means to a prescribed revolutionary end did not begin on Black Friday.

As Brendan Kiley reported here on Slog, the tensions were apparent days before, on the night of the Ferguson decision. As Fadumo Abdirahman, a freshman at the University of Washington (Tacoma branch), put it at a march the night of the decision: "I don't know if they all care about the case, or if they're just here for their own causes. There are a lot of people from different groups here—anarchists, communists."

Then, at Friday's protests, Brendan also reported on a man calling for police body cameras—a technological intervention, not a popular revolution. The man told Brendan he'd been arguing earlier in the day with some of the anarchists in the march. "For me and my little brothers, it's life or death," he told Brendan. "I have little nephews, too. I said, 'For you, maybe it's ideological, high-minded stuff. But for me, it's death.' A cop could shoot me and go home and have dinner. His career would be fine, but my life is done."

And then there was what happened around this dumpster. 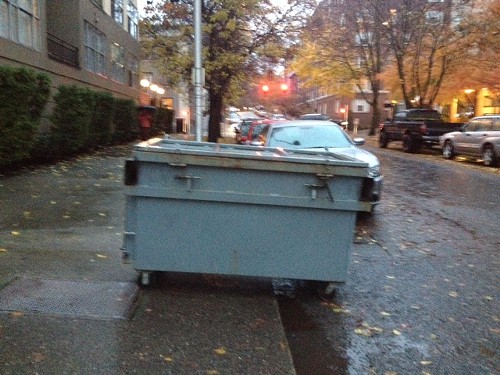 On Friday afternoon, a few hours into the protest, police used "blast balls and sting balls" to try to keep marchers from returning back downtown from Capitol Hill for Westlake Mall's tree-lighting ceremony. (Video here.) Trying to find a way around the police lines, a large group of demonstrators ended up on a side-street that held, in an alley, the above dumpster.

Soon a loud argument about tactics erupted. Men dressed in black, and wearing black bandanas, wanted to roll out the dumpster for use in confronting police, who were downhill from them at that point. Seeing what was about to happen, a woman of color yelled at them to stop, and kept on yelling. The men eventually did stop, but she and her friends soon left the protest in disgust, saying they didn't want to be blamed for stuff like this, that it would reflect badly on everyone.

Later on in the evening, after protesters had made their way down to Westlake despite the police lines, and after the Christmas tree lighting ceremony had been disrupted, a small group of protesters stood on the Westlake Mall balcony and chanted, "Anarchy! Anarchy!" From my vantage point, all the people shouting "Anarchy!" appeared to be white.

Down on the stone pavers in front of the mall, a much more diverse group soon circled up and repeatedly chanted: "What is this about? Mike Brown!"

That group also tried to hold a moment of silence, their fists raised in front of the Westlake Christmas tree, which was ringed with Seattle police officers. At the edge of this crowd of silent protesters, some white guys in black hoods shouted at the holiday shoppers: "Enjoy your slave labor goods!" and "Go run up your credit cards!" The silent protesters shushed them. A black man, one fist still raised, put the index finger of his other hand to his lips for emphasis. After this, the black-hooded shouters quieted down.

It's impossible to conduct a complete census in the midst of roving protests involving hundreds of people. But it does appear, at least to me, that Seattle's response to Ferguson has become an ideological battleground, and that some of its ideological divisions track racial lines.

The ideological confusion alone has left the Seattle Justice for Mike Brown movement having to distance itself from revolutionary communists one day and anarchists the next. And it suggests a situation that the "anti-capitalist," "anti-colonialist" forces might generally be opposed to—a situation in which a mostly-white minority of marchers is trying to capitalize on the frustration and protest labor of a diverse majority that's marching for the difficult aim of equal justice.

Meanwhile, Mohawk Kuzma—no stranger to rough-and-tumble politics himself—is planning another protest. It's called #HandsUpDon'tShootMonday, and it's set for today at 6 p.m. at Westlake Park.