Charlie Hebdo and Piss Christ: On Fear and Self-Censorship and the AP's Dangerous New Precedent

Back in 2006, The Stranger republished four of the controversial Danish Muhammad cartoons.

We weren't alone. Scores of newspapers and magazines around the world republished the Danish cartoons—including many here in the United States, from the Daily Illini, a student newspaper (whose editor was fired), to Harper's, which was yanked from stores in Canada. The satirical French magazine Charlie Hebdo also republished the Danish cartoons, as was mentioned in numerous reports yesterday. The fact that we republished them too is something I should've mentioned on Slog yesterday—you know, after we slapped that big "JE SUIS CHARLIE" banner up at the top of our blog. But I didn't mention it. It wasn't that I regretted our decision to republish the Danish cartoons. I just wasn't in a rush to remind people that we had. Because I was afraid.

Rachel Maddow is afraid, too. On her show last night, she described dozens of controversial Charlie Hebdo covers and displayed an image of each cover as she described it—until she began to describe Charlie Hebdo covers that had Muhammad on them, like the edition that had been "guest edited" by Muhammad ("One Hundred Lashes if You Don't Die Laughing!"), at which point she stopped showing covers. The New York Times is afraid, too. The paper ran photos of two Charlie Hebdo covers in their national edition today: one with a cartoon depicting "immigration critics," another with a cartoon depicting French president François Hollande—but they didn't show any Charlie Hebdo covers with Muhammad on them or any of the Muhammad cartoons that had appeared in its pages. (The NYT's public editor explains the decision: The images "[crossed the] line between gratuitous insult and satire," according to the paper's executive editor. On the cover of today's paper: a photo of a cop being shot in the head—that didn't cross any lines.) CNN hasn't shown the Charlie Hebdo covers either. They're afraid, too.

I was thinking about how afraid everyone is when I heard the Associated Press had yanked all images of Andres Serrano's 1987 work Piss Christ from their website and archives. Before we knew how many people had died in the attack yesterday—before we learned that one of the victims (the one shown on the cover of the New York Times) was a Muslim cop—right-wing news outlets, bloggers, and Twitterers were condemning the AP's supposed hypocrisy and anti-Christian bigotry. Slate:

The Associated Press is among the numerous news outlets that have been self-censoring images of the Charlie Hebdo cartoons that may have provoked Wednesday's deadly Paris attack. In a statement, the news organization said that such censorship is standard policy: "None of the images distributed by AP showed cartoons of the Prophet Muhammad. It’s been our policy for years that we refrain from moving deliberately provocative images." The conservative Washington Examiner publication then pointed out that the AP nonetheless continued to carry an image of Andres Serrano's 1987 "Piss Christ" photograph—which is certainly provocative, having been the subject of massive controversy in the United States, and which was actually vandalized by Catholic protesters when it was on display in 2011 in, as it happens, France.

All images of Piss Christ have since been scrubbed from AP's website—they're all gone, including legitimately newsworthy photos of a vandalized Piss Christ. In an attempt to explain the memoryholing of Piss Christ, the AP says they've "revised and reviewed our policies since 1989." The implication: Piss Christ should've been removed from the AP's website years ago and its presence until yesterday afternoon was an oversight. (Perhaps the AP will send the Washington Examiner a thank-you note for bringing this matter to their attention.) The AP's explanation is complete and total bullshit. They didn't pull down those images of Piss Christ because they were "deliberately provocative." The AP pulled them down because they're afraid.

Here's what the AP should've said to Christian conservatives screaming about Piss Christ and double standards: "Yeah, we blurred out those Charlie Hebdo cartoons because we're afraid of them. We didn't do the same to Piss Christ because we're not afraid of you."

The fact that cartoonists, publishers, editors, photographers, artists, comedians, and satirists aren't afraid of "you"—the fact that they're not afraid to mock Christ, Christians, Christianity—is something that Christians, conservative and otherwise, should be proud of. It's something they're usually proud of. It's something Christian conservatives frequently boast about: "Hey, you don't see us resorting to violence when someone mocks our savior the way they resort to violence when someone mocks their prophet." 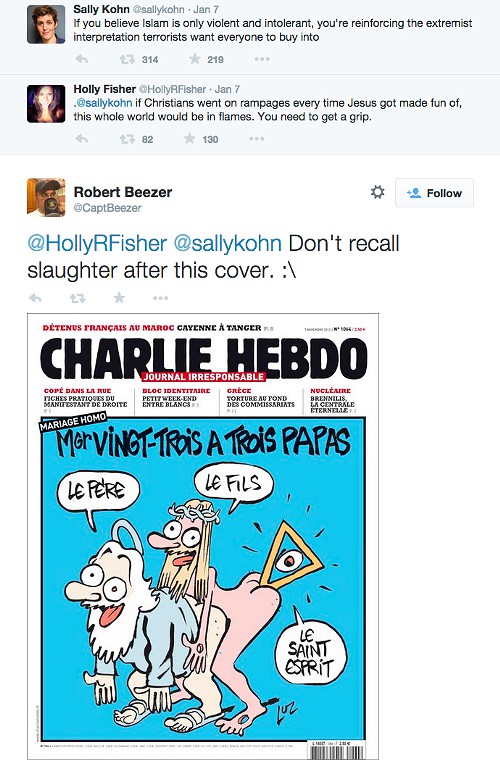 Caroline Wyatt, religious affairs correspondent for the BBC, had this to say yesterday:

In the heart of Europe in 2015, the killing of cartoonists and journalists for allegedly insulting God still comes as a shock, despite the rising number of such attacks in recent years. In rational, post-Enlightenment Europe, religion has long since been relegated to a safe space, with Judaism and Christianity the safe targets of satire in secular western societies. Not so Islam.

It is a credit to Judaism and Christianity that both are safe targets of satire in Western societies. Islam is not a safe target. While the vast majority of Muslims are peaceful—and while some Christians are not—a relatively tiny but also terrifying minority of the world's 1.6 billion Muslims thinks the punishment for an offensive cartoon should be death. And an even smaller percentage of that percentage is willing to carry out those death sentences. And that's why the AP blurs them out and the NYT won't publish them and CNN won't show them and I was reluctant to remind readers that we had published some nine years ago. Fear.

Anyone with a gun or grievance—which means anyone at all. 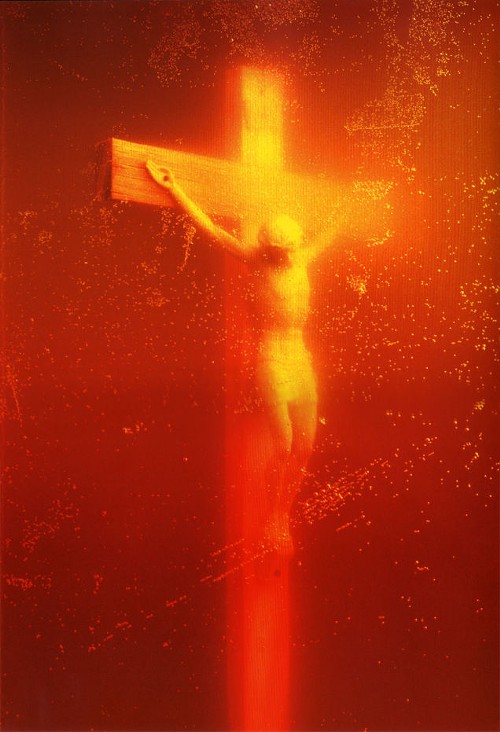 Comments 83
Tags: News Blogs
The Stranger depends on your continuing support to provide articles like this one. In return, we pledge our ongoing commitment to truthful, progressive journalism and serving our community. So if you’re able, please consider a small recurring contribution. Thank you—you are appreciated!
CONTRIBUTE NOW