When ex-Tukwila police officer Corinne Purucker watched this video on Slog the other day, she recognized Cynthia Whitlatch, the Seattle police officer now at the center of a controversy over her arrest, without apparent cause, of an elderly black man walking through Seattle.

In a phone conversation with The Stranger, Purucker agreed to go on the record because her father was a police officer, she said, and "he would want me to do the right thing." Purucker recognized Whitlatch, she said, because she was in a relationship with her for more than two years. During their relationship, Purucker said, Whitlatch made racist comments about black people she'd encountered while on patrol in Seattle and, in the spring of 2005, stole marijuana from SPD evidence that the couple then smoked together.

Yesterday, Officer Whitlatch was removed from street duty over the content of some Facebook posts (a reassignment that comes amid investigations into her treatment of William Wingate, the elderly black man who was on a walk last summer when, the video shows, she arrested him without clear cause).

We contacted SPOG president Ron Smith, who thanked us for sharing these allegations and said he would call Whitlatch on her cell phone right away and convey our desire to speak to her. In an e-mail soon afterward, Smith wrote: "I spoke with her, and she does not wish to speak with anyone and says the allegations are bullshit and that Corine [sic] is a convicted felon and that is why she is no longer a cop."

Corinne Purucker has been a police officer in four different police departments—Tuscon, Arizona; Breckenridge and Denver, Colorado; and Tukwila, Washington. She admits that she's had her own troubles as a cop. Her law enforcement career ended in 2004, when a federal grand jury indicted her for "committing bankruptcy fraud during her time in Colorado," according to the Seattle Times.

The indictment stemmed from Purucker hiding her purchase of a Jeep Grand Cherokee from a bankruptcy court. Not long after her indictment, Purucker said, she resigned. Even after the indictment, Tukwila police chief Keith Haines said, "The Corinne Purucker I know is hardworking, dedicated, a fine police officer of high integrity." And Purucker herself told The Stranger, speaking by phone from out of state: "I own up to it. You are held accountable. And I suffered the consequences. I lost a job that I love more than anything in the world. Because I love helping people. And there are a lot of good officers. But I despise officers who violate people's civil rights... I was taught you had to have probable cause, and no profiling."

According to Purucker, during their relationship Whitlatch "frequently" used the word "nigger."

Whitlatch would arrive home, Purucker said, and say things like "Goddamn niggers again" or "You should have seen what we did to this guy—we jacked him up."

Purucker added, "She had friends in her precinct who were black." But she said Whitlatch talked about black citizens of Seattle's East Precinct differently than she did about black police officers.

Purucker said Whitlatch and other officers (Purucker claims she went on multiple ride-alongs with her girlfriend) would joke about stopping people for "contempt of cop."

Purucker also said that in spring of 2005, Whitlatch "stole marijuana from evidence"—meaning the SPD evidence unit—and they smoked it together at home.

"Even though I wasn't a cop any more," Purucker said, "I kinda went, 'Wow, okay. Well, I don't have anything to lose.' I thought it was kind of stupid of her."

"There are other transgressions and she knows it," she added, but couldn't recall other specific incidents. "She damn well knows it."

"It makes me sick that that gentleman was subjected to it," Purucker said, referring to Wingate and Whitlatch's alleged racism. "That's what hurts."

Purucker said she left the relationship in late 2006.

More photos sent to The Stranger by Purucker are below. 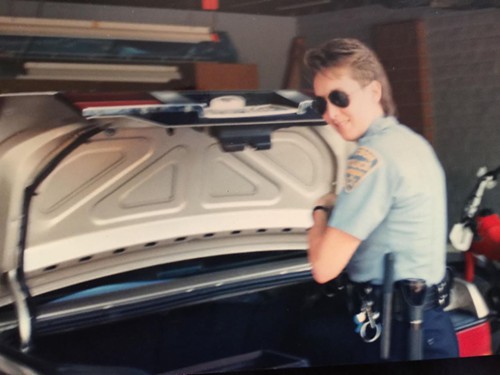 Comments 134
Tags: News Blogs Crime Race
The Stranger depends on your continuing support to provide articles like this one. In return, we pledge our ongoing commitment to truthful, progressive journalism and serving our community. So if you’re able, please consider a small recurring contribution. Thank you—you are appreciated!
CONTRIBUTE NOW