CenturyLink Apologizes for Misleading Customer About Its Gigabit Internet Service 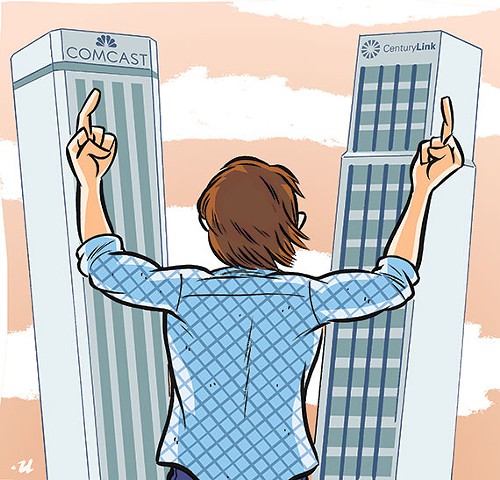 Can CenturyLink and Comcast be trusted to provide basic services like the internet? Robert Ullman

As I've reported before, Seattle desperately needs affordable, reliable high-speed Internet service, and a lot of people are pissed off that the city's two dominant providers—Comcast and CenturyLink—haven't yet made it available in all parts of town. President Obama says he stands behind any city that wants to take matters into its own hands, over those companies' objections, by creating municipal utility-run gigabit broadband networks.

Mayor Ed Murray has said he's considering the municipal broadband option, pending yet another city-commissioned study about its feasibility that's due this month. But he's also said he wants to give CenturyLink and Comcast (both major donors to his mayoral campaign) a chance to "step up" and provide fiber-optic gigabit service throughout Seattle.

In February, CenturyLink sent out a statement saying it had done just that: launched one-gigabit service in Ballard, West Seattle, and Beacon Hill. The company advertises "CenturyLink Fiber 1 Gig Internet in Seattle" online. But following an excruciating experience with a CenturyLink customer service representative, a Seattleite who's moving to Beacon Hill found it's not available.

Earlier this week, Joe posted this transcript of a chat with a CenturyLink representative on Reddit. (He goes by the username joeshirley.) He began by telling the company he was moving to a new address on Beacon Hill. "Could you confirm that fiber is available at that address?" he asked.

The representative responded, "I see that we have Fiber to the Premises available for you."

Joe understood this to mean 1 gigabit speed, as the company advertises. But, after a long and frustrating back and forth, Joe summarizes what the company is actually offering:

Joe: What you have just told me is that what is available to me at this address is copper/DSL technology at 40MBs, and that you have chosen to call that speed by the name "fiber" because you were told to do so. Am I right?

Jaqualon D.: You are correct.

Just for reference, 40 MBs is 4 percent of true gigabit speed. Then, later:

Jaqualon D.: I am sorry, but the 1GB is not yet available in your area. However, we are working very hard to get you that type of speed in your area.

Joe: I would really have appreciated if you had been able to be straight with me at the beginning rather than waste forty minutes of both our time.

"I'm sure," Joe concluded, "that Jaqualon did not intend to deceive. However, his bosses surely know exactly what they were doing in writing their sales templates. This policy to treat customers as sales numbers is what I have objected to ever since my first days on the internet with Qwest."

Joe told me he'd love to see a municipally run broadband network in Seattle. He called his conversation with the CenturyLink representative a "classic bait and switch."

I passed this on to CenturyLink and they sent me this statement:

This incident does not reflect the level of customer service we strive daily to provide our customers and we sincerely apologize... The customer service representative was not aware that the area was still under construction. We are continuing to expand the fiber network in Beacon Hill throughout the year, along with Ballard, West Seattle, the Central District, the International District, Rainier Valley, Delridge and Green Lake.

Here's the thing: Is there any reason to believe that CenturyLink or Comcast would deliver a reliable and equitably distributed level of gigabit service to Seattle, on par with a locally owned and operated utility that's accountable to taxpayers? During a conference call in 2013, CenturyLink's Duane Ring admitted, "We’re a public company. We have shareholders. We have rules and commitments. If you’re smaller, the shareholders are the owners. There’s more flexibility—especially if owners/shareholders are local."

And I think we're all familiar with the horrors of Comcast.

CenturyLink's national budget for upgrading its network to offer gigabit speeds is about $350 million, according to a call with investors in 2013. But Christopher Mitchell, a municipal broadband advocate, points out that the cost of offering gigabit across Seattle is more than that. "How CenturyLink is going to make a dent in Seattle," he said, "when it's spending less than it's going to take in Seattle across the whole country, is beyond me."

Devin Glaser, a member of a group of artists, techies, and activists called Upgrade Seattle that wants the mayor to act on municipal broadband, said Joe's experience illustrates why private companies "can't be trusted to provide crucial services like the Internet."

Comments 32
Tags: News Blogs City Teh Internets
The Stranger depends on your continuing support to provide articles like this one. In return, we pledge our ongoing commitment to truthful, progressive journalism and serving our community. So if you’re able, please consider a small recurring contribution. Thank you—you are appreciated!
CONTRIBUTE NOW