How sHell No! Activists Are Organizing for Nonviolent Direct Action Against Shell's Arctic Drilling Rigs

Technical blockades. Climbing rope. sHell No! activists spent last weekend training for nonviolent direct action, and as they did I got a glimpse of the movement's approach to organizing for a "festival of resistance" against Shell's Arctic drilling rigs in Seattle.

The direct action training weekend had actually been scheduled before the sHell No! coalition came together, part of a series generated for people interested in working on nonviolent direct action with non-white trainers. Saturday, the first day of the weekend training, included various non-environmental groups interested in the same techniques. On Day Two, roughly 40 people from a number of organizations—including Jewish Voices for Peace, the Coalition of Anti-Racist Whites, 350 Seattle, Rising Tide Seattle, Seattle Solidarity Network, and others—largely came together to practice for bigger anti-Shell events this spring.

Two major takeaways from the training: The significant range of ages and experiences involved in the grassroots direct action campaign, as well as the focus and sophistication of the organizing efforts. The sHell No! demonstrators are using something called a "spokes council" model to build out the numbers and consensus on decisions—the same technique used to organize the World Trade Organization demonstrations in 1999. Spokes council meetings are now happening every week.

For people who lived through Occupy's often disorganized general assemblies—which relied on the human microphone—the sHell No! organization model is welcome relief. Jesse Weaver, 26, traveled from Olympia to take part in the training, and said that she also appreciated the fact that there were no distracting debates over the nonviolent nature of the movement. During Occupy, that wasn't always a given. At Occupy Olympia, she remembers hours and hours of discussion over violent versus nonviolent tactics.

"[After Occupy], it did get harder to get involved and be involved with activism for a while," Weaver said. "But I do feel like there's getting to be more energy around being political now, and I don't think it's just around climate change. Seeing all the Black Lives Matter protests since Ferguson has really energized and empowered a lot of people. It makes a lot of people feel like they should be doing something."

It's easier to unfurl a banner across a row of kayaks than you might think. This image, like the others, is from April 17 (not the weekend training, which included groups other than Mosquito Fleet kayaktivists), the day that the Polar Pioneer arrived in Port Angeles. Kelly O

For one activist present at the training who helped organize direct action at WTO, sHell No! also feels like a similar opportunity for Seattle to step up and address an international issue. She asked to use a pseudonym to protect her identity. We'll call her Barbara.

"Even though Shell [was] here before, in 2012, I think people have really changed in terms of awareness in the the importance of immediate action on climate change," Barbara said. "Some of us are protected from some of the worse effects of [climate change] by a lot of privilege, and now I think people are realizing that the really terrible effects are already happening to a ton of people, and we have to be taking action now. The next five years are crucial."

sHell No!, however, has a much shorter timeline to bring in the masses, as opposed to WTO, which had a rather long lead time. But the movement does have another thing going for it. Among Seattle leftists plagued by fractious inner politics, fighting an oil company's contribution to climate change is something everyone can kind of get behind. The Port of Seattle's decision to largely sidestep public input on a controversial decision also sparked Seattle's homegrown activist interest. 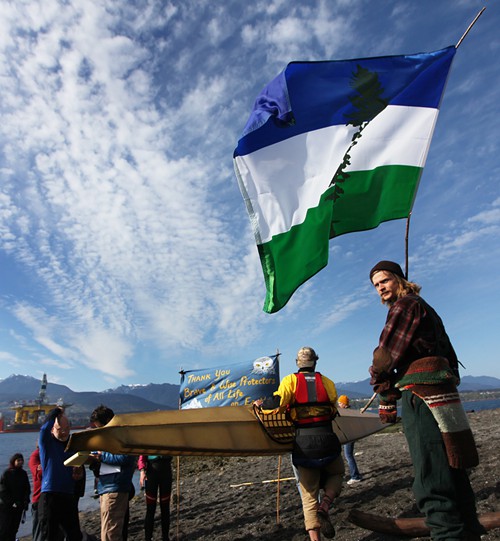 Stu Yarfitz, 66, a 30-year Seattle resident and a retired molecular biologist, told me his role in marches is usually carrying signs. But he came to last weekend's training to learn how to put his body on the line. Part of what motivated him was the recent research showing that big percentages of fossil fuel reserves—including all Arctic oil and gas—need to stay in the ground to prevent surpassing the climate change safety limit of a two degree rise in Celsius.

"How's that going to happen? That's really the key," Yarfitz said. "The oil companies, the fossil fuel companies, they're not going to do it. The politicians, they're not going to do it, unless there's a lot of movement from below, which there may not be. It may be that we're just doing what we're doing and we think we're doing something important, but it doesn't have a lot of impact on anything. But it feels necessary to do it."

Comments 4
Tags: News Blogs Politics
The Stranger depends on your continuing support to provide articles like this one. In return, we pledge our ongoing commitment to truthful, progressive journalism and serving our community. So if you’re able, please consider a small recurring contribution. Thank you—you are appreciated!
CONTRIBUTE NOW