Faces of the Somali Remittance Crisis

Nourah Yonous, 28, of Kent says: "I just don't like the fact that we are all of a sudden disconnected from our families." Jama Abdirahman

It’s been three months since the start of the Somali remittance crisis, when Merchants Bank of California—the financial institution that facilitated 60 to 80 percent of remittance transfers from the United States to Somalia—closed all accounts with Somali money transfer operations [MTOs] and effectively crippled the wiring of an annual $200 million from US-based Somalis to their relatives and loved ones in the Horn of Africa, many of whom rely on those funds for basic living needs.

So far, little has changed.

Local politicians have thrown in their two cents. The city council passed a resolution expressing support for the local Somali community on this issue, and Mayor Ed Murray met with Secretary of State John Kerry when he was in town to discuss the crisis. Governor Jay Inslee sent a letter to Kerry as well. Meanwhile, some members of the Seattle Somali community say small amounts of money can still be transferred through other banks, though only to urban centers like Mogadishu, leaving rural areas isolated. In addition, Eid al-Fitr festivities following the end of the Muslim fasting month of Ramadan will start toward the end of July. It's a time during which many Muslim Somalis living overseas traditionally send money to family back home—a tradition that will be severely hampered without remittances.

But Merchants Bank of California has thus far shown no indications of willingness to continue facilitating Somali remittances. The move stems from the bank’s alleged concern that it could violate federal antiterrorism finance regulations intended to prevent the wiring of funds to extremist militant groups like Al-Shabab. (Somali MTOs are also viewed as "high risk" by banks due to money-laundering concerns.) Critics of the bank’s crackdown argue that cutting off funds to impoverished Somalis will only drive people towards militant groups out of desperation. Oxfam International estimates that over 40 percent of Somalis rely on overseas remittances for survival.

King County is home to the third largest Somali population in the country, and thousands here and overseas are affected by the crisis. We checked in with several members of the local Somali community to see how the ongoing crisis is affecting them.

Ubah Warsame
Age: “Do I have to say?” Ubah laughs, conceding that she’s in her late thirties.
Tukwila
Immigrated to the United States in 1995

A former refugee in Kenya, Ubah—a community activist, medical coach, and patient interpreter at a Tukwila Neighborcare low-income clinic—describes herself as “blessed” because all of her immediate family lives with her in Tukwila, though she occasionally sends between $50-100 to distant cousins back home when they ask. “They [the Tukwila Somali community] don't understand why this is happening," Ubah said. "I wish I had a better answer when they ask me something like that. I tell them, 'I'm just like you. I am frustrated, and I don't understand,'” she said. "It's sad that a lot of people here in America don't even know [about the crisis]," she added.

Mustafe joined his family here in the United States in 2000. Before then he was living with his grandmother in Somalia. He remembers his mother sending him money every month during that period because his grandmother was aging and couldn't work. He is now a full-time student at Seattle Central College and is on the giving side of the remittance relationship. “We help send money back to our families,” he said. “This crisis [has] affected my grandparents [in Somalia] the most because they rely on the money we send back to them monthly. If they can't receive that money, it will really be difficult for them to survive.” 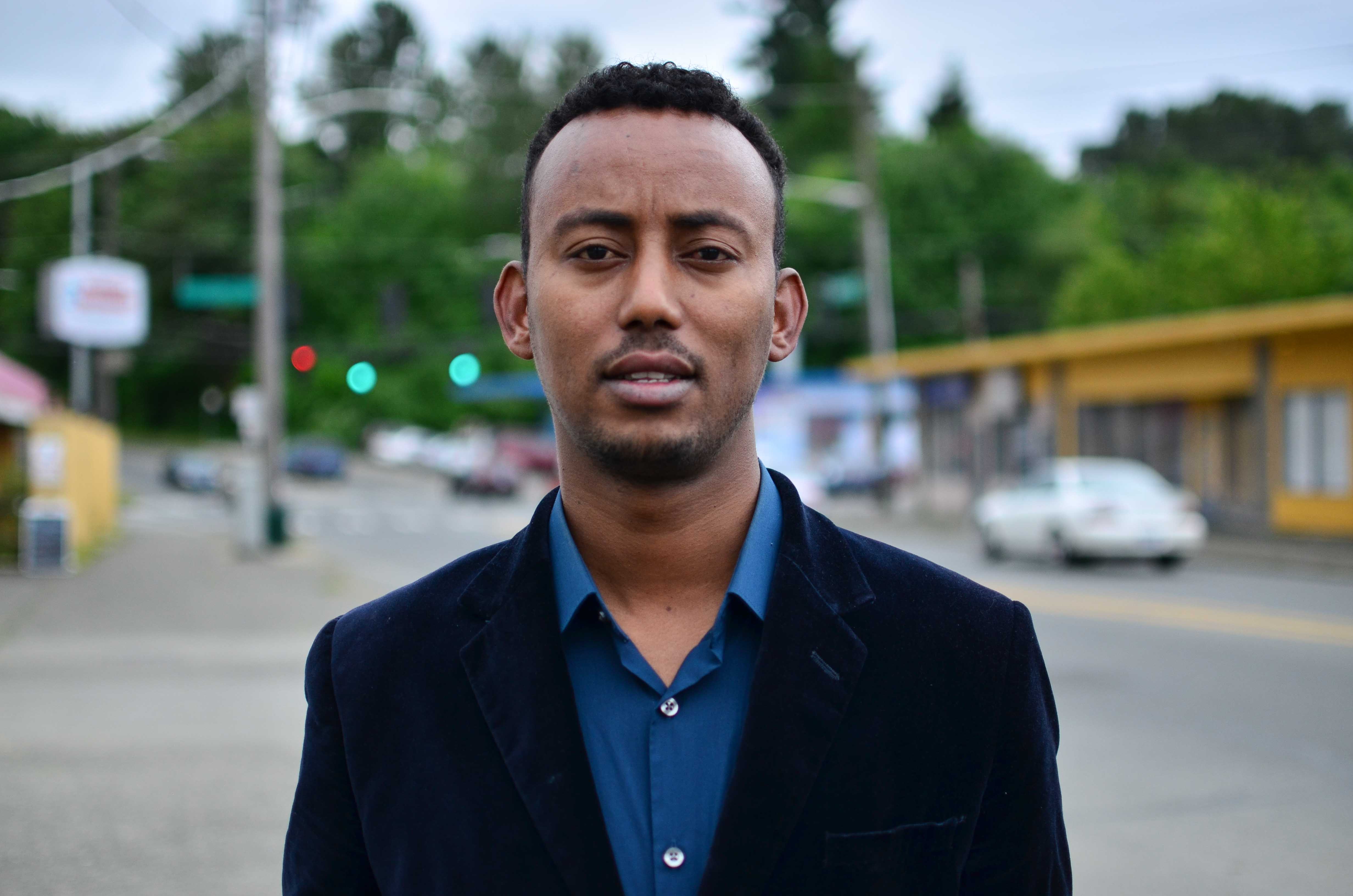 Hassan Diis, like many others, spent his youth in a refugee camp in Kenya after he and his family fled civil war in Somalia in the 1990s. Since immigrating to Seattle he’s been working as the East African liaison for the 37th Legislative District and a community activist. “We're citizens, members of the community, hardworking people," he said. "How can you [banks & the federal government] think we fund terrorists?” He’s frustrated with local leadership and wishes Mayor Ed Murray would engage the Somali community directly in solving the issue, in addition to signing resolutions. “You [the mayor] have to bring your ideas to the community and say, 'You know what, this is how we're going to tackle this problem. This is how we are going to team up with each other’ … [With] no action on the ground, it's totally isolating. Totally miserable.” 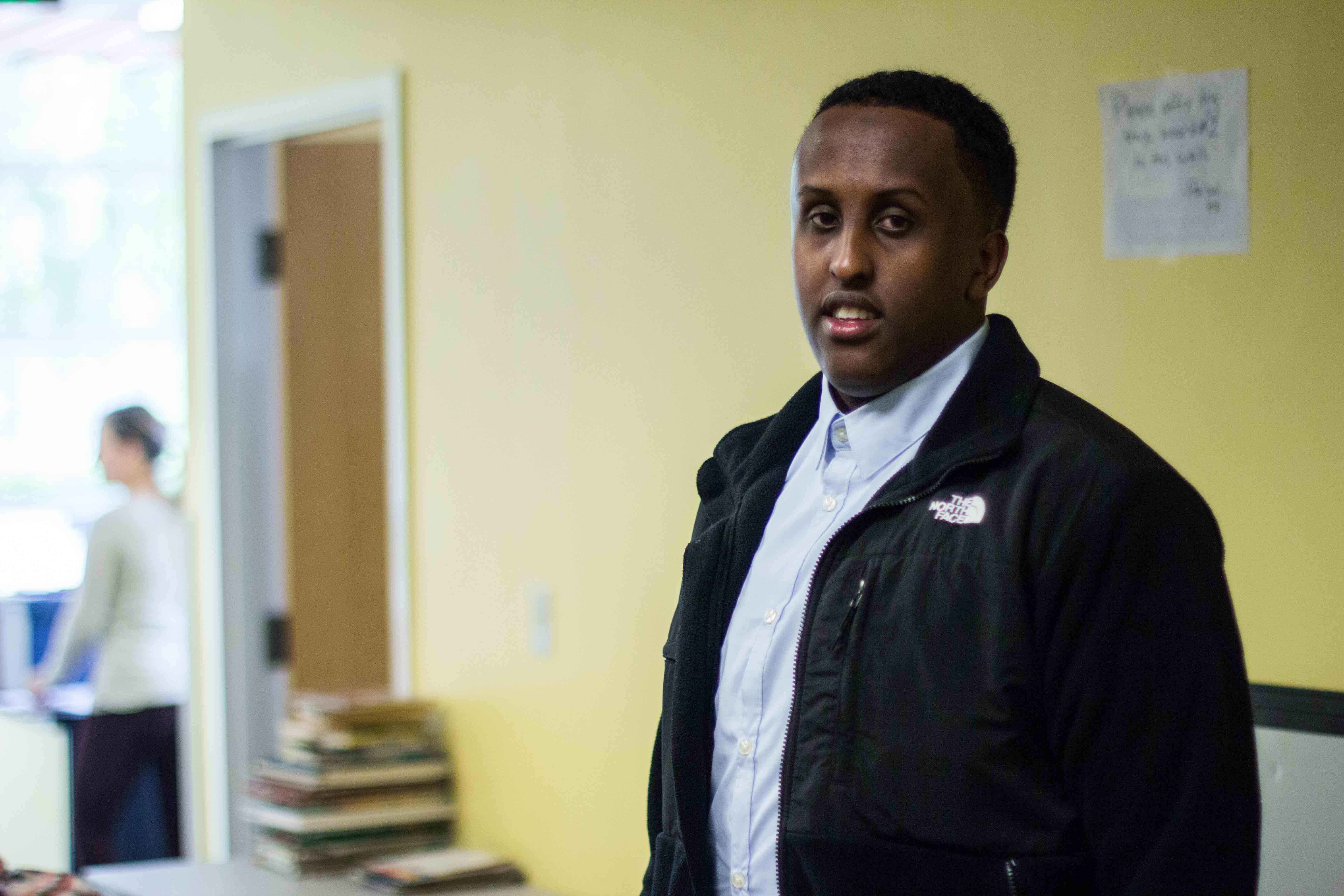 Born in Kampala, Uganda, Yasin Abshir immigrated to the United States in the early 2000s. He’s a University of Washington alumnus with a degree in political science. “My parents and uncles and other extended family send money to my family back home," he said. "It’s stressful. They get calls every day saying they need money. You hear about your family members starving, and we’re not able to help them, even though we are willing to help… It’s really difficult. It’s very hard to deal with, at least for my parents, because I don't send money. But I can see it from them.” 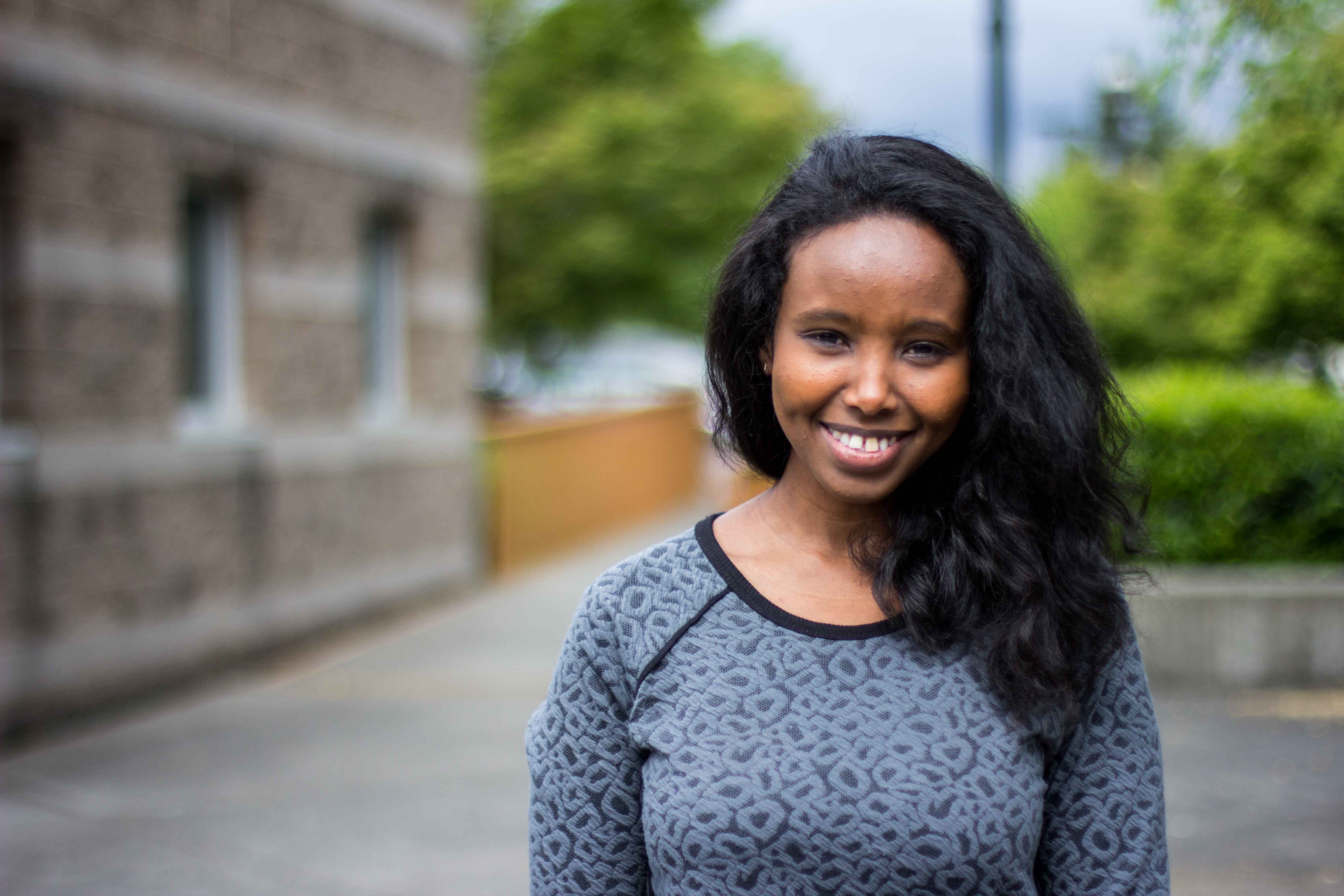 Nourah Yonous
Age: 28
Kent
Immigrated to the United States in 2005

Though Somali by birth, Nourah grew up in Tanzania. She moved to Seattle from California to work with One America—a nonprofit organization that focuses on immigrant and refugee rights across Washington State—in their education department, focusing on early learning. “I have family members back home," she said. "I'm used to supporting one of my cousins who is actually going to university. It [the crisis] actually restricts the diaspora's connection back home. Like, our contribution, our agency … Just because we're here doesn’t mean we’re not connected [to] home. One of the biggest things that connects us back home and [maintains] our relationship with our family members is that lifeline [remittances]. Being able to connect with them through that exchange is huge to us. I just don't like the fact that we are all of a sudden disconnected from our families.” 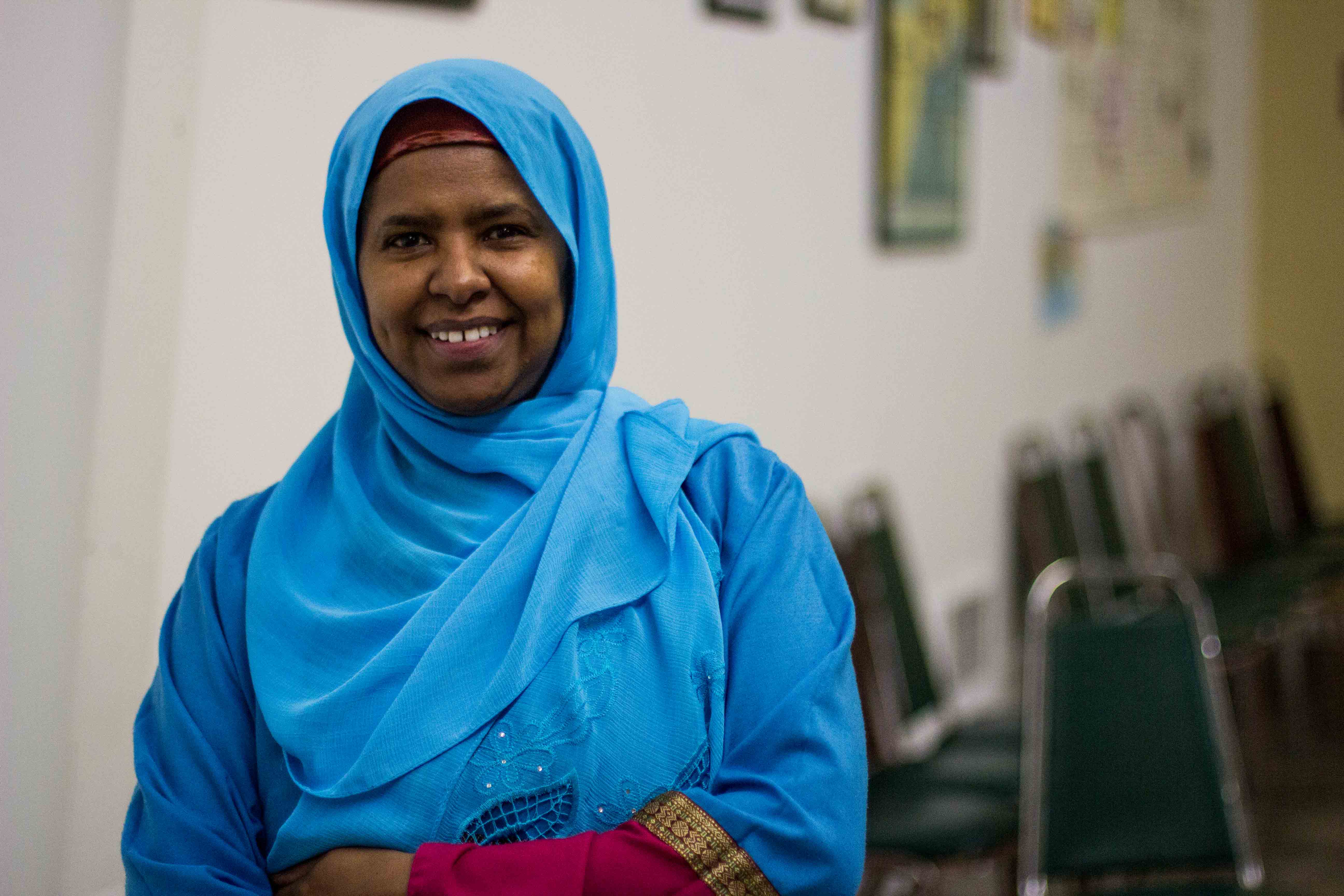 Sahra is an established leader in the Seattle-area Somali community. She founded the Somali Community Services of Seattle in Rainier Beach and has been at its head for over twenty years. “My siblings are still in Somalia," she said. "My mother is here, and she’s always sending money to her children. It’s sad to see your mother, who is seventy years old, worrying about her children and what they are going to eat because she can’t send them money… It’s really painful. Remittances [are] the lifeline. You can't stop someone's lifeline. I really hope Somalia can have its own bank someday."

Comments 2
Tags: News Blogs
The Stranger depends on your continuing support to provide articles like this one. In return, we pledge our ongoing commitment to truthful, progressive journalism and serving our community. So if you’re able, please consider a small recurring contribution. Thank you—you are appreciated!
CONTRIBUTE NOW