It Seems The Stranger's Spells for Edge of the Circle Books Backfired (Or: Thanks for the Dumpster Blaze, Magic Rich)

This is what happens when you let inexperienced wizards named Rich Smith do magic. SB

At 4:41 this morning I woke up to the smell of burning garbage. I walked over to my second-floor window, which was open, and looked down into the alleyway between my apartment building and the one next door. The dumpsters were on fire.

This was not a small fire, and it was getting bigger. Black smoke billowed into my studio apartment. As I fumbled for my phone to call 911, I watched a small piece of lit garbage float into my bedroom and land gently on the window sill. It trembled like a butterfly before curling into a black fist of nothing.

A quick succession of thoughts. The first had to do with something my grandmother has often said: Always wear clean underwear because you never know what's going to happen. "You might get hit by a car," my mother told me, by way of explanation about the underwear, later. None of this ever made much sense to me (If you get hit by a car, wouldn't you probably shit yourself anyway? And does the coroner really care about the state of your underwear?), but suddenly, clean underwear was all I could think about.*

I looked around the room. There wasn't a pair of clean underwear in sight. When someone wrote my obituary, the only thing he or she would be able to say about my short, uninspiring life is that she did not have a supply of clean underwear at her time of death.

A subsequent thought: Oh no, the spells.

And evidently Rich fucked up. 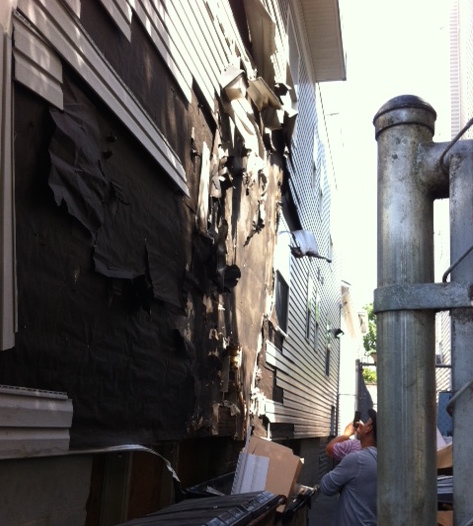 Thanks a lot, Rich. SB

The good news is that the fire department arrived within a matter of minutes to hose down the dumpster fire. People who had evacuated the building with their pugs and boyfriends were able to file back into their apartments shortly after 5 a.m.

The bad news is that my building is cursed.

If you have suggestions for spells to undo the supernatural damage Rich has done, please e-mail them to editor@thestranger.com.

*Frizzelle has called my attention to the fact that Bill Cosby (oy) has a whole routine about mothers and the clean underwear thing. Maybe my grandmother and mother were just referencing that? I don't know. I will ask them.

Comments 3
Tags: News Blogs Horrors
The Stranger depends on your continuing support to provide articles like this one. In return, we pledge our ongoing commitment to truthful, progressive journalism and serving our community. So if you’re able, please consider a small recurring contribution. Thank you—you are appreciated!
CONTRIBUTE NOW