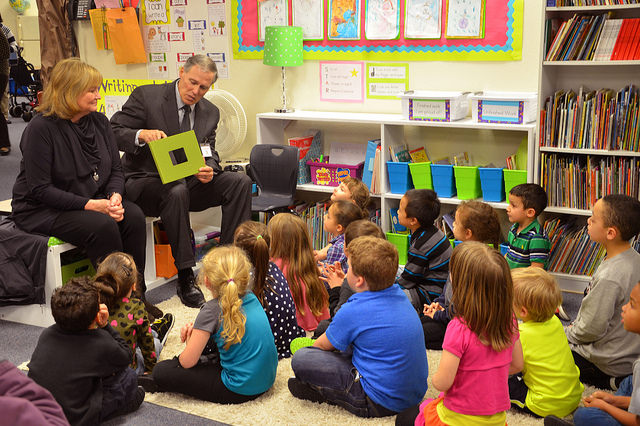 Come Monday, Gov. Jay Inlsee and state lawmakers will be back to fighting over how to adequately fund K-12 education. Office of Governor Jay Inslee

The Supreme Court is Fining the State $100,000 a Day for Failing to Fully Fund K-12 Education: "Despite a record-setting 176-day session and a two-year budget agreement that pushed substantial new money into the K-12 system," write Joe O’Sullivan and Jim Brunner at the Seattle Times, "the court said lawmakers had again failed to live up to what the state constitution calls the state’s “paramount” duty—amply funding schools."

How Would That Fine Be Paid? It's not clear, reports the Times.

Also Not Yet Clear: Whether the Legislature Will Be Called Back In for a Special Session: “At my request, legislative leaders agreed during a conference call earlier today to meet with me Monday to begin the necessary and difficult work before us," Gov. Jay Inslee wrote in a statement. "There is much that needs to be done before a special session can be called. I will ask lawmakers to do that work as quickly as humanly possible so that they can step up to our constitutional and moral obligations to our children and lift the court sanctions.”

What Does the Attorney Who's Worked on the Case for Eight Years Think? "It's about time," he told KING 5.

The Department of Justice Says It's Unconstitutional to Ban People from Sleeping Outside: This is a BFD. The DOJ is weighing in on a case in Boise about that city's ordinance banning sleeping in public places. The Washington Post reports: "Such laws, the DOJ says, effectively criminalize homelessness itself in situations where people simply have nowhere else to sleep...By weighing in on this case, the DOJ's first foray in two decades into this still-unsettled area of law, the federal government is warning cities far beyond Boise and backing up federal goals to treat homelessness more humanely."

Police say they've found someone who was "present" at Donnie Chin's murder. Chin, director of the International District Emergency Center, was shot to death in his car late last month. F11PHOTO/Shutterstock

Seattle Police Say They've Arrested a Man Who Was "Present" at Donnie Chin's Murder: "Detectives believe at least two people 'present during the shooting' were at two International District hookah bars prior to the shooting," KOMO reports. "One of those individuals was arrested on an unrelated Department of Corrections warrant and is now in jail, according to police. SPD officials on Thursday were quick to say neither man is considered a suspect or even a 'person of interest' in the shooting, but detectives believe they were at the scene of the crime."

Meanwhile, the Mayor is Defending his Crackdown on Hookah Bars: Some have criticized the effort as racist. Mayor Ed Murray tells KUOW, "If there is a sense that somehow we the city, or I, have misheard the East African community and we should take another look at this because there's an issue of race, I am quite willing to do that...But I also think we need to hear the voices of hundreds of people in East African community who said that they're in a desperate situation."

Pasco's Only Female Police Officer Files Sexual Harassment Claim: "Officer Dawn Persinger claims women aren't respected in the department," reports the AP by way of KEPR-TV. "Her attorney says the attacks on her started soon after joining the department in 1991 and have never stopped. Persinger says the incidents have been as minor as being hit on the rear end with a baton to discussions about sexual activity in the squadron. Over the years, she has filed complaints but has seen no results from those efforts and was demoted after one complaint. Now she has decided to sue."

No word on whether Shell's Arctic drilling rig will address its gross manspreading before it returns to Elliot Bay. Kelly O

Can Shell's Polar Pioneer Return to Seattle This Fall? The city and the port are currently arguing over that issue before a city hearing examiner. "At issue," KUOW reports, "is whether keeping an oil rig through the winter is the proper use of a cargo terminal. The city and environment groups say no. But the port says it has the right to keep ships anywhere on its property, and it doesn’t want the city interfering in its business."

"Running for Office Was Really Distasteful. I Really Did Not Enjoy It." John Roderick talks about his experience running for office on his latest podcast. It starts around the 44-minute mark. Among his thoughts:

To sit in a basement of a community center arguing with your opponent over ultimately, like, insignificant differences in opinion and then when you're done have the energy to race across town in your car to stand in front of a supermarket and hand out buttons to people who are not interested in you—and to do all of it with relish—that is a type. And I am the type that sits and looks at maps in a book about Napoleon and thinks about what that must have meant to the people that were selling grain. And it feels like you want that kind of person to run for office sometimes, but maybe that aperture just is too small or the pressure in the hose is too great.

He's co-hosting a new podcast, by the way.

Comments 12
Tags: News Blogs
The Stranger depends on your continuing support to provide articles like this one. In return, we pledge our ongoing commitment to truthful, progressive journalism and serving our community. So if you’re able, please consider a small recurring contribution. Thank you—you are appreciated!
CONTRIBUTE NOW