But Remle's work didn't end there. Now Remle is urging the city council to pass a resolution that acknowledges the trauma of American Indian boarding schools and supports a federal reconciliation process.

Remle says the idea grew out of planning this coming Indigenous Peoples' Day. Remle realized that several people involved with planning the event—a coalition of Native and non-Native people from the community and the Office of Human Rights—had never heard of the US government's boarding school policy.

"At one point one of our folks started talking about boarding schools, and a good majority, if not all of the non-Natives, hadn't heard of boarding schools," Remle said. "Someone just casually remarked, 'Has the US government even acknowledged this?' And, no. That's what kind of started it."

Two centuries ago, the federal government embarked on a strategy to erase Native American cultures, languages, and religions through the indoctrination of children. The federal boarding school policy, enshrined in President Ulysses Grant's 1869 "Peace Policy," charged individual Christian denominations with "civilizing" children on reservations. By the end of the century, the strategy had shifted to one of isolation. From the 1800s well into the 1970s, the federal government separated an estimated 100,000 Native American children from their families and placed them in militarized—and often abusive—institutions.

Native Americans living in the Seattle area didn't escape the boarding school legacy. Kids as young as five years old were sent to Tulalip Boarding School and Cushman Boarding School, and to Chemawa Boarding School in Oregon. But unlike Canada, which modeled its residential school policy after boarding schools in the United States and eventually paid reparations to boarding school survivors, the US government has yet to formally acknowledge the painful experiences of many who went through the federal institutions.

Brett Lee Shelton, a staff attorney at the Native American Rights Fund and a member of the Oglala Sioux Tribe, believes that Seattle could be the first city to recognize this legacy if Remle's resolution passes. "[To] the best of my knowledge this is indeed very likely the first time an American city would acknowledge the trauma stemming from the federal Indian boarding school era and support a federal policy to study and take responsibility for the consequences," he wrote in an e-mail.

Denise Lajimodiere, president of the National Native American Boarding School Healing Coalition, says that the United States doesn't even have a complete list of the boarding schools that once existed. "Canada knows how many survivors they have," she wrote in an e-mail. "The US has no idea. Boarding schools are still a best kept secret here in the US." 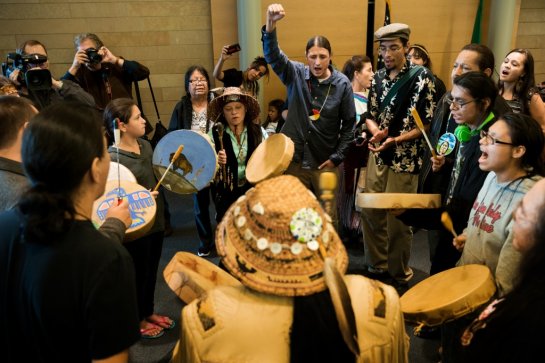 Matt Remle (center, raising his fist) says that the idea to push for a boarding school resolution came out of planning for this year's Indigenous Peoples' Day. Courtesy of Matt Remle

Lajimodiere, who's also a professor at North Dakota State University and a member of the Turtle Mountain Chippewa tribe, has interviewed more than 20 survivors from the boarding school era, three of whom have since passed away. "There is a resounding silence from survivors because of the trauma—mostly sexual abuse," she said.

Canada, which formed a Truth and Reconciliation Commission to study the history of its residential boarding schools, found that at least 6,000 indigenous children sent to the schools died of abuse, disease, fire, suicide, or hypothermia. After six years of research, the TRC concluded in a report published earlier this summer that Canadian boarding schools participated in cultural genocide. The government issued a formal apology to residential school survivors in 2008 and is now paying reparations.

"The supposed goal [of the boarding schools] was to 'Kill the Indian, save the man,' which is tantamount to cultural genocide," Sawant said in a statement. "The new resolution will give City officials the opportunity to acknowledge and help heal the deep wounds opened up by the Boarding School Policy. It is also another step towards getting the City to take real action to address the poverty, oppression, and marginalization that the community faces to this day. My office is still working on the best way to introduce this legislation, but my hope and the hope of the Indigenous community is that we will be celebrating its passage this year on Indigenous People’s Day."

The resolution could spur healing that's long been overdue, says Colleen Echohawk, executive director of the Chief Seattle Club, an organization that provides social services to American Indian and Alaska Native Seattleites. Echohawk says that she sees trauma from boarding schools reflected in the lives of her members, many of whom are homeless.

"I have had family members who have had boarding school experiences," Echohawk, who is Pawnee, said. "I think that the historical generation of trauma is a real thing—a huge, huge, major thing that no one knows about. I feel strongly that people need to know about it."

Echohawk believes that Remle's resolution, if passed, could begin a process of reconciliation not only in Seattle, but across the country.

Comments 24
Tags: News Blogs Politics Indian Country
The Stranger depends on your continuing support to provide articles like this one. In return, we pledge our ongoing commitment to truthful, progressive journalism and serving our community. So if you’re able, please consider a small recurring contribution. Thank you—you are appreciated!
CONTRIBUTE NOW