The "Seattle Speedball" Is Now Actually a Thing

What Happens When You Combine Two of This City's Favorite Things 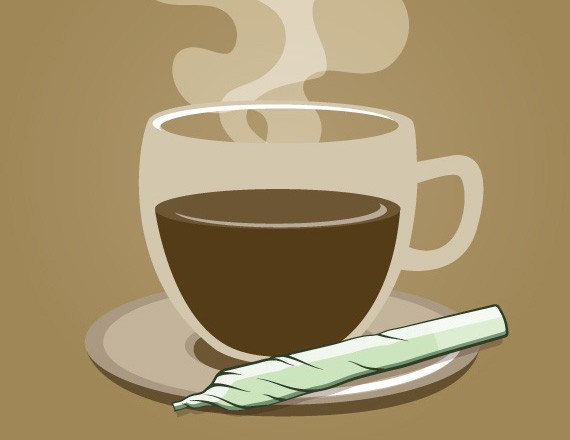 Ingesting weed and coffee at the same time isn't exactly a new concept here in Seattle. I first heard of the "Seattle speedball" in the summer after my senior year of high school, when my obligation-free days usually started with a few bong rips and a trip to Caffe Vita for a couple cups of dark coffee. The coffee counteracted some of the soporific effects of the pot, while the pot reduced the coffee jitters and third-cup anxiety. The combination left me feeling alert yet relaxed. When I gushed to a friend about this perfect pairing, he responded, "Yeah, it's called the 'Seattle speedball' for a reason."

Since that laid-back summer of dank nugs and dark roasts, however, I've largely avoided that combination because my weed tolerance has become embarrassingly low (especially for a pot journalist).

But I was thrilled when I first heard about weed-infused coffee. The format allows me to get high and caffeinated in a way that brings about the same focused, relaxed state I experienced as a teenager. Instead of smoking—which delivers a rush of THC to the brain, either sending me into a dark spiral of anxiety or zonking me out—infused edibles allow the slow release of THC to keep me in a low-key, blissed-out state for hours, actually reducing my anxiety. It's why Juju Joints are so nice—you can precisely control how high you get.

Although there is no science to back up the existence of an "entourage effect" between THC and caffeine (that is, evidence that the two compounds work better together than in isolation), anecdotal evidence suggests there may be something to this combination. Fairwinds Manufacturing, makers of Catapult cannabis-infused coffee, says caffeine has the potential to enhance the effects associated with THC.

In trial groups, with dozens of individuals from a range of backgrounds and with varying marijuana tolerance levels, the results seemed consistent: "Most users experienced an energized THC experience, or a subdued caffeine experience, related to their personal experience with cannabis," the company wrote in a statement. "All our users enjoyed the experience and noticed a more 'sativa-like' high. The negative effects of THC (anxiety, paranoia, disorientation) were not increased in our tests and actually were much reduced. The benefits of this combination clearly outweigh any potential negative effect."

Catapult, which is available at many Seattle-area marijuana retailers, comes in prepackaged Mylar bags, each one containing 10 milligrams of THC and enough ground coffee for a six-ounce cup. Personally, I don't like to drink a tiny cup of coffee, and I'm not at the point where I can drink 20 milligrams of THC yet, but it's easy enough to brew your own coffee and add tinctures. (Fairwinds makes those, too.) However you do it, Fairwinds owner James Hull recommends it: "Caffeine and THC definitely work well together... amazing synergy," he said. He also recommends using an AeroPress in order to extract the full dose of THC (and because it makes great coffee).

John Le, co-owner of Trichome, an upscale head shop in the International District, and cocreator of the Elevated Coffee series, said his formulation produced similar effects. He spent about a year working on his concoction with a friend, carefully adjusting the dosage to create the perfect balance of THC to caffeine. He starts with "Bulletproof coffee"—an emulsified blend of grass-fed butter, Brain Octane Oil, and artisan coffee that's popular with Paleo dieters. (The recipe is actually derived from an ancient Himalayan tea made with yak butter and is supposedly good for boosting energy levels.) In Le's version, he replaced the Brain Octane Oil with THC-infused coconut oil, which can be absorbed quickly, allowing the uptake of THC and caffeine to happen more or less at the same time.

"Response has been overwhelmingly positive," Le said. "The caffeine gets you up a certain magnitude, and the THC gets you down in a certain magnitude. If you balance it out, it's a really nice effect," he said, adding, "There's definitely a speedball effect." Though he had to stop hosting the coffee series for legal reasons, Le is happy to consult with people who want to make their own weedy, grass-fed-buttery cup of joe.

Is weed coffee the perfect marriage of pot and productivity? "We've always held the belief that cannabis is a tool and everyone can use it a certain way to help productivity, be creative, or even do accounting," said Le.

I've often wondered how people employed in the weed industry manage to function in the realm of business so well. I'm guessing it has more to do with massive tolerances and habitual use—one budtender told me he has to ingest a whopping 250 milligrams of THC before he really starts to feel it—but who knows? Weed coffee could be the ganjapreneur's best-kept secret.

Comments 14
Tags: News Weed
The Stranger depends on your continuing support to provide articles like this one. In return, we pledge our ongoing commitment to truthful, progressive journalism and serving our community. So if you’re able, please consider a small recurring contribution. Thank you—you are appreciated!
CONTRIBUTE NOW