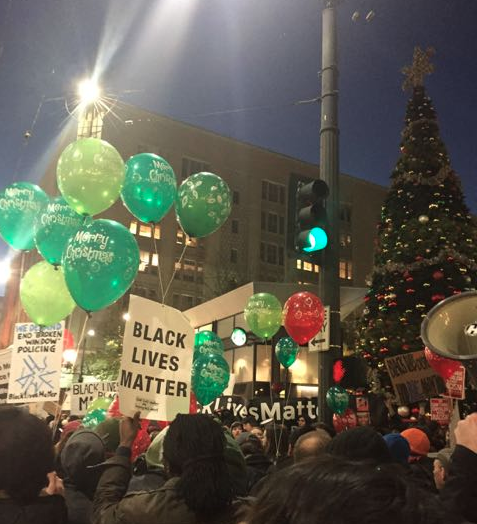 A crowd of several hundred protesters was on the move today in downtown Seattle, marching through the streets around Westlake Plaza, entering Macy's, and trying to enter Westlake Mall and Pacific Place. The Seattle Police Department reported four arrests, and as evening came the protesters made their presence felt at the annual Christmas tree lighting ceremony. Kelly O

More than 4,000 people say they'll be attending today's #BlackLivesMatterFriday protest in downtown Seattle. One year ago, in the first iteration of this protest, Black Lives Matter demonstrators marched through downtown malls, tried (unsuccessfully) to get into the transit tunnel, and ultimately—after a standoff in which police used pepper spray and blast balls—disrupted the annual Westlake tree lighting ceremony. As Ansel Herz writes in this week's Stranger:

Last year, the day after Thanksgiving in downtown Seattle was either a powerful moment for the Black Lives Matter movement or a disruptive shitshow, depending on your vantage point. Whichever way you saw it, be advised: It's happening again, and demonstrators say their Black Friday protest is going to be even bigger this time around

Follow along here on Slog for live updates, or keep up via @strangerslog (where we'll be retweeting what Ansel, Sydney, and Kelly O see downtown).

1:50 pm: A 45-year-old shopper named Patricia, who lives downtown and didn't want her picture taken, told Ansel: "Later tonight is the choir with kids from the foster program. It would be a shame if this cut into that. As far as this, I'm glad they're making their voice heard... As long as people keep it peaceful, I think it's great."

Does Patricia think police brutality is a problem? "In any job, there's people that are good and bad. And there's some that don't understand that force is not the answer."

The chant in from of the Westlake Plaza holiday carousel: "Whose lives matter? Black lives matter!" Sydney Brownstone 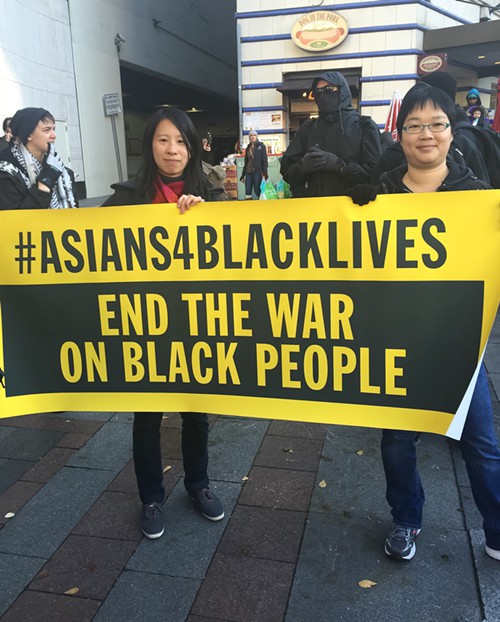 Getting ready to march at Westlake. Kelly O
* * * 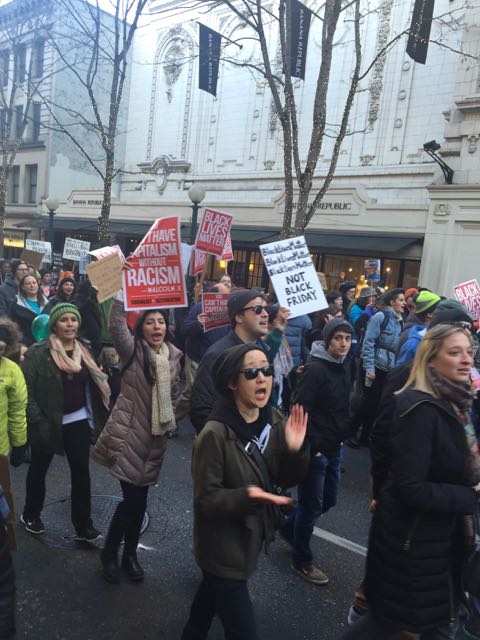 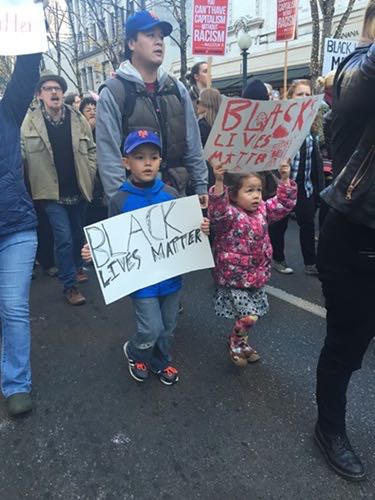 2:13 pm: The march turns west on Pike and heads toward the waterfront.

This guy is going to be late to an appointment, "But it's worth it. I have no problem sitting here," he said. pic.twitter.com/a9IzeASckj
— Ansel Herz (@Ansel) November 27, 2015

2:19 pm: The march turns back north on Fourth Avenue and heads into Macy's:

Crowd is filing into the Macy's. "Hey hey, ho ho, these racist cops have got to go." pic.twitter.com/oBGAfxXLjU
— Sydney Brownstone (@sydbrownstone) November 27, 2015

Frederick, left, was checking out the men's section when #BlackLivesMatter came in. He was shocked/is all for it. pic.twitter.com/RrUm8veeO9
— Sydney Brownstone (@sydbrownstone) November 27, 2015 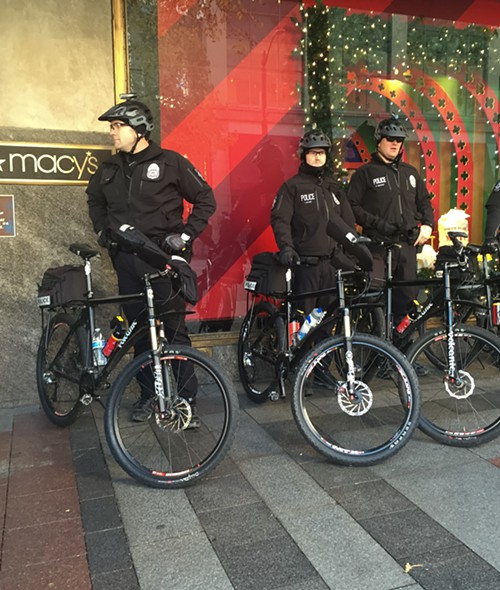 2:45 pm: Standoffs between protesters and security at Westlake Mall and Pacific Place.

Tug of war between protesters and cops at the door. pic.twitter.com/Tms19ciulD
— Sydney Brownstone (@sydbrownstone) November 27, 2015

3:05 pm: Kelly O is inside Westlake Mall where, she says, "Protestors are trying to get in to the north entry of Westlake and beating on the glass doors. I heard a little kid in the Marbles Game Store say, 'Mom this is scary!'" 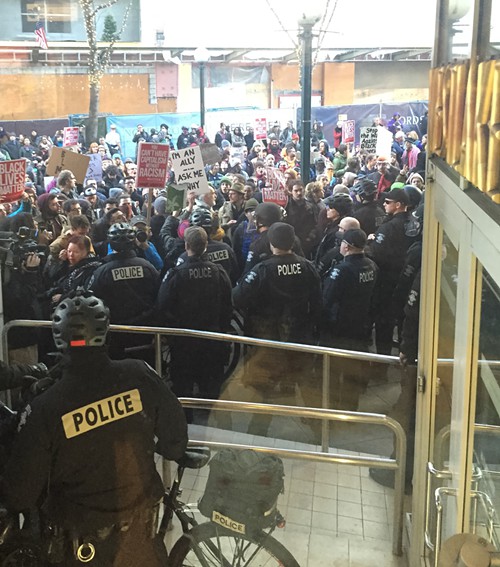 Kelly adds: "This guy made it through the doors, and now he's in handcuffs." 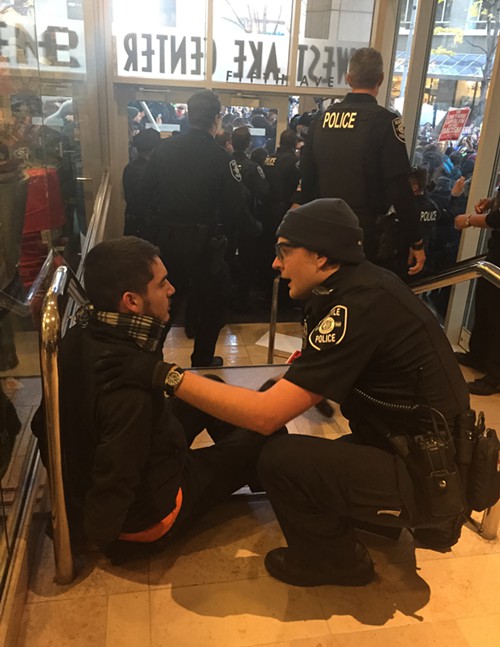 3:08 pm: The SPD reports another arrest: 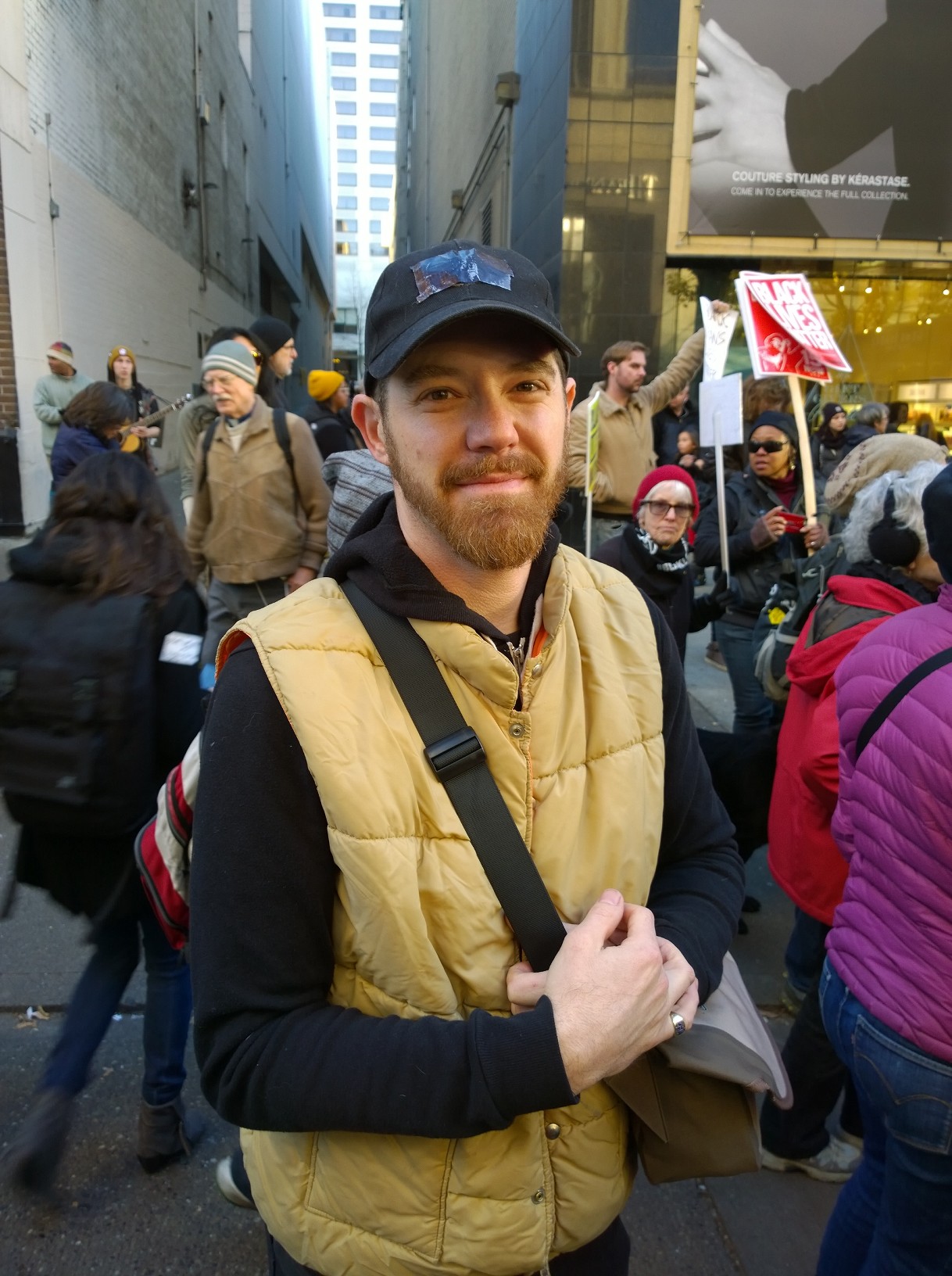 3:34 pm: Ansel spoke to Charlie Redell, 41, who works as a barista at the City Grind espresso stand at City Hall. :This is the movement of our time and we need to fix our society," Redell said.

What about people who say that all lives matter?

"Yeah, but the focus right now needs to be on all African Americans and people of color," Redell said. "It's such a straw man argument and it makes me angry, because its true but it's not the point right now. I want to see fair treatment of everybody... I want to see policing that doesn't single out a person because of how they look and doesn't make anyone afraid. And I want to see that DOJ thing do something good for us and not just be a rubber stamp, which is what it looks like to me."

3:37 pm: Ansel spoke to Auburnee Sanders, 20, an Arizona State student who's home for the holidays. "I'm protesting because of the injustice in our culture and the impunity that allows the police to take innocent lives," she said. "If you're just scared, you shouldn't be a police officer. We put our taxpayer money into this... And we should feel safe when we call them and not be afraid that they're going to kill us because of the color of our skin. There's a large population that doesn't see black lives as equal to others... If there's no justice, we shouldn't have Black Friday. It shouldn't even exist."

3:44 pm: The SPD says an officer was injured while participating in one of the reported arrests:

And here's video of the SPD trying to close a door at Westlake Mall when the crowd wanted to get in:

3:48 pm: Sydney says police seem to be setting up a line across Pine Street at 6th Avenue.

This woman is in handcuffs. No idea what for. Behind line of cops, someone's kicking off tree-lighting festivities. pic.twitter.com/wGabDNOsAl
— Sydney Brownstone (@sydbrownstone) November 27, 2015

4:20 pm: Protesters have made their way back to Westlake for the Christmas tree lighting ceremony:

This guy just tried to start a "Christmas matters!" chant. No one joined him on that one. pic.twitter.com/o1q8duO0NR
— Sydney Brownstone (@sydbrownstone) November 28, 2015

There are like four different #BlackLivesMatter chants going on at the same time. pic.twitter.com/uz75IhUctw
— Sydney Brownstone (@sydbrownstone) November 28, 2015

4:50 pm: The chanting (and fiddling) continues ahead of the tree lighting ceremony. 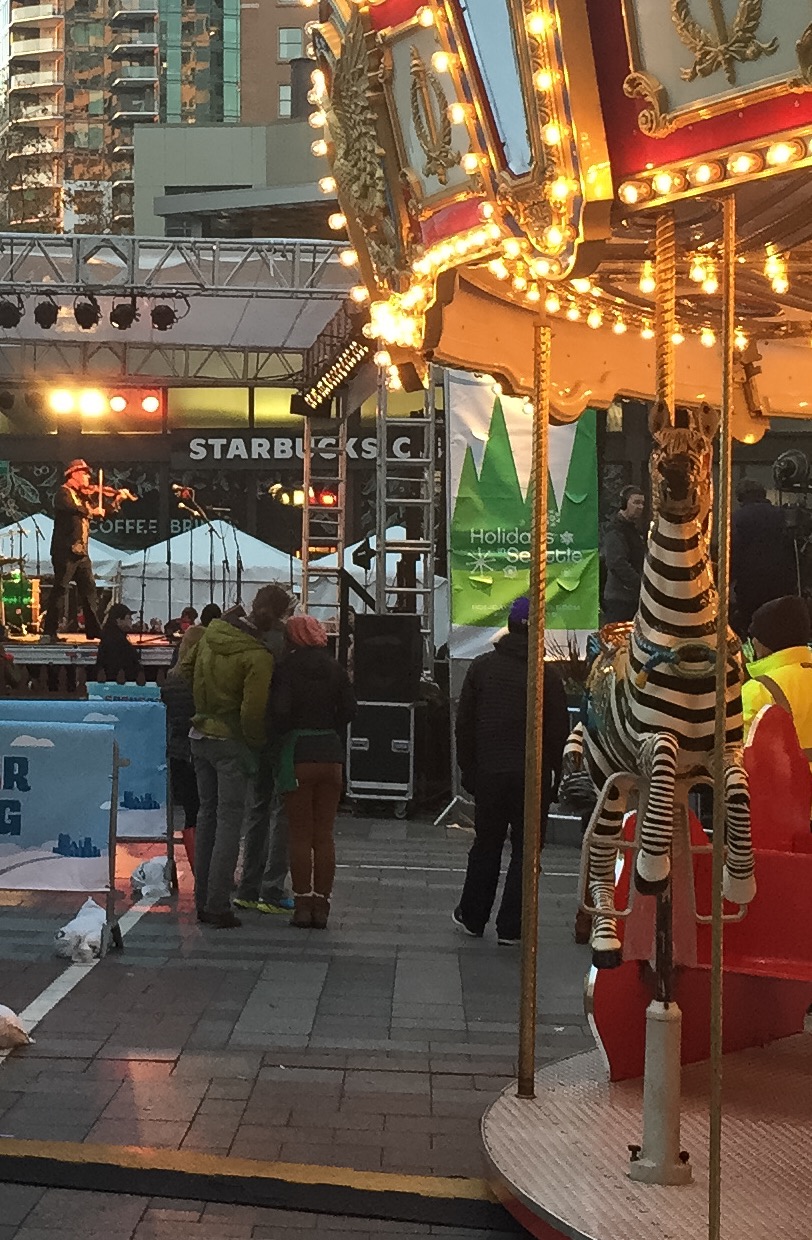 Kelly O reports: "The fiddle player is completely ignoring the fact that there are hundreds of protestors chanting. Now two women are literally river-dancing on the stage with the fiddler. It sounds totally unreal, the chanting and the Irish music together."

5:09 pm: Getting creative with available materials... 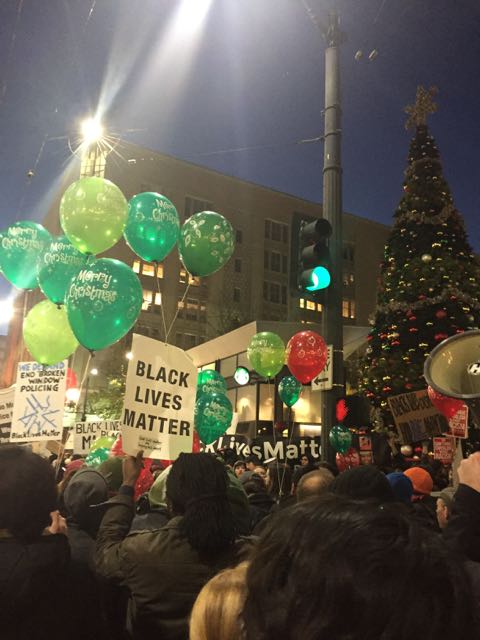 Kelly O reports: "A woman just said, 'What is wrong with these people?!' It seems like all day, women are more offended by protestors." 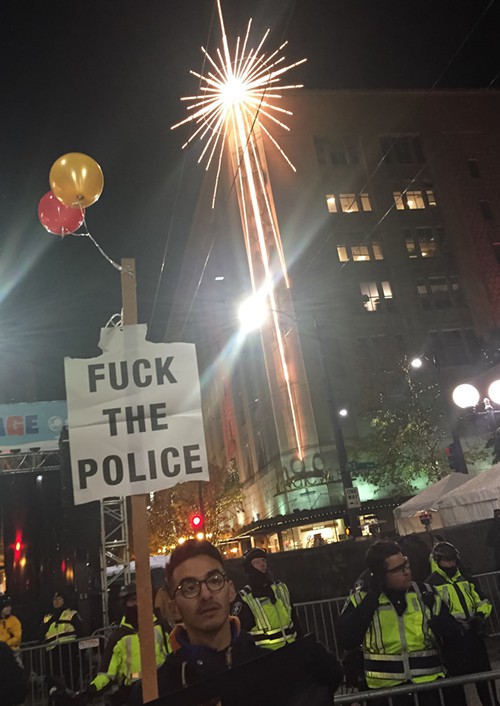 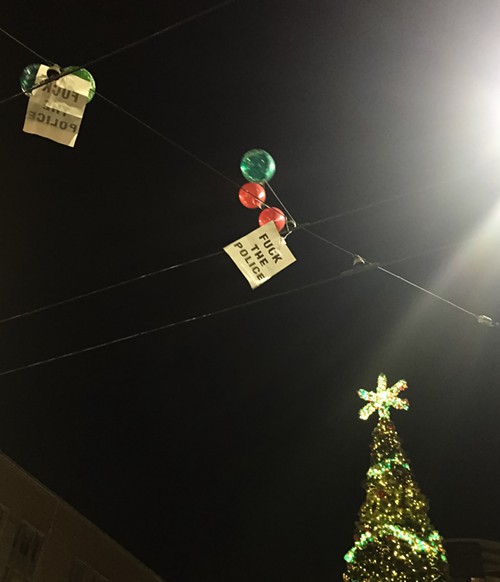 Small group of protesters inside Westlake are playing "Fuck the Police" through a megaphone as cops blocking main entrance to mall look on.
— Ansel Herz (@Ansel) November 28, 2015

Protesters are all sitting in in front of Westlake now, listening to a homeless man speak out on the megaphone. pic.twitter.com/KNYKAyHtqy
— Ansel Herz (@Ansel) November 28, 2015

7 pm: And it's over, according to Kelly, Sydney, Ansel, and the police horses. The SPD's wrap-up:

Hundreds of peaceful demonstrators took to the streets and protested peacefully.

However, officers did respond to isolated skirmishes outside of Westlake Center and Pacific Place, resulting in minor property damage and the arrest of four people. In one case, a bicycle officer dislocated his shoulder when people in the crowd interfered with an arrest outside of Pacific Place. The officer was transported to a nearby hospital for emergency treatment.