Passing of the torch. City of Seattle

For every one decision city council members openly debate in public, about a hundred others get made behind closed doors. Today in that category: Bruce Harrell is going to be the next president of the Seattle City Council.

This has been an open secret for some time, but it became extra clear today when Harrell's office released council committee assignments for the next two years.

(I know. Some tremendously boring shit, right? Too bad! You clicked the post, nerds! Now you're legally required to read to the end.)

On January 4, three new city council members will be sworn in. Then, they'll all take their seats and vote on whether to make Harrell the next council president and on whether they approve of the committee assignments.

Committee chairs help guide which legislation gets to the full council and what it looks like when it get there. Every two years, council members tell the incoming president what they're interested in and then he or she tries to give everyone what they want—or not, depending on how frigid things are on the 2nd floor that day. The council members can also just make up new committees however they see fit. That's how we got Jean Godden's committee on parks, libraries, Seattle Center, and gender pay equity—a combination that makes no sense.

The newcomers—Lorena González, Rob Johnson, Debora Juarez, and Lisa Herbold—got some decent stuff. Most notably, González landed a new committee that includes both gender equity and "new Americans" while Johnson landed Planning, Land Use, and Zoning, which is a big one. 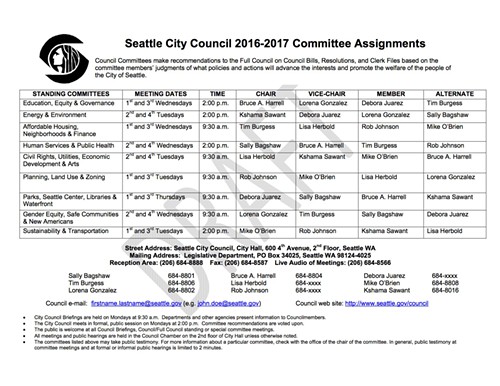 Take note of that Herbold/Sawant/O'Brien combo on Civil Rights, Utilities, Economic Development, and Arts, which could produce some truly radical stuff.

See you in the new year, city council!

Comments 8
Tags: News Blogs City
The Stranger depends on your continuing support to provide articles like this one. In return, we pledge our ongoing commitment to truthful, progressive journalism and serving our community. So if you’re able, please consider a small recurring contribution. Thank you—you are appreciated!
CONTRIBUTE NOW