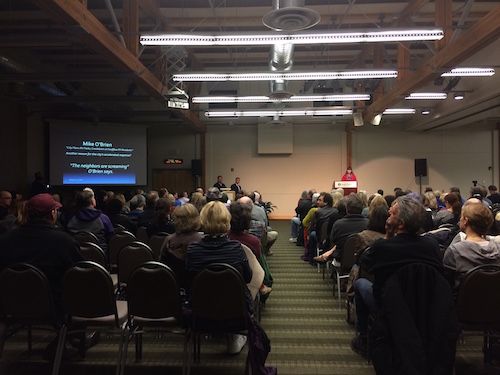 The "Neighborhood Safety Alliance" does not like Mike O'Brien. HG

At a large community meeting last night at Seattle Pacific University, one thing became clear in the ongoing story of Seattle residents complaining about homeless people in their neighborhoods: The core group leading the backlash won't be satisfied until every homeless person living in a car or RV has been removed from their neighborhoods.

"We want to protect these people," Harley Lever, one of the lead organizers behind a group calling itself the Neighborhood Safety Alliance, said about homeless people living in RVs. But a few minutes later, Lever told the crowd of about 200 at the meeting that the city was ignoring a "perfect solution" to homelessness and crime.

"The perfect solution is to ban RVs," Lever said to applause from the crowd.

"Where will they go?" someone in the audience shouted.

"They can go to a KOA park," he replied. Repeating a claim that RVs are "being used as a platform for selling heroin and selling drugs," Lever told the crowd, "We have to stop the in-migration."

At another point in the meeting, Lever invoked recent data showing that 40 percent of people swept from tent encampments accepted shelter as evidence that the remaining 60 percent "don't really care to help themselves."

Last night's meeting was the latest in a series of pleas for attention from this neighborhood group, which claims that the city is ignoring rampant drug use, trash and human waste, property crime, and illegal camping in neighborhoods like Ballard, Magnolia, and Queen Anne. 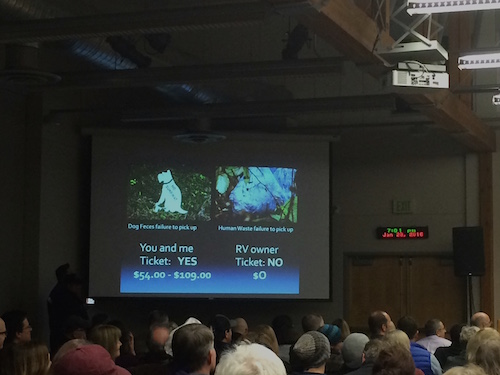 A slide from the NSA's powerpoint presentation complaining that homeless people aren't getting ticketed for having nowhere else to dispose of waste. HG

While more civil than their last big meeting, the themes at last night's meeting were the same. The group blames most of the crime in the neighborhoods on people living in RVs, whom they regularly separate into two groups—the "truly" homeless and those who are selling drugs—despite the fact that anyone living in an RV is homeless. There's little recognition at these meetings of homeless people's humanity.

At a January 6 meeting, the group's proposed solution to their concerns was for the city create a lot where people living in RVs could park safely and then issue a moratorium on any other RV parking.

Here are some of the things the city has done since then:

• Mayor Ed Murray, with help from city council members Mike O'Brien and Sally Bagshaw, announced the city will open two "safe lots" where about 50 vehicles can park and have access to sanitation services. While those are being set up, the city is offering three safe parking zones where they're allowing car campers to park and cracking down on illegal parking everywhere else.

• Last night, SPD Assistant Chief Steve Wilske told the crowd at SPU that as a result of those efforts 70 percent of the RVs in Magnolia have either moved to the temporary safe zones or left the city. He also said the department was stepping up enforcement in Ballard. At the January 6 meeting, he told the crowd that the department had "pulled resources from other parts of the city to try to put extra officers in Ballard and... more towards Magnolia."

• In response to concerns about hypodermic needles, the mayor's public safety adviser, Scott Lindsay, told the group last night that the administration would spend "several hundred thousand dollars" of the one-time money the mayor set aside for the homelessness emergency "just for litter pickup, particularly in the Ballard area." 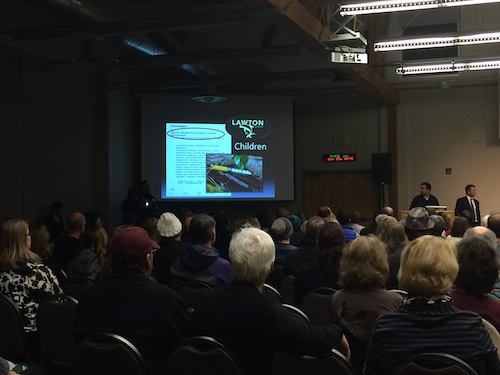 Still, some in the crowd were not satisfied. Lever ended up in an argument with the mayor's staff after repeatedly complaining about the mayor's "a lack of leadership" and the fact that the mayor didn't show up to the meeting himself.

In response, Lindsay grew visibly frustrated. "For you to sit here and attack the mayor after we've just brought all these city resources in and explained all the things we were doing—that's BS and it's not gonna fly," Lindsay said.

After the meeting, Lindsay continued to defend the mayor to a small group gathered around him, explaining to them that the mayor is also facing criticism from social justice advocates and council members for sweeping tent encampments.

"It may not look like it to you," Lindsay told the group, "but the mayor is really trying to move the dialogue forward and he's getting slammed by other folks."

As the city and county are in a state of emergency on homelessness, the mayor is on the defensive against both neighborhoods and homeless advocates. Meanwhile, an annual one-night count of homelessness in King County completed today found 4,505 people sleeping unsheltered across the county, nearly 3,000 of them within Seattle.

In a statement after the numbers were released, Murray said, "Last night’s count reflects what we all see on the streets of our city—that we have a growing crisis of homelessness in our community.”

Comments 57
Tags: News Blogs Housing
The Stranger depends on your continuing support to provide articles like this one. In return, we pledge our ongoing commitment to truthful, progressive journalism and serving our community. So if you’re able, please consider a small recurring contribution. Thank you—you are appreciated!
CONTRIBUTE NOW