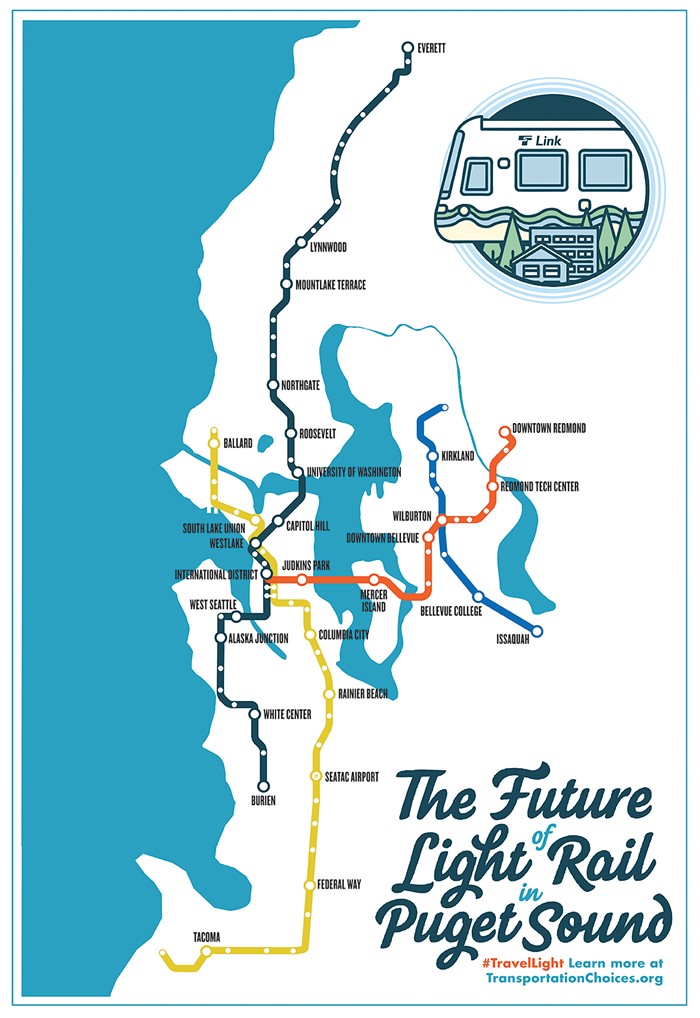 You will be voting on light rail in the fall. And you will vote yes. Transportation Choices Coalition

One thing that makes light rail coming to Capitol Hill less exciting: It should have happened decades ago.

With traffic worsening, new people flocking to the region, and working-class people being forced to the edges, mass transit is an environmental and social-justice issue. And we are far behind in creating a light rail system that serves those who need it most. The longer we all wait for better transit, the farther we sink into the gridlocked, segregated hellscape we're already experiencing. The good news: You can do something about it.

This fall, voters across the region will decide on a massive measure to expand our light rail system even farther. It's known as Sound Transit 3, and in recent months, light rail advocates and lawmakers have wrestled with questions of just how large to make that tax measure, which projects to include, and where the new routes should go.

On March 24, the board of Sound Transit, the agency that builds light rail projects, will release its draft plan for what will be included in Sound Transit 3. But the group that will run the campaign for ST3—Transportation Choices Coalition—is offering an early sneak peak of what it expects the package to include. TCC's map (to the left) is conceptual only, but it's the most detailed look so far at the vote that could drive transit policy in the region for generations to come.

TCC director Shefali Ranganathan says the ST3 package is likely to be a 25-year, $27 billion measure that includes coveted Seattle lines to Ballard and West Seattle, as well as funding to extend rail south to Tacoma, north to Everett, and east to Redmond and Kirkland. Extensions south to Burien through White Center and southeast to Issaquah will likely be included as studies—but without full funding for construction, Ranganathan says.

Also likely: a new tunnel under downtown. In order to quickly run trains through downtown to South Lake Union, Ballard, and West Seattle—and to ease transfers to other lines—Sound Transit is expected to propose another tunnel east of the existing bus and light rail tunnel. That option is more expensive than running the lines above ground, but it results in faster and more reliable trips. (And faster and more reliable trips get more people out of cars and into trains, making the entire system work better.)

One major asterisk in the plan: Kirkland. Right now, that city is in a fight with Sound Transit over whether it gets any rail at all. Sound Transit has planned on running rail along a right-of-way that the agency owns west of I-405 and near some homes. Recently, that right-of-way was turned into a trail while awaiting eventual rail. Now City of Kirkland officials want bus service through the area instead because bus routes would come online faster and are more flexible. Some homeowners near the trail, meanwhile, want neither rail nor buses through the area. Transit advocates see rail in Kirkland as a better option for connecting the whole region and a key political issue: For Seattle to get the rail it wants, we need the suburbs to vote yes, too.

If Sound Transit can negotiate a compromise that keeps Kirkland on board, voters across Puget Sound may be willing to go big on ST3. Collecting taxes over 25 years—instead of just 15 or 20—puts a more expensive package before voters, but it makes the package more alluring with more lines and stations. Plus, Sound Transit has completed recent projects on time and under budget—a massive turnaround from budget debacles in the 1990s and early 2000s.

With buy-in from voters across the region, ST3 could set the stage for a radical change to how people get around Puget Sound. Take Ballard to downtown as one example: Sound Transit estimates that as many as 130,000 people could ride that line on opening day.

"We think the system can be transformative," Ranganathan says. "This is something we can do now and reap the benefits for the next 100 years."

Stay updated about ST3 at soundtransit3.org. You can also e-mail your thoughts to the board at EmailTheBoard@soundtransit.org.

Sodo's Green Light District Just Got Much Easier to Get To

You Know There's a Glut of Weed Shops in Sodo, Right? Cannabis City Is Within Walking Distance of the Light Rail Station, and Ganja Goddess Will Send a Van to Pick You Up from the Station

Now That Light Rail Has Come to Capitol Hill, It's Time to Sell My Car

Related: Does Anyone Want to Buy a Car?