Privatizing the Clearing of Homeless Encampments 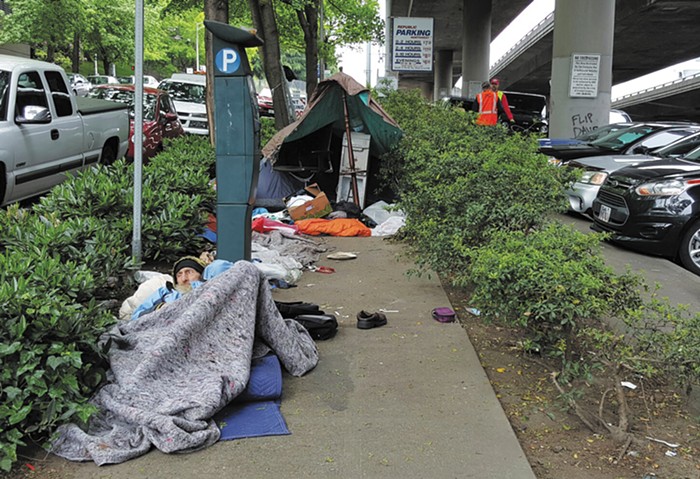 Trashed: Someone lives here. the stranger

The fast-growing, progressive city of Seattle is privatizing some of the work involved in evicting its many homeless people from unauthorized camping sites to a new company—a firm specially created to clear out the places where the homeless sleep.

The company is called Cascadia Cleaning and Removal, and its website advertises "Homeless Encampment Abatement and Removal" services. On a recent morning, I encountered two of their workers manning a trash bin next to a homeless encampment—where an elderly man was still sleeping—on a sidewalk beneath I-5, a few blocks away from City Hall. One worker told me they "toss everything" if no one is around to claim their belongings. He said they would come back again later because the camp was still occupied.

The city is paying the company $240 per hour for "encampment cleanup in designated locations as needed," according to a copy of its contract, $80 per hour per worker in a three-person crew.

Tim Harris, publisher of the street newspaper Real Change, said Mayor Ed Murray had promised homeless advocates he would recalibrate the cleanups (Harris calls them sweeps) in the wake of criticism that they unfairly trash homeless people's property and merely chase the homeless from one location to the next.

"On the other side, the mayor is abdicating responsibility by privatizing the contract for these sweeps," Harris said. "Does he think no one's watching?"

The number of sweeps has skyrocketed from 131 in 2013, the year Murray took office, to more than 527 last year. City officials say they offer the people they encounter shelter options. But they admit that only about 40 percent of people kicked out of illegal homeless encampments end up in city shelters—most are simply shunted to some other location. Homelessness has been on the rise: The 2016 One Night Count found 2,942 people sleeping outside—a 4 percent increase over the previous year. The city funds only 1,600 shelter beds.

I reached Cascadia Cleaning and Removal founder Scott Caufield by phone on May 3, while he was out in the field—in the middle of clearing a homeless encampment in Tacoma alongside police officers. "We just clean the site up," he said genially. "Anything there that's associated with the encampment." Then he said he couldn't talk further right then, but would talk later. He did not respond to follow-up voice mails. Business registration records indicate he founded the company last year.

Some homeless advocates believe CPTED is a form of "hostile architecture"—code for installing sprinklers in places where people sleep or creating benches with dividers that make it impossible to comfortably lie down: The intention is to make the area inhospitable to homeless people. Yurij Rudensky, a staff attorney at Columbia Legal Services who is studying how Seattle sweeps away homeless people and their belongings, said he's alarmed by what he sees on the website. "The idea of 'hardening' areas as a way to combat the homelessness crisis is particularly problematic," he said.

"The fact that we have an environment that allows for this type of cottage industry is troubling," Rudensky added. "When the city sweeps encampments without telling people where they can be and pays $240 per hour to Cascadia for cleanups instead of providing access to restrooms, garbage pickup, and harm reduction, it is frustrating for advocates, expensive, and, in our view, counterproductive."

Scott Lindsay, an adviser to Mayor Murray, defended the hiring of the company. He said Cascadia is involved in trash pickup only "after we've completed the outreach... We are absolutely not outsourcing the removal of individuals." Lindsay said Department of Corrections work crews still do most of the camp removal work at reasonable cost, but due to limits in capacity, "we've also had to bring on private contractors."

Lindsay described a careful process wherein vetted city employees carefully sort through homeless people's belongings. Rudensky and others have described a different scene playing out in practice: trucks pulling up to encampment sites at unpredictable hours and all kinds of stuff being trashed by work crews, including family photos and medications.

For-profit contractors—including two other private firms whose names he did not have on hand—have been used on a total of 12 occasions in 2016, Lindsay said, to carry out what he called "difficult, unpleasant, and unpopular work... So we pay fairly high rates, for sure."

Comments 46
Tags: News
The Stranger depends on your continuing support to provide articles like this one. In return, we pledge our ongoing commitment to truthful, progressive journalism and serving our community. So if you’re able, please consider a small recurring contribution. Thank you—you are appreciated!
CONTRIBUTE NOW