Inside the City's Negotiations with the Police Union 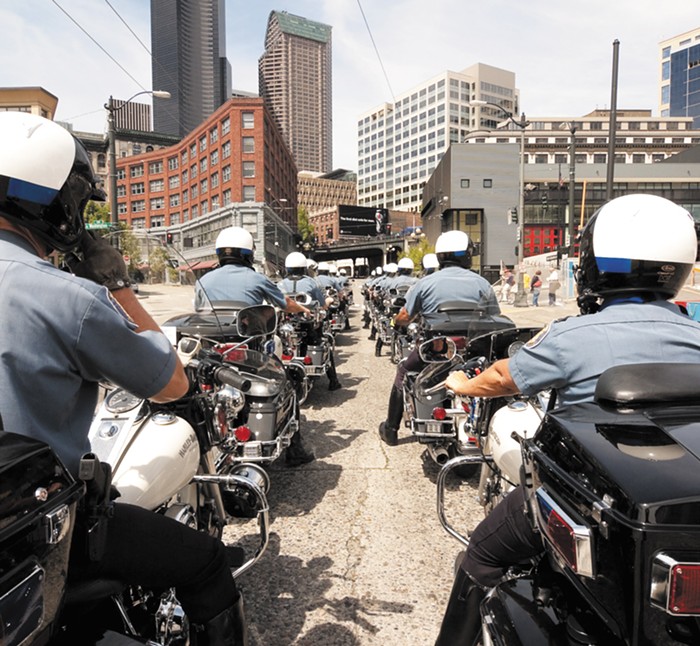 Concerned about police conduct? Want federally mandated reforms addressing excessive force and racially biased policing in Seattle to work? Then you'll want to familiarize yourself with the fine print in the city's latest proposed revision of its 80-page contract with the city's largest police union, the Seattle Police Officers' Guild (SPOG).

Lisa Daugaard, cochair of the Community Police Commission, likened the renegotiation of SPOG's contract to the "Super Bowl" of police accountability.

Hundreds of rank-and-file Seattle officers will be asked in the coming weeks to vote on an updated version of their contract—the product of 18 months of negotiations between SPOG and city officials. The union's board has approved the proposal, which would modify the existing contract and lay down the rules on pay, accountability, and performance for the next four years.

The negotiations can be confidential, by state law. Fourteen pages of internal documents obtained by The Stranger, however, reveal what the city has offered the union and what police officers will be voting on.

One of the most consequential proposed changes is a reconfiguration of the Disciplinary Review Board (DRB), a three-person tribunal consisting of two police officers and one arbitrator.

The DRB considers appeals of disciplinary decisions and has often overridden penalties imposed by the police chief. One notorious example was an attempt to fire Officer Donald George in 2007 after he angrily slammed a teenager's head into a patrol car seat. The DRB reinstated George.

Local and national experts had pushed for the DRB to be abolished.

But according to the documents, the city has proposed heavily modifying the DRB, not abolishing it.

Under the new contract, the DRB would be reduced to a one-person arbitrator selected on a case-by-case basis from an agreed upon list of rotating professional labor arbitrators.

"This is a good sign," said Walker, though he cautioned that professional arbitrators are often reluctant to take strong stands for fear of alienating parties on either side.

Anne Levinson, a retired judge who serves as the city's official police accountability auditor, had recommended the DRB be replaced with a process using randomly selected hearing examiners—and that disciplinary appeal hearings be made open to the public.

The new contract would make the disciplinary hearings open only to "certain outside parties"—members of the Community Police Commission and a citizen observer appointed by the mayor. Ron Smith, president of SPOG, told The Stranger in 2014 he was happy to make the DRB hearings open to the public. It's unclear why the negotiated proposal falls short.

The Seattle Police Department's watchdog agency, tasked with investigating citizen complaints, is the Office of Professional Accountability (OPA). But the OPA has long been hamstrung by the union contract, which required it to use only police officers as investigators, even though the agency is supposed to represent independent civilian oversight. OPA director Pierce Murphy, a civilian, faces mistrust from the community because, as he puts it, "'Why should the police be trusted to investigate themselves?"

A soft-spoken Jesuit who once trained to be a priest, Murphy came to Seattle in 2013. He is widely credited with turning things around at the once-troubled Boise Police Department, where he was able to hire civilian investigators.

In Seattle, Murphy has wanted to utilize a hybrid staff model, using both civilians and police. SPOG has directed a steady stream of vitriol at him in its internal newspaper. In January, it all but declared him an enemy of its members, calling him a "wolf in sheep's clothing." The editor of the newspaper claimed Murphy "has shown little regard for our contract and our rights," and that the department "has very little or next to no major misconduct."

Under the new proposed contract, the OPA would finally be allowed to hire civilians—but only for intake positions. Civilians, not members of the SPD, would interview people with complaints about the police at the first stage of the process. But there's a catch: The proposal would require whoever is hired to have "ten years of sworn experience," effectively limiting the pool of potential applicants to current and former cops. Murphy could not hire civilian oversight professionals like himself. The body of Murphy's staff would remain SPD officers: Police investigating themselves.

Murphy and his small staff still have six months to complete an investigation under the terms of the contract. If he misses the deadline, no discipline can be imposed on an officer.

Looking over the rest of the proposed tweaks to the contract, one wonders, "Why was that even in the contract to begin with?" (The city would no longer pay the SPOG president's salary, the police chief would be given discretion to promote any of the top five scorers on training exams instead of promoting solely on the basis of the exam score, the chief could delegate more responsibility to assistant chiefs when it comes to disciplinary decisions, and more.)

Campaign Zero, a national group that grew out of the Black Lives Matter movement, has analyzed police union contracts around the country. We shared the documents we obtained with Sam Sinyangwe, Campaign Zero's New York–based cofounder. The proposed SPOG contract still contains "many provisions that undermine accountability and are simply not present in many cities' contracts," said Sinyangwe after reviewing them.

On big-ticket items, Sinyangwe believes the city hasn't come up with the goods: "The statute of limitations on [OPA] investigations, allowing discipline to be challenged through arbitration, erasing records of written reprimands, etc.—at least 9 of the 100 largest US cities' contracts have none of these types of provisions (cities like Dallas, Denver, Fremont, Fresno, Nashville, Aurora), and many more have fewer of these provisions than Seattle."

He called the results of the city's negotiations "mediocre at best."

Sinyangwe's criticism stands in sharp contrast to statements from the mayor, police chief, and the Obama administration, which has been touting Seattle as a "national model" on police reform.

Mayor Ed Murray is said to be eager to conclude the Department of Justice consent decree and declare victory in the police-reform effort before running for reelection in 2017. The city council will also need to approve the new contract.

Murray, whose administration handled the negotiations, was endorsed and backed heavily by SPOG as a candidate. When SPOG president Smith blasted the Obama administration for allegedly waging a "war on cops" in a since-deleted Facebook rant last year, Murray condemned the comments.

That was a rare moment of discord between the police union and the mayor.

Comments 4
Tags: News
The Stranger depends on your continuing support to provide articles like this one. In return, we pledge our ongoing commitment to truthful, progressive journalism and serving our community. So if you’re able, please consider a small recurring contribution. Thank you—you are appreciated!
CONTRIBUTE NOW