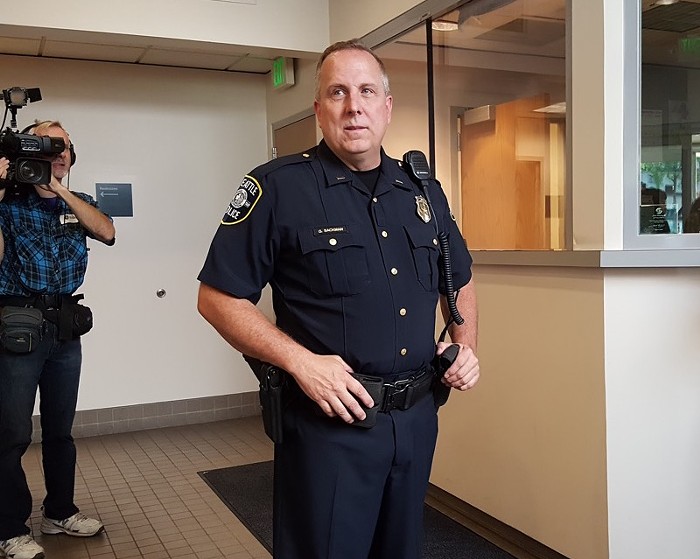 Ahead of a City Council vote on whether to build a $149 million police station, Seattle police led a group of journalists and activists on a tour of the existing North precinct station—the one they say needs replacing because it's old and overcrowded—on Friday morning.

The tour was requested by City Council Member Kshama Sawant, who is opposed to the new station. She emerged from the two-hour tour just as skeptical—though it never seemed like SPD was trying to change her mind.

"Every department has space constraints," Sawant said. "The priority has to be delivering the services, not having the best possible spaces."

The tour went as one might expect. We weren't allowed to take photos in several sections. There's a lobby, a storage room, cubicles, holding cells, and a parking lot out back. The building feels dated and, at times, cramped. But there's also a privately-run gym, available only to dues-paying members, taking up space in one of its largest rooms.

The locker room offered a window into the culture at the North precinct. We weren't allowed to take photos of the lockers because the room represented "semi-personal space."

Tour attendees were moved through quickly. I lingered and saw crude anti-Obama stickers on two separate lockers at one end of the room.

One said, "Bend Over," with the O as an Obama campaign logo, plus "American Sovereign Citizen" in big letters. The other was a cartoon of Calvin, from Calvin and Hobbes, pissing on an Obama O.

I didn't see any pro-Obama stickers.

"The department does not condone that," said SPD Chief Operating Officer Brian Maxey, who also saw the stickers but ushered me out of the room. "That's people's free speech. It's on their lockers... It's not meant to be a public statement."

Pressed about what kind of culture the stickers represent, Maxey backtracked and said he didn't know if officers had a free speech right to place derogatory stickers of that sort on locker doors. "I find it disappointing to see that there," he said. "In light of this tour, we'll be looking at the stickers."

"That feeds into a culture," said Ijeoma Oluo, a writer and Stranger contributor. (More of her thoughts on the tour are here.)

"I would much rather see effort put to toward saying, 'Hey, we're not going to disrespect the first black president of the country in our taxpayer-funded locker rooms'," she said. "That itself feeds an environment that puts people of color at risk. How is the money that you're asking for for a building going to fix that?"

"You know, fundamentally, it's a facility," Maxey responded. "There are space issues and facility issues. Then there's training and culture and values and what you want to have happen in there. The existence of the building can only support the latter—it can't create or define it."

Sergeants, the higher-ranking cops who are supposed to uphold those high standards, need more lines of sight in the station to better supervise frontline officers—both Maxey and Sawant agreed on that.

But another meme, this time posted on the cubicle of one of those sergeants, epitomized the mentality decried by opponents of the new precinct, who've rallied around the hashtag #BlocktheBunker.

Officers at the North precinct spearheaded a failed lawsuit in 2014 that sought to block Department of Justice-mandated use of force reforms. Sergeant Jessica Taylor was one of the signatories.

UPDATE: The crude anti-Obama stickers have been removed, according to Maxey. "Issue discussed with employees," he said in a message. "Doesn't appear to be a policy violation under SPD or city policy... [But] just because they aren't a policy violation doesn't mean they are appropriate."

Comments 74
Tags: News Crime
The Stranger depends on your continuing support to provide articles like this one. In return, we pledge our ongoing commitment to truthful, progressive journalism and serving our community. So if you’re able, please consider a small recurring contribution. Thank you—you are appreciated!
CONTRIBUTE NOW