The City Council wants to close a Jenny Durkan-sized loophole in the police accountability system. 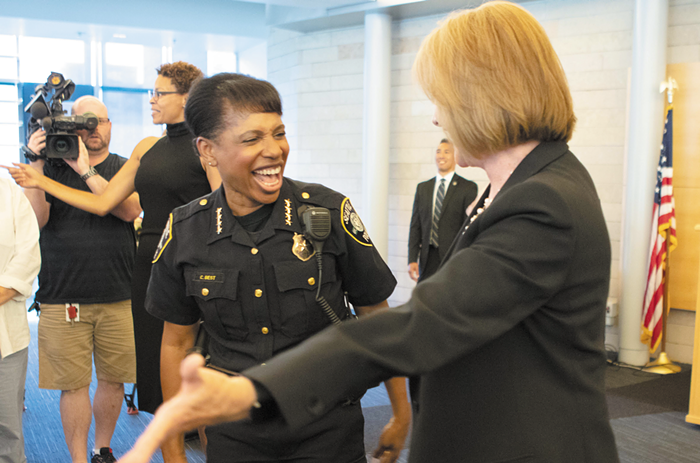 In retrospect, asking the politician who appointed the SPD Chief to investigate that person was laughably naive. Lester Black

While technical updates that amount to basic good governance might not grab headlines, the system failures in former Mayor Jenny Durkan's administration that precipitated this legislation should raise at least one eyebrow, if not millions.

Following the 2020 protests, three complaints to the Office of Police Accountability (OPA) about then-Chief Carmen Best revealed the structural flaws inherent in relying on a mayor’s good faith to hold her chosen police chief accountable. Those complaints accused Chief Best of violating SPD policy when officers continued to use tear gas despite then-Mayor Durkan having issued a 30-day moratorium on the crowd-control tactic. The complaints also allege that Best lied to the public about crime and police activities related to the Capitol Hill Organized Protest zone.

As recent reporting from the South Seattle Emerald shows, those complaints had merit. Then-OPA Director Andrew Myerberg even agreed that the complaints were worth looking into at the time. However, instead of tasking the OPA to investigate them, he referred them to then-Mayor Durkan’s office for investigation by an outside party. According to the recitals in Herbold’s bill, that’s exactly what the OPA manual called for the Director to do in that situation.

What the OPA manual didn't account for is what Mayor Durkan did next. Instead of following through on OPA’s recommendation to secure an outside investigator, Durkan did … nothing. By simply failing to act at all, she effectively covered up any alleged misconduct in which her police chief engaged for the rest of her term in office.

Mayor Bruce Harrell’s administration assigned those complaints to outside investigators earlier this year, nearly 18 months after they hit Durkan’s inbox. Herbold’s bill aims to prevent similar abuses of mayoral discretion by restoring some good old-fashioned checks and balances to the investigation process.

Under the bill’s new process, the Office of Inspector General for Public Safety (OIG) will take center stage in these kinds of politically-charged investigations. The bill grants OIG the power to overrule any of OPA’s recommendations if the two agencies disagree, and it puts strict timelines in place for the OPA to alert the OIG and other City stakeholders once the agency receives any complaints accusing the police chief of misconduct.

In a phone interview, Herbold stressed the importance of adding checks and balances to the oversight of the SPD chief in particular, given that the Chief and the OPA Director both report directly to the Mayor. By contrast, the Chair of the Public Safety Committee on the City Council directly appoints the head of the OIG, which creates some political distance between the investigating agency and the subject of the investigation.

Herbold also emphasized the importance of the OIG’s lead role in the new process, noting that it gives the Inspector General subpoena power to support a civilian-led investigation.

Herbold’s proposed legislation also spells out exactly how the oversight agencies should handle allegations that could involve criminal conduct. That measure would prevent law enforcement officials from playing a farcical game of hot potato like the one they're currently playing over Durkan's and Best’s deleted text messages. According to the bill, the OIG would consult with the newly-established statewide Office of Independent Investigations to determine which law enforcement agency will lead any criminal investigation into an SPD Chief’s alleged misconduct.

At the Council's Public Safety Committee meeting this morning, Herbold said she's still fine-tuning the legislation in consultation with stakeholders from the OPA, the OIG, and the Community Police Commission (CPC). The CPC already secured some tweaks in response to feedback they provided on Herbold's first draft, specifically a clarification that any OPA-led investigation into an SPD chief would be entirely civilian-led.

In an email, a spokesperson for the CPC said the committee still has a few issues with the latest version of Herbold's proposed legislation. They'd like clarification on which non-City entities would be considered for investigating misconduct allegations against the Chief, due to concerns that other law enforcement agencies may have conflicts of interest that could impact the integrity of their investigations. Given that the Council ran out of time in today's meeting to even introduce Herbold's latest draft, her office has time to address those concerns before the substitute bill gets reintroduced in an upcoming committee meeting.

With all of those wrinkles ironed out, Seattle should be well-prepared to investigate the next time an SPD Chief allegedly lies to the public, oversees the use of banned chemical weapons against peaceful protesters, or tries to cover up misconduct by destroying public records.