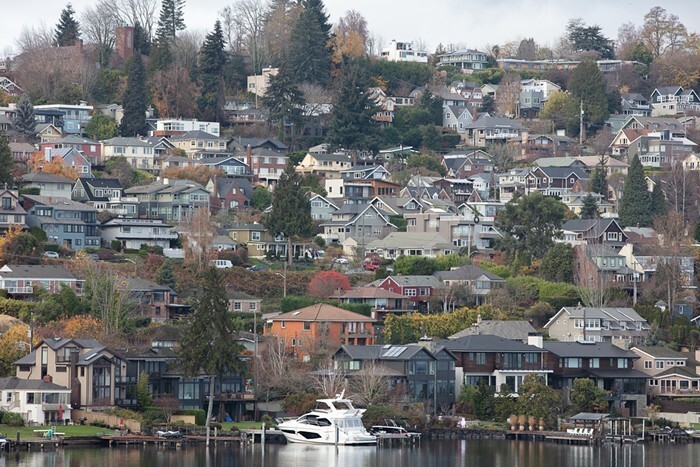 We are pretty sure this is Magnolia. If not, you get the idea. Lester Black

On Tuesday night, a racial equity coalition called Redistricting Justice Seattle (RJS) got great news when the Seattle Redistricting Commission (SRC) revealed its first official proposal for redrawing the city's political boundaries. The commission's proposal heeded many of the coalition’s demands, including its top priority of keeping Asian and Black communities together in majority-minority District 2, which, under the new proposal, would cover the Chinatown-International District (CID), Beacon Hill, Rainier Valley, Mount Baker, and Seward Park.

While the proposal does not reflect all of the coalition’s demands, according to Andrew Hong, the Statewide Coordinator at Redistricting Justice for Washington, the organizers will now play defense to keep the wins for the final version as other groups pick apart the proposal. Magnolia residents, who would be split into two districts under the new map, are already taking issue with their voting bloc on the chopping block.

Seattle’s redistricting commissioners hashed out a joint proposal last night. Very similar to what @RedistrictJWA suggested. Public input until early/mid November, when a new map will be finalized. More to come. pic.twitter.com/Ow4o542AhW

This year, the City tasked five appointed commissioners to draw new council districts to reflect population changes. In the past decade, Seattle’s population grew by over 21%, according to the 2020 U.S. Census. Because some areas grew faster than others, the commission must adjust district boundaries so that they each contain around 105,000 people.

Over the last nine months, the commission held forums for each district, but RJS did not think the commission did enough to engage communities, particularly those in South Seattle. So, the coalition met with those communities on its own and used what it learned to create a map informed by their feedback.

RJS’s map kept the CID and Yesler Terrace in D2 to honor a historical connection between those neighborhoods and other neighbors with large populations of people of color in the South End. The coalition’s map also reunited Georgetown and South Park into a single district, kept the Central District’s historic landmarks in District 3, attempted to center District 4’s young people and renters rather than giving too much power to waterfront homeowners, and kept together in District 5 the diversifying neighborhoods of Lake City, Northgate, and Broadview. Like four of the five “conversation-starter maps” produced by commissioners, RJS also kept intact the growing renter populations in South Lake Union and Downtown by drawing part of Magnolia out of District 7 and placing it into District 6 with Ballard.

The community-made map inspired somewhere between 50 and 100 people to tell the commission to adopt its map in full, Hong estimated.

In the commission’s first official map, it nearly copied the initial proposal from commissioner Neelima Shah, which hit many of the RJS’s priorities.

Shah’s map (left) was drawn as a near replica of RJS’s map (right). THIS IS A HUGE (first) WIN FOR OUR COALITION! pic.twitter.com/r2cJcbxh7j

While RJS would love to advocate for D4 to be a more renter-heavy district, Hong sees the coalition doing less asking and more defending as the commission takes suggestions in three more public comment periods.

While RJS is very happy with the map, many voters from the Magnolia neighborhood are not.

To be clear, it’s not RJS’s fault that Magnolia got diced up. Commissioner and former Seattle Mayor Greg Nickels produced the only map that kept the neighborhood intact, but to do so he had to put the renter-heavy downtown core of D7 into D3, and then carve up North Seattle in a way that divided Lake City, Northgate, and Broadview.

Seeing this coming, Magnolia residents flooded the commission’s public comment period. Over 60 residents from the neighborhood submitted comments last week alone, which was more than twice the number of comments from any other district in that time span.

Many commenters took talking points straight from Discover Magnolia, the neighborhood's Chamber of Commerce, which sent out a newsletter urging community members to provide comments to the commission on behalf of the neighborhood.

According to the Chamber, keeping Magnolia together would meet the redistricting process’ “spirit, intent, and requirements” to preserve neighborhoods. The Chamber argued that tossing the downtown core in with D3 would be easier because the area is “diverse and ever-changing” compared to Magnolia and Queen Anne, which are “long-established.” Finally, the Chamber wrote that keeping Magnolia in D7 would fulfill the commission's duty to recognize the value of “historically important and thriving, vital neighborhoods with similar interests, needs, and contributions.”

Hong said he’s sympathetic to the frustration of Magnolia residents, but because any change, especially one as large as drawing Magnolia into a single district, will only come with major concessions to the map, catering to one of Seattle’s whitest neighborhoods to preserve “their historically significant” area could come at the expense of more diverse neighborhoods.

“Not all neighborhoods can remain fully intact. That's just kind of a fact in this process, and that's unfortunate. But as a coalition, we thought that Magnolia was a community that made the most sense to split, especially when we looked at alternatives of splitting historically marginalized communities,” Hong said.

While the commission is not supposed to gerrymander progressive or conservative majorities in the council districts, Magnolia has a lot to gain politically by staying together. Putting Magnolia in one district, as proposed by Nickels, would slash renter voting power in D7 and consolidate the heavy-renter areas of downtown and Capitol Hill into D3.

RJS wanted to put renter-heavy areas in all districts to reflect the fact that the majority of Seattle residents rent their homes. That kind of representation is especially important, as renters and homeowners tend to vote differently. In the 2021 mayoral election, Magnolia overwhelmingly voted for the conservative candidates, while renters, who tend to live more inland, skewed progressive. If Magnolia can stay whole, then it’ll have a stronger faction of conservative homeowners to elect a council member to represent its interests.

The Magnolia Community Council did not have a statement ready at time of publication, but I will update if it responds.