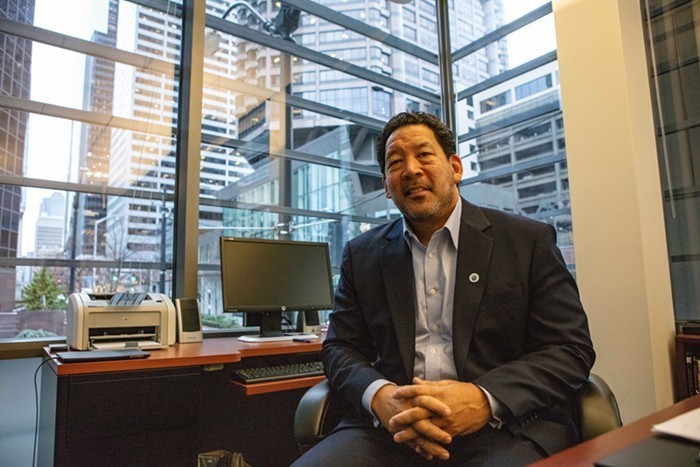 On Monday night, right-wing commentator Jason Rantz published a collection of block quotes from Mayor Bruce Harrell’s speeches at police roll calls. Harrell launched his cop pep-talk tour as an effort to boost morale within the Seattle Police Department, but in doing so it seems the Mayor abandoned his #OneSeattle vision for unity between the City’s executive and legislative branches.

After complaining about his inability to secure support from the majority of the current council during his 2021 run for mayor, he told the cops he aimed to build a council that would support him and his agenda in the 2023 cycle “in order to get the City on the right track.”

Harrell's comments sharply contrast with his campaign promises to play nice with a council that struggled to pass bills under Mayor Jenny Durkan, who routinely picked fights and ground legislation to a halt.

They also contrast with numerous fawning comments from the council members themselves. Since Harrell has taken office, every member but Kshama Sawant has publicly praised the Mayor for his relatively collaborative style. But in his reported remarks to the cops, the Mayor essentially painted a target on the backs of Councilmembers Sawant, Tammy Morales, Lisa Herbold, Andrew Lewis, and Dan Strauss, who supported other candidates over Harrell in the 2021 elections.

“Inexperienced” Council? Get a New One!

As Rantz reported, Harrell said he was already courting two candidates to run against certain council members. Though Rantz did not name candidates, and though Harrell’s office did not confirm their identities, sources told The Stranger that the city's big business faction is recruiting Meta lawyer Rob Saka to challenge Herbold in District 1 (West Seattle) and Seattle Parks Sustainability and Environmental Engagement Manager Chukundi Salisbury to challenge Morales in District 2 (South End).

Neither Salisbury nor Saka responded to requests for comment.

In a text, Morales said she was focused on balancing the budget this fall. “I’m not thinking about whether the Mayor approves of my 27 years of policy, budgeting, and planning experience. Also not thinking about elections that are a year away,” she said.

In a press conference Wednesday morning, Harrell cast doubt on the veracity of all the quotes Rantz attributed to him, but he copped to his criticisms of the council’s experience, a critique he leveled against Morales when she ran against him seven years ago.

If experience-level really is his issue here, and if his idea of experience means serving more than one term on the council, then the potential challengers whose names are circulating right now would not bring the specific experience he claims to value.

The Council the Business Interest Wants

Though they wouldn’t have as much experience, and though they might not even run at all, Saka and Salisbury do appear to align with Harrell on business-friendly policy and modest police reforms.

Salisbury is a longtime advocate for Black communities in the South End. Compared to Morales, the current D2 council member, his recent perspectives on billionaires and tenant issues seem much more amicable to the wealthy than hers.

In terms of policing, Salisbury served on the Seattle Police Department’s African American Advisory Council, and he told the International Examiner that many of his values regarding “equality in justice” come from his mother, Rev. Harriet Walden, an enthusiastic Harrell-endorser who founded Mothers for Police Accountability, a group that aims to improve the police and reduce gun violence.

Salisbury already proved himself a viable candidate for Seattle moderates. In 2020, he ran against Kirsten Harris-Talley for the State Legislature. He earned the Seattle Times endorsement as the “pragmatic” pick over abolitionist Harris-Talley’s “ideological” orientation.

Saka, who would run for District 1 in West Seattle, is more of a political beginner, but his background in giving legal advice to big tech companies could make him attractive to business groups.

Saka has also shown an interest in some police reforms. From 2018 to 2020, he helped the county review its charter along with nearly two dozen others from across the political spectrum. During that process, he and the rest of the committee advanced milquetoast “police accountability and public safety reform” ballot measures that voters eventually passed.

Harrell has already signaled approval of Saka’s public safety takes by appointing him to the committee that’s looking for the City’s next Chief of Police.

If Harrell gets his way and replaces council members who did not initially pledge their undying loyalty to him, the council could become more conservative on the issues of corporate policy and policing. But with the council already voting to approve huge bonuses for cops, how much more conservative could it really get on those issues?