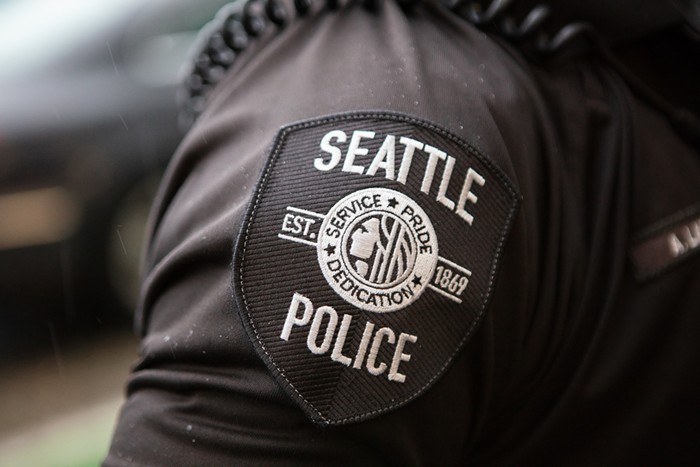 Cops arrested one person in connection with the shooting. Lester Black

At 11 am, the Seattle Police Department (SPD) arrested a male suspect in the ongoing investigation of what is believed to be a "targeted" shooting at Ingraham High School earlier this morning. SPD recovered a gun from the suspect's backpack but cannot say with certainty if it was used to shoot the victim, who died from the gunshot wound at Harborview.

SPD and Seattle Public Schools (SPS) have not shared many details other than a rough timeline. SPD received reports of the shooting just before 10 am and, according to a press release from the department, the police secured the site.

One student wounded after reports of a shooting inside #Ingraham High School in North Seattle @KING5Seattle pic.twitter.com/Fvyo5ibicL

SPS kept the students under lockdown until noon, when they released them from school. According to the district, cops set up a reunification site at Meridian Ave North and North 135th St, where families can meet their children. Officials ask that family members meet their kids at the reunification site and not at the school itself. The district suspended all activities at the school and canceled class at Ingraham for Wednesday.

At a press conference in response to the shooting, Chief Adrian Diaz said he couldn't confirm any of the rumors or claims circulating online. He wouldn't comment on the ages or names of the suspect and the victim or say what led up to the shooting, as the department still needs to review surveillance footage and interview eye-witnesses. The department said they spoke with a person who rode the bus with the suspect, and so far they do not believe that person was involved.

While waiting for more answers, parents, students, and the larger community expressed their anger, fear, and grief on social media.

Our school. Absolutely heart breaking. My kid is ok and still in lockdown. He was lucky to be in gym class so it was relatively easy to lock the doors and secure the kids as best as possible. The gun violence in our country is a public health crisis. https://t.co/Umu8ZYBaln

Many Twitter users hammered home the same sentiment: It doesn’t have to be like this. Some users used the tragedy as another reason to vote.

Absolutely devastated to hear this. I grew up swimming and playing water polo with Ingraham students and using their on campus pool. We need common sense gun responsibility TODAY. If you haven’t voted yet, vote with these students in your heart. https://t.co/jRKIOTdHeF

Absolutely heartbreaking. My office is monitoring this situation and will continue to provide updates and assistance as information becomes available.https://t.co/83FGBiXBrU

I am outraged and devastated to hear about the shooting at Ingraham High School. Enough is enough. We need to get guns off our streets and invest in true public safety that addresses the root causes of crime. We owe it to our children. https://t.co/3IxDdKcDDr

At the press conference, Mayor Harrell said, "We are listening, we are acting. Our hearts are in the right places as well as our policies and all of our actions."

Since taking office, Harrell has expressed interest in lobbying for the authority to regulate guns locally. He also referenced a "holistic approach" in his proposed budget to "address gun violence and to better collect evidence." He means spending over $1 million on ShotSpotter, a controversial gunshot detection software that is not a prevention tool.

Congresswoman Pramila Jayapal pushed the conversation passed gun control laws. She said, "[Congress] passed the first-ever gun safety legislation in 30 years in Congress. But it wasn't sufficient." She emphasized the importance of investing in young people's mental health, who she said need real tools to deal with "ups and downs," not guns.