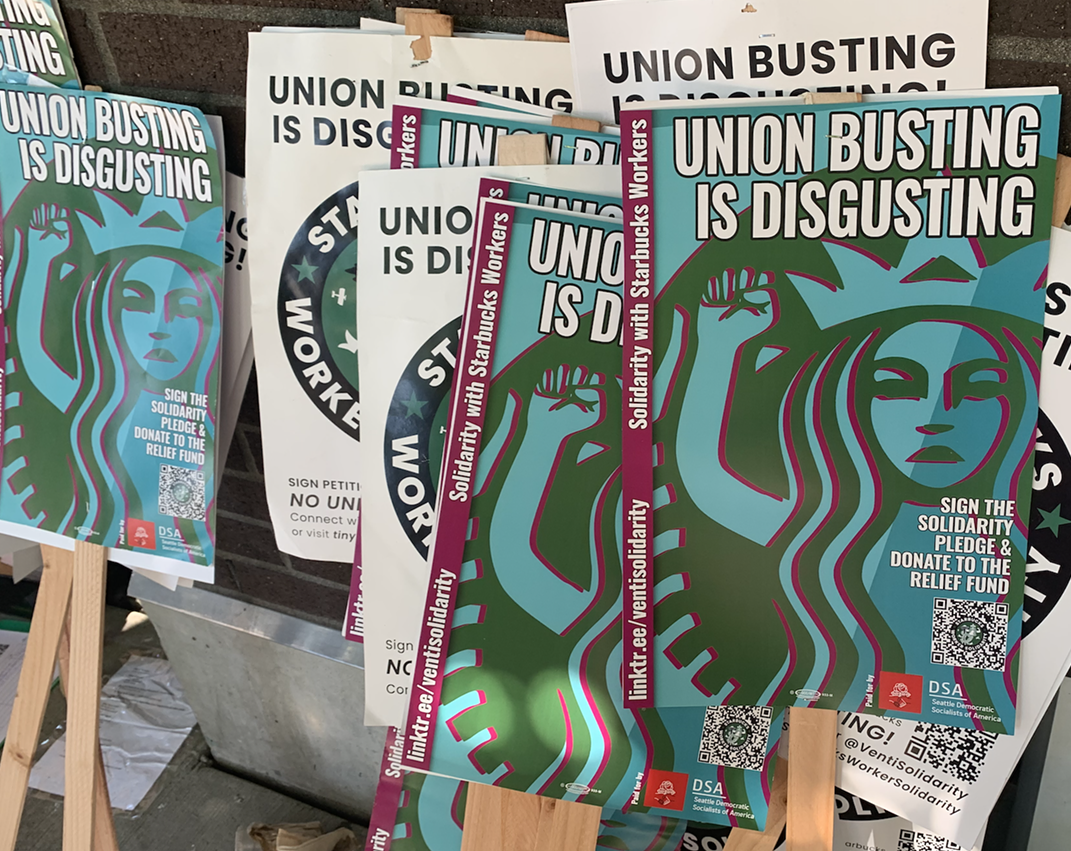 Signs from a recent strike. Hannah Krieg
Back to article

Adapt or die, SBUX. As a former shareowner (600 sh), there's a reason I sold my shares.

Shame on those Starbucks workers who falsely called 911 to harvest faux incident reports just to get a security guard.

Starbucks' CEO makes over 5000X what a typical Starbucks employee makes. They could pay the people who perform the labor 100X more than they currently make and still be just fine. Workers aren't even asking for that. But hey, they're just going to double down, keep union busting, keep raising prices (and blaming employees for that), and will destroy their brand and their business. All of these assholes are so greedy. The only way to stop them is to tax them into oblivion. No one, absolutely no one, should make 5000X the amount their workers make and no one, absolutely no one, should be a billionaire. Enough bullshit. The wealthy are depraved and deranged, addicted to wealth like crackheads are addicted to crack.

@5 - Source please on the CEO comp and the comp while at it on an annualized basis of a Starbucks employee - and don't forget to add tips. I don't believe it.

To the more article's ssue, Starbucks has about 34,000 stores worldwide and about 15,800 in the US. Prudent and normal business practices would look at profitability of each location and not allow ongoing subsidies of money-losers by those that have a profit. Not to mention factors like brand, hassle, safety, security and the like.

Starbucks screwed themselves when they caved to the mobs and allowed non-customers to demand to use the restrooms, which often become unusable and are venues for serious drug use. They should roll that back, lock the restrooms and make them available for actual customers who have spent a few dollars and don't appear strung out.

I don't know if the decision on the Broadway location is a thinly disguised Union busting effort, vs them being sick and tired of a possible inordinately demanding location that to be safe would require significantly higher costs to hire not inexpensive security. Simply put, they don't need to subsidize the location or deal with the hassle and grief just because some organizers are whining. Not to mention that by closing, they send a message that gets articles like this written and news that flows to the Mayor's office. Association is not causation and unless one can credibly demonstrate that stores that are not unionized, facing similar crime levels are supported with company hired security and other measures, vs. the closure of unionized locations, one can't reach the conclusion of union busting.

In the last 48 hours, two black owned groceries in Madrona were robbed by perps in stolen vans who backed into the doors and caused 5 figure damages to each. The largely white Stranger Reading literati are likely not suffering such insults and threats to their, safety, livelihoods and lifework! If I were Target, I would close the downtown store after due notice. Likewise groceries like Safeway who watch merchandise walk out the doors of so many locations. We the people of this town deserve no less, until and unless we show up when crimes occur, arrest, prosecute, try and jail when the charges warrant. Read the below linked article and think about the points made on the actual effects on public safety and black lives by Progressive demands and policies.

@5: Anybody who links to city journal is hereby invited to go fuck himself.

@7 Anyone who dismisses an article based upon the publication absent dealing with the data is a fool who deserves the low potential life they are likely living. I don't dismiss the NY Times, the Wall Street Journal or the Stranger for their editorial bias. It is a requirement for people who lack the bandwidth to discuss issues, to shoot the messenger. How about telling us all what specifically you take issue with in the article. But that would actually take the intellectual capacity. I still hold out hope that there exists people who are capable of reading and discussing. You are not one of them. Oh, swear at me - that will teach me who the man/woman is.

I had never heard of City Journal. Looking them up on the Media Bias chart (https://adfontesmedia.com/interactive-media-bias-chart/) they appear to be a mirror image of the Stranger, with both being Hyperpartisan and both dipping into the "Selective or Incomplete Story/Unfair Persuasion/Propaganda" category.

Also it doesn't appear as though the Stranger has been reviewed since 2020, so neither Will's not Hannah's contributions have been rated. Once some of their gems are included The Stranger will surely fall into the Misleading Information and Inaccurate/fabricated categories.

@8 If you read the comments on your CJ article it has already been debunked. Crime rose in rural areas too. https://www.wsj.com/articles/violent-crime-rural-america-homicides-pandemic-increase-11654864251

999 Holman is not Ballard, it’s Crown Hill.
Sure you can argue that crown hill is Ballard but whatever.

505 Union though literally nowhere near Pioneer Square. Union is 9 blocks away from PS. There also has never been a Starbucks at 5th and Union…