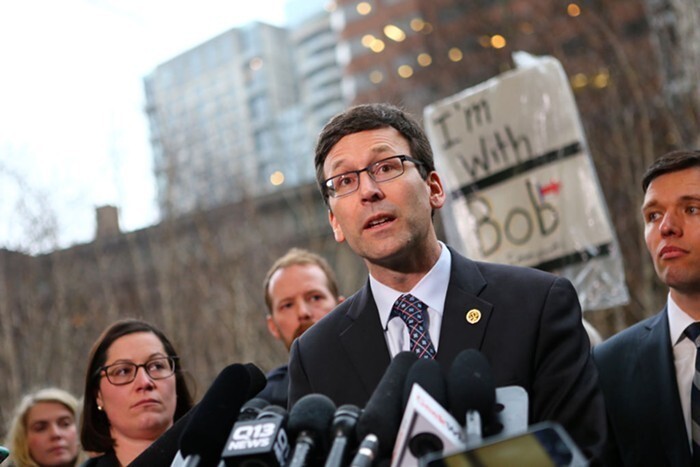 This week, Attorney General Bob Ferguson said he will ask the State Legislature for $1.5 million to create an Organized Retail Theft Unit, echoing claims from some in the retail industry that theft rings represent a $70 billion problem nationally.

But according to other analysts in the retail industry, that $70 billion statistic vastly overestimates the amount of loss retailers suffer from organized retail theft. While retailers have reported an increase in this kind of crime, criminal legal reform advocates say they’re overstating their case as a way to convince law enforcement and the public to support a fresh crackdown on shoplifting more generally.

So, is Ferguson wasting his staff’s time and the public’s dollars on this latest effort? That depends on whether his office continues the approach that local prosecutors have taken, which focuses primarily on people caught in the act of stealing merch for resale, or whether he shifts the focus of enforcement to catching the ringleaders of these organized crime rings.

How Bad Is Organized Retail Theft in Washington, Really?

The fractured nature of the retail industry and its tendency to conflate organized theft with run-of-the-mill shoplifting makes accurately scoping the size of the problem difficult. What we can say with certainty, though, is that it’s not a $70 billion problem.

In an article for the Los Angeles Times last year, reporter Sam Dean debunked that $70 billion figure from the Retail Industry Leaders Association (RILA) by … reading their own report. In their study of retail industry losses, RILA estimated that “$68.9 billion worth of products were stolen from retailers in 2019.”

But that number represents losses from all kinds of theft, including regular shoplifting, theft by employees, and fraud. Dean also revealed that RILA based its study on responses from only a handful of large retailers.

A more accurate estimate of organized retail theft from the National Retail Federation (NRF) pegs the losses at roughly $700,000 per $1 billion in sales, or .07% of total sales. According to the state agency that tracks sales tax revenue, retail sales totaled $210.4 billion in Washington last year. Applying the NRF’s formula to Washington’s sales totals from last year would put estimated losses at $147,280,000.

Still a significant problem, to be sure, but it’s a far cry from the eye-popping $70 billion claim the AG used to justify his proposal for a dedicated unit to address the issue. I asked the AG’s office to justify their reliance on RILA’s statistic, but they did not provide an explanation beyond confirming that they did in fact get the stat from the industry trade association.

How Would the AG’s Office Reduce Organized Retail Theft?

In his press release announcing his proposal, Ferguson explicitly argued that he didn’t aim to crack down on everyday shoplifting. Instead, he will coordinate prosecutions between jurisdictions and assist with investigations to bag the ringleaders of these allegedly organized crime rings.

If that’s how the unit actually operates in practice, then it would be a positive shift from the way local prosecutors are handling these cases–at least in King County.

So far, prosecutors have mostly employed an approach similar to the one they used in the failed War on Drugs. If you think of an organized retail theft ring as a drug cartel, they've basically been scooping up the equivalent of street dealers caught with contraband, but they haven't had much luck reaching the people who actually direct the organization.

I asked the King County Prosecuting Attorney’s Office for any examples of recent cases where they’d busted the leader of one of these organizations, like the father and daughter team who led a multimillion-dollar shoplifting ring in Atlanta last October. The charging documents from the seven cases they highlighted, all from within the last two months, showed that they appear focused on people allegedly stealing large numbers of products intended for resale. That focus is better than trumping up charges against people stealing necessities for survival, but they haven’t taken down any kingpins like in the Atlanta operation.

In an email, a spokesperson from Ferguson’s office said that local law enforcement agencies have told the AG at a recent meeting that they don’t have the staffing to conduct longer-term investigations to catch those kingpins. The spokesperson cited Seattle Police Department Chief Adrian Diaz as one cop who made this argument, though others echoed his frustrations.

It’s not clear that any additional staffing would actually help, though, as retail industry advocates say that targeting the “fences” profiting from resold merch rather than the grunts they deploy to shoplift works best to break up these operations. And there are more direct ways of going after those “fences” than trying to convince foot soldiers to rat out bosses under threat of jail time–like catching them in the act of selling stolen merchandise.

In recent years, most illegal resale activity has moved from brick-and-mortar pawn shops to online marketplaces such as Amazon and eBay, which presents an enforcement challenge for the AG’s office. Because those marketplaces sell to customers across state lines, the AG’s office has limited authority to compel the tech giants to cooperate with investigations into “fences” based in Washington or to crack down on illegal reselling on their platforms.

In an email, a spokesperson from the AG’s office said they’re addressing the issue with the eight largest online marketplaces on a voluntary basis through the task force they convened earlier this year. The spokesperson added that the tech companies have engaged with the state in the process and are working to develop policies that will help identify users selling stolen property on their platforms.

If they can get the tech companies to adopt those policies, or if Congress forces them to do so by passing a law requiring additional disclosure and reporting from online resellers, then Ferguson’s Organized Retail Theft Unit could be a worthwhile effort to reduce organized retail theft. But if the new unit only continues the current pattern of enforcement from local prosecutors, then it will be just as successful as the War on Drugs.