Seattle Has a New Way to Elect City Council Members

District Elections Will Drastically Alter City Politics. Here's What You Need to Know. 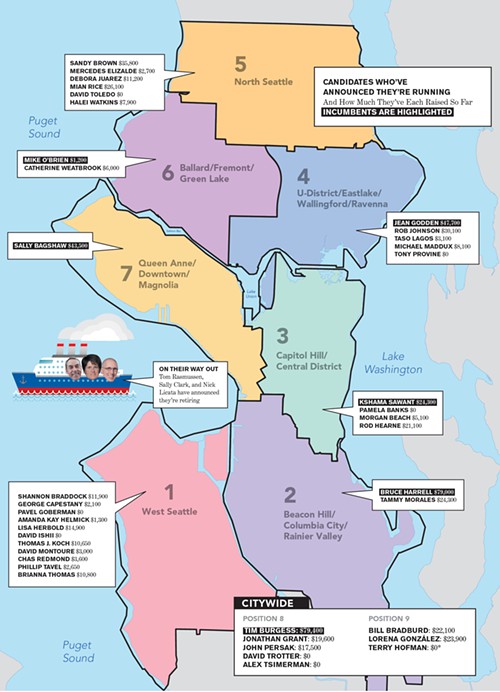 Listen, I get it. It can be really hard to care about local elections. Especially when they're still months away. Especially especially when you don't totally understand what's happening. I'm here to help. See that map? Put it on your fridge, take a photo of it. This stuff is going to be important.

Last time you voted for members of the Seattle City Council, you were presented with just a few candidates, who were running for seats representing the whole damn city. That meant that no matter where you lived, you could vote for whichever among the council's nine seats were up for grabs that year. (And you are registered to vote, right? If not, you need to get on that right now at vote.wa.gov.) That free-love nonsense will never happen again. There are rules now.

Thanks to a city charter amendment voters approved in 2013, we now have a partially districted city council. This means that instead of all nine city council members being elected by people all over the city, just two of them will be elected this way. The other seven will be elected by voters in the area of town where they live. What that means is that you'll get to have a say in picking three of the nine city council members—the one who represents the district where you live and the two who represent the whole city.

Are you still here? Good, because this is actually a huge deal.

Districts won support from people fed up with how expensive it was to get elected in this town and how easy it was for candidates and council members to ignore far-flung parts of the city that aren't full of people ready to write big checks to their campaigns. That old mess, district supporters argued, created a city council beholden to wealthy downtown interests. Now every part of the city will have a tribute in city hall—and they might get there with less cash and more old-fashioned door knocking.

Because this year's election is the first one under the new system, all nine council seats are up for election at once, and it's getting nuts. Three established incumbents—Tom Rasmussen, Sally Clark, and Nick Licata—have already dropped out, creating a free-for-all for their seats. West Seattle has 11 candidates. And we haven't even passed the deadline for candidates to declare that they're running (that's May 15).

It won't always be quite this hectic. In the future, only the seven district-elected members will be up for election at once, and that'll happen only every four years (and when it does, you'll have to pay attention only to the one race in your district). Then in a year in between those district elections—the same year the mayor is elected—you'll vote for the two citywide seats (the first time this will happen is 2017).

This year, though, everyone is on the ballot, and the results could dramatically change the city council.

Some political types say the new system will offer an easier, cheaper path for grassroots, candidates, giving us a more progressive and diverse council. Others say it'll stoke hyperlocal support for neighborhood types, allowing a slate of NIMBY candidates to push the council to the right. And the real cynics say it'll do nothing more than give those same rich power brokers more sway, since they can spend less on each district race and therefore influence more of them. I know! Big stuff!

So pay attention and mark these dates on your calendar: The primary election is August 4. The two top vote-getters in that election will be on your general-election ballot on November 3. Again, if you're not registered to vote, get on it. Or we're not speaking anymore!

Our Endorsements and CHEAT SHEET for the November 5, 2013, Election—Vote for Mike McGinn, Kshama Sawant, and Public Financing!