How Not to Lose Your Virginity 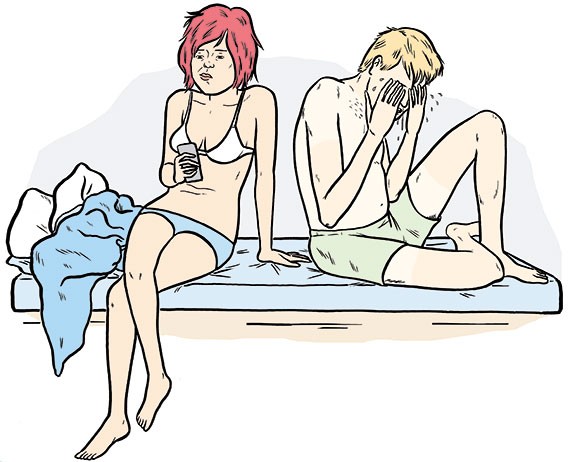 Mike Force
Back to article

1
You do know premarital sex is a mortal sin to Catholics? After 18 years of doctrine, you start to believe it, and you're having a panic attack that you're going to HELL!

Take it easy on the guy, I went to a Catholic school and plenty of people freak out the day after. After a few years you realize what a bunch of BS!

7
If you keep writing like this, people are going to think you're back for good, Cienna.
MacCrocodile on September 18, 2014 at 12:08 PM Report this
8
can't help but wonder... if the situation was genderswapped, would it be considered rape? since, ya know... he didn't actually want it but felt pressured? and she never really did get consent from him.

just my commentary on how we ignore the fact that male rape can and does happen. instead of feeling any kind of remorse for what she may have done to this man, she berates and mocks him for not wanting to have had sex. yeah, the moral of the story is good (talk about sex), but she passes off this experience as "i wouldn't have had to deal with his stupid tears if we'd just talked about it first. god, he should've *told* me about his virginity pledge!!" victim blaming much?
rosainvicta on September 18, 2014 at 12:13 PM Report this

9
@8, Cienna does mention that she and/or her friends were penetrated nonconsensually while sleeping or drunk, so perhaps we could discuss these actual instances of sexual assault rather than inventing one which seems interesting.
Fistique on September 19, 2014 at 8:25 AM Report this
10
I'm a guy, and when I lost my virginity in college, I was blindsided by the emotional fallout (mine, not my girlfriend's). It was a big enough deal for me that it led me to withdraw from the relationship and ruin my friendship with her.

The fact that I had an unexpected and unpleasant emotional reaction to my first sexual encounter doesn't mean that the sex itself was nonconsensual, that I was pressured into having it, or that I was a "victim". It just means I wasn't as ready to go there as I thought I was.

Yes, male rape happens, but there's nothing in the article that would lead a reasonable person to suspect it was a factor in this case, so bringing it up is more derailing the conversation than contributing to it.
vivid on September 19, 2014 at 12:34 PM Report this

11
@10, thanks for your insights. I think society downplays the emotional aspects of sex for men while glorifying it for women, and since we don't encourage men to talk about their feelings, issues like this become compounded.

Like you, I think my partner was unprepared for his emotional reaction (as I was). And I tend to be on the less emotive end of the scale, so it was a weird, tough situation for both of us to get through. But we did, and we remained friends, and I'm really glad for it.

Cienna Madrid on September 19, 2014 at 2:09 PM Report this
12
Great piece, Cienna, actually one of the most useful ones of these "Back to School" things ever written. I hope its Internet reach goes beyond Slog.

And great clarification above, @10 about the derailing.
bookworm on September 19, 2014 at 2:42 PM Report this
13
I was one of those poor homeschooled kids who went from a family farm to Bible college (where I immediately discovered and started devouring 19th century atheist philosophy, but that's another story). I met a girl in college and we got married as virgins as soon as I graduated. Actually, we were still PIV virgins for two weeks after we got married because I was too nervous to get hard and I had no idea what I was doing anyway. My new wife was also equally clueless about what to do.

Where my (now ex) wife and I diverged is that I took all of the blame for this on myself, and she placed all the blame on me. I started looking for for all the books and articles I could find over the course of our seven year marriage about how to gratify a woman. As I was losing my faith over this time, I searched for alt and feminist guides to sex. Meanwhile, my wife was getting more and more withdrawn. We were having sex once a month or less. By the time we got divorced, I was convinced that for all my study and practice, I was terrible at sex, and that I was a hideous person that no one could love. (She made me feel bad for some extra weight I have always carried.) It never really crossed my mind to cheat on her. I can't really count how many tears I shed and all the promises I made to be better at sex, to work harder, to lose weight and not be "ugly" just so I could have a chance at having sex with my wife.

Well it turns out that all that book learning and practice with someone who refused to be pleased has made me - I'm a little shy to admit - kind of amazing at sex. I know my way around a vagina much better than most. I have helped my much more experienced partner discover that she can come from her nipples, ears, and even words I say in her ear. We have sex every day and for great lengths of time, with some really neat kink thrown in too. It is so awesome.

I suppose that the lesson is that there is no substitute for knowledge and practice, even for those poor kids who grew up in religiously backwards homes and got married as virgins. And also the whole virgin marriage movement is filled with misery and no one should ever do it. Have fun and experiment and don't let people put you down. Most especially, don't let people put you down.
on September 23, 2014 at 3:38 PM Report this
14
It will serve as a great teaching tool for my son's and daughters. The point blank prose is super. Thank you for clarity and voice. Brave and cool.
greghost777 on October 6, 2014 at 11:20 AM Report this