Tens of thousands of new Seattleites suffer every year from the Freeze. Here's how you can stop being a statistic and start making friends. 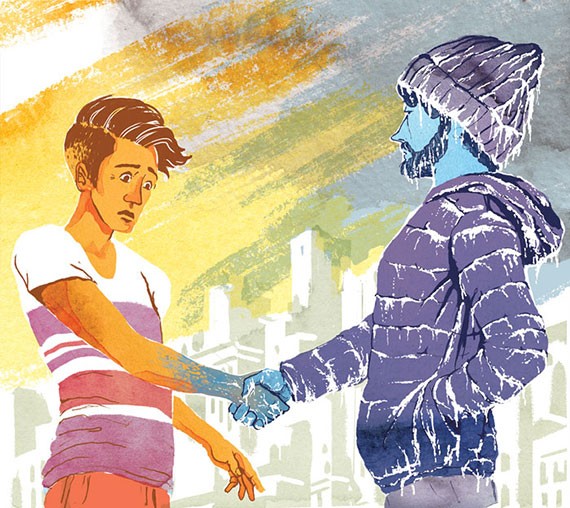 The Seattle Freeze is a real problem for people who are new to town. How do you know the Freeze is real? Because it has its very own Wikipedia page, which describes the Freeze as "a belief that it is difficult to make new friends" in Seattle, and observes that newcomers to the city find Seattleites to be "standoffish, cold, distant, and not trusting." The Freeze is a favorite topic among new Seattleites, who often bemoan the affliction for killing their social lives. Because science has yet to quantify this syndrome, we don't fully understand its impact on the population, but anecdotal evidence suggests that untold tens of thousands of people suffer from the Seattle Freeze every year. And because science doesn't yet understand the Seattle Freeze, a cure has evaded experts, and the suffering has continued unabated.

The following experimental Seattle Freeze cure is a holistic method designed specifically to help you overcome the horrific social chill that so many newcomers have reported enduring. As with any medical treatment yet to undergo field-testing, remember to exercise caution when employing the following methods. Consult a medical professional if you have any questions. Ready?

1. Smile. Or at least don't look like you're mourning the loss of a favorite cockatoo. People are generally more likely to be friendly to you if you don't look miserable all the time.

2. Take the initiative and say hello. All the time you spend waiting for people to talk to you could be better spent, you know, talking to people. True, some people might not want to talk to you. They may even be rude about it. But that's okay! It's impossible to know what other people are going through, and they may have more pressing personal concerns than your comfort. Don't take it personally if someone doesn't want to talk. When it comes to basic superficial social encounters, how someone treats you says more about how they feel about themselves than how they feel about you. If they're rude and angry to you, or smug and self-satisfied, you probably don't want to know them better anyway.

3. If you say you'd like to make plans with someone and they never follow through, check back in with them after an appropriate amount of time has passed. One of the most uncomfortable symptoms of the Seattle Freeze comes when you have a pleasant encounter with a Seattleite, and you mutually make plans to get together at some upcoming social event, only to have your hopes dashed when the Seattleite doesn't follow through with the plans. Rather than mope about how this person let you down by not doing what they said they would do in a hastily sketched conversation days or even weeks before, try to empathize with them. People are busy, and it's impossible to fulfill every potential social commitment. Pretend for a moment it's possible that they might have something more important on their calendar than you. Then, when a day or two has passed, reach out to the person and, rather than accusing them of not caring about your emotions, simply ask if they'd like to do something at a future date. Be specific! People are much less likely to flake on you if you make things easy for them. Don't carry a grudge because you "have to do all the work." If you're fun to be around, people will eventually want to be around you. They just have to get to know you first.

4. If there's a lull in the conversation, fill it. Sure, small talk can be difficult, but leaving a chasm in the conversation is a surefire way to let the Freeze sneak back in. Try filling dead spaces with follow-up questions related to the thing that's just been said, as though you're interested in the person you're talking to. "What do you do for a living?" is a good opening question, and "Do you enjoy it?" is a good example of a follow-up question. If the answer to the first question is that they are currently unemployed, "How long have you lived here?" is a suitable follow-up question. Or "What's your favorite thing about having so much free time?" If you really want to take things to the next level, get imaginative and think of a follow-up question on your own! Once you've done that, think of another one! And then, when the time comes, another one! It's fun once you get started, this "having a conversation with another human being" business.

5. This requires a lot of emotional control, but try not to post long, angry screeds about the Seattle Freeze and how you hate "this fucking passive-aggressive city" on Facebook, Twitter, or any other social network. Along those same lines, stop complaining about Seattle when you first meet Seattleites. If you make gross generalizations about the citizens of an entire city in a drunken rant, those people might not go out of their way to befriend you, because you might seem like an unpleasant person. Which leads directly into the next step:

6. If you meet more than one asshole in a day, you're probably the asshole. Maybe stop and think about how you approach the world. Don't be afraid to put yourself in someone else's shoes.

7. Learn how to be alone. Become comfortable going to events on your own. If you do things you think are interesting—attend readings, go to shows, explore international cinema—you're more likely to meet people who share your interests. And if you learn how to be alone without being miserable, you're likely to be a happier, more likable person. People like likable people.

8. Social anxiety is a disorder, not a personality trait. Disorders are meant to be overcome or managed, not embraced and celebrated as "quirky." Talking about your social anxiety with new people only serves to make them uncomfortable because—guess what—they're probably socially anxious, too. If you're nervous, that suggests there's something to be nervous about. Stop going on and on about how nervous you are. You're making the rest of us nervous! This is not to say you should bottle up your problems and never talk about them, but nobody wants to have emotional baggage heaped on them within two minutes of meeting someone. It's not their responsibility to calm your nerves. It's yours. Lean on long-distance friends and family until you know your new Seattle friends well enough to share deeper truths about yourselves. When that moment comes, when the Seattle Thaw kicks in, you and your new friend will both experience relief, joy, and the pleasure of adult friendship.

Comments 59
Tags: Pullout New to Town New To Town 2015
The Stranger depends on your continuing support to provide articles like this one. In return, we pledge our ongoing commitment to truthful, progressive journalism and serving our community. So if you’re able, please consider a small recurring contribution. Thank you—you are appreciated!
CONTRIBUTE NOW