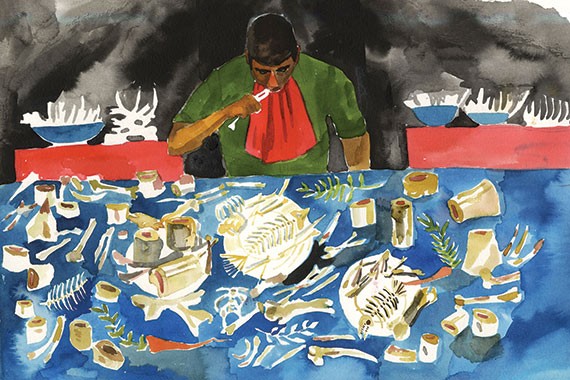 You can't eat bones in peace, or without embarrassment, or without looking crazy in most dining establishments in this country. Kris Chau
Tweet

My grandmother was dirt-poor. She lived in a mud hut on what basically amounted to a rock (nothing grows on a rock) and rarely ate anything as exciting as meat. Whenever there was meat on the table, it was usually a part of the animal that had little value: the intestines, the head, the feet. If there was bone in that meat, you damn well ate it. Eastern Zimbabwe (then called eastern Rhodesia) was a world of primitive accumulation, heavy labor, and next-to-nothing wages.

Very little food was ever wasted.

My father broke the spell of this grueling poverty by basically achieving the impossible: He excelled in school (rare for a black African in the 1950s) and eventually got a teaching position in a mining town called Que Que. At that point, he entered the tiny black middle class. A few years later, he astounded the forces of the universe by receiving a scholarship to a small college in Nashville, Tennessee. I recall the cold night when I was 3 years old and watched him board a jet plane at Salisbury International Airport to fly into a cloudy darkness. We (my mother, my sister, and I) followed him to the New World, also known as the first world, a year later. Us Mudede children (Joseline and Charles) never experienced hunger, found lots of meat on the table every night, were plump like rich Americans. Indeed, when we returned to Zimbabwe, in the 1980s, we looked, lived, and ate like kings. In less than one generation, the problem of being undernourished was transformed into the seemingly absurd problem of trying to lose extra weight.

Despite these impressive and rapid material changes, some habits from the long poor period did not end with my parents. They were permanently imprinted on me.

One is the habit of eating everything on a plate. Another is a taste for insects (particularly termites). And yet another is a love for bones.

The bones that ended up in the dog's bowl were big and white-clean. Anything our teeth could tear or pull away was already gone. Nevertheless, the dog (her name was Sally) made it plain to see that we humans were hardly as thorough as we thought. The bone had many more layers of pleasure that only her kind (the long length of the dog tongue, the special potency of the enzymes in dog saliva, the musculature of the dog mouth) could reach and extract. And after Sally was done, the bone that remained, whatever was left, was well prepared to last forever, to endure into deep history, to join the realm of dinosaurs, to belong to the remotest future.

But I dispatch only big bones to the longue durée; smaller bones are crushed by my teeth and swallowed by my throat. My father, who passed away in 2010, was a big bone man, but I'm more into small and brittle bones.

No matter what kind of bone lover you are, you will rarely receive approval from Americans, many of whom have the amazing ability to call a meal done when there's still plenty of meat on a bone. Why is this the case? Is it because the United States is a super-wealthy country? Meat is cheap here? The low-class pride derived from improving and devouring the less desirable parts of animals vanished generations ago? Possibly. But one thing's for certain: You can't eat bones in peace, or without embarrassment, or without looking crazy in most dining establishments in this country. You have to eat at home or places where third-world habits are still accepted and don't seem bizarre. In Seattle, this often means visiting Ethiopian restaurants or joints in Chinatown.

Here are my favorite kinds of bones, in order of preference. One, the tail of a fried fish; two, the chest bones of a baked or fried chicken; three, the midsize bones of steamed spareribs; and four (for a big bone), stewed or baked lamb.

Fish-tail bones I usually buy at the deli in Foo Lee Market—specifically, the deep-fried and very brittle bones of a red snapper's tail ($4.99 a pound).

For chicken bones, I resort to laziness and visit Ezell's Famous Chicken, which sells a spicy breast that provides just the right crunchiness for a bite by the teeth in the middle of the mouth ($2.50).

As for steamed spareribs, I never miss the opportunity to step into the small and very un-American-looking Duk Li Dim Sum. This place serves in a small and white bowl the kind of bones that appear to be tough but actually have been steamed to that perfect point where, after some effort, they surrender to the pressure of the molars and begin to break down ($2.50). When I eat these spareribs, I feel like an army marching across a field.

As for lamb bones (I much prefer lamb bones to beef bones), I recently discovered the best in the city at the new Agelgil Ethiopian Restaurant. The lamb bone comes with the kitfo and tibs plate ($29.99 for the large—it easily feeds four people) and is not soupy and yet perfect for sucking. The night I worked and worked this bone, I was surrounded by Africans who did not notice me or find my joy unusual. I was at home again.

Why Are People So Weird About Eating Bugs? We'll All Be Eating Them Soon

By 2050, grasshoppers, cockroaches, and ants will be part of Thanksgiving dinner.