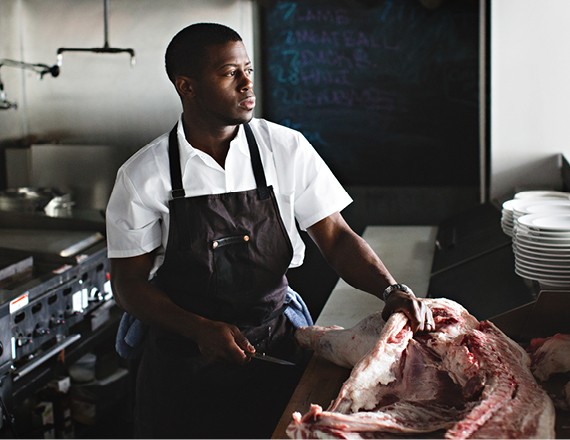 chef and owner of Salare

Where I grew up, I didn't have much. When it came to food, I've always been thinking about no waste, because my family didn't have the opportunity to waste.

With Salare, I'm being respectful of my heritage, going deep into slavery when our folks were cooking in the fields and given end pieces of pork and offal. They figured out how to make those things taste good and feed the family. I still think about that kind of heritage and history now. I also want to open people's eyes.

I don't want to have the same freaking template restaurant I keep seeing around the city. It's kind of embarrassing. There's no diversity in the creativity, and that's what I wanted to have. Everyone in the city gets pigs, but there's no one else in the city making pecan butter and serving it with crackling. This is me speaking.

I need to be open about my path and the road I traveled so that other young black cooks, minorities, and women understand the road is not easy. Especially in this industry, and especially if you go the fine-dining route.

At French Laundry, I was one of two black males. At Per Se, I was also one of two—the same two. There were times that I felt I was one of the better cooks in the kitchen, but I didn't progress. Someone came in after me, and I trained them, but then they'd end up being the sous chef. It's hard if there are no elders or mentors you can go to. If there's no one there to give you a helping hand, you crash and burn.

I had to fight to get Plum Bistro on 12th Avenue. I went up and down looking at spaces for over a year. One guy literally said to me, "I don't think that you can manage multiple locations." And I was like, "What about me says I can't do that?" He had already assessed that I could not do it.

I'm a creative entrepreneur. My background is in graphic design and men's clothing design. I didn't go to culinary school, but I definitely find it interesting and challenging, and it's creative. I have an interesting passion for food, but being a chef wasn't necessarily a part of it.

I was raised vegan. When I went out on dates, there was never a place to go for vegan food that was nice, no place that was fun and cool and that looked like everyone else's places. You always ended up in these hole-in-the-wall places in these random-ass parts of town. I wanted to be in the middle of everything, which is why I wanted a restaurant.

Plum Bistro is a place where you can come to the neighborhood everyone wants to be in and have a satisfying meal. There are small vegan shops, sandwich shops, but not another Plum Bistro–type place in this region. When I first opened, I would go to business consultants and they couldn't even help me; there was no data. They told me I probably wasn't going to make it. A lot of restaurants go under in the first year—but for some reason, people think beef is a better gamble than tofu.

I think of a restaurant as being one of many anchors in a community. It's not just a food place but a gathering place. We have so many regulars who have become friends here, just by sitting at the bar.

I don't particularly find Seattle to be a diverse city. One of the reasons I'm so committed to having this restaurant is that we get a diverse dining crowd, and that's important to me. And I don't just mean racial; it's socioeconomic diversity, too.

Everything here is basically what you would find in my home. No one designed it for me. It's kind of like coming to a dinner party. Every time someone comes here, I feel like a friend brought a friend I didn't know. Most of the time, I walk around and talk to people. It's the conversation that makes it personal.

I recently had a discussion with one of my regulars. It was right after a lot of the riots [in Ferguson] started. He said something that startled me, and I asked a question back. Normally you wouldn't get to do that with a customer; normally you'd have to know your place and just be quiet. But because he's a regular and because we have a social relationship, I was able to ask that question, and we've had an ongoing conversation.

He ended up reading Ta-Nehisi Coates's article "The Case for Reparations," and he told me, "You have opened my eyes. I don't know that I've totally changed my mind, but I'm looking at this differently."

I love that. To me, that's what the gift is. That's what the hard work is for. It's a business, but it's a way to be a part of the community and make a difference.

I really just woke up one day and was like, I don't see myself working on a [restaurant] line for the rest of my life. Especially after teaching kids, I knew. Working with kids is awesome. To watch a child do something that you taught and see how they look at you after—how can you say no to that? How can you say you don't want more of that?

Food, kids, and community. Those are my things. That's what's important to me.

My father was very well respected in the Muslim and African American communities. He was an entrepreneur, your typical African American male. He did a little bit of everything—he sold cars, had a mobile shoeshine business, jewelry, furniture. But the all-beef breakfast sausage and hot links he made and sold? That was something a lot of people were drawn to.

He had a red, black, and green label, which in 1982 was something that no one else was doing. That tells you how very Afrocentric our family was—I am a black man and this is how I'm going to represent myself. Having that upbringing definitely helped me understand who I am and respect the fact that this is what I do. I'm very well in tune with who I am.

To kids, cooks are kind of a new thing. I don't want them to be intimidated by cooking: It's just about taking time to learn how to use sharp objects and understand heat. I want to give them another avenue, another choice. It needs to happen on other levels besides the entertainment and athletic worlds, because those worlds are not accessible to every child. There have to be other levels of mentorship, role models—especially from a male standpoint.

I worked at the Kingfish Cafe when they first opened. My mentor is Tracey MacRae, the original Kingfish chef. We were just on fire—it was the early 1990s, and there were no black superstar chefs, so she was just getting so much attention, and she really pushed me. She said, "I want you to come up with something interesting, merging the flavor profiles that we already use." And I came up with the black-eyed pea hummus.

When I did catering, I would always throw it in as a dip. When I stopped doing a lot of catering, randomly people would come up to me—walking down the street, going to the club, at church, the grocery store and would be like, "You! You make that stuff."

People respond to my food because it's made with love, honestly. If someone were to say, "Hey, let's go out to eat, but I want some food prepared with love," where would you go? When I go to Inay's on Beacon Hill, that's all love. And I remember when Siam was on Broadway back in the day, and there were all those Thai ladies up in the kitchen cooking. People miss that. There's so much corporate-type food now, and people want more than that. You'll sit with your enemy to have truly good food.

That Brown Girl Cooks is a statement. There are a lot of black and brown women who don't get recognition for what they do. Like at Siam. Who was the chef at Siam? You didn't know; all you knew is those women were busting ass.

It was always funny to me, because people would go, "Can I say that? Can I say that... um, brown girl?" Even now it's still a little bit uncomfortable for some. But it's good for people to know up front, because in some circles that I have shown up to work in, they were not expecting me. And I don't want to work inside of a space where I have to deal with that. You need to be clear: this is what I'm about.