The Lesbian Couple Who Broke Up My Marriage

One of them was a coworker at one of the weirdest jobs I've ever had. 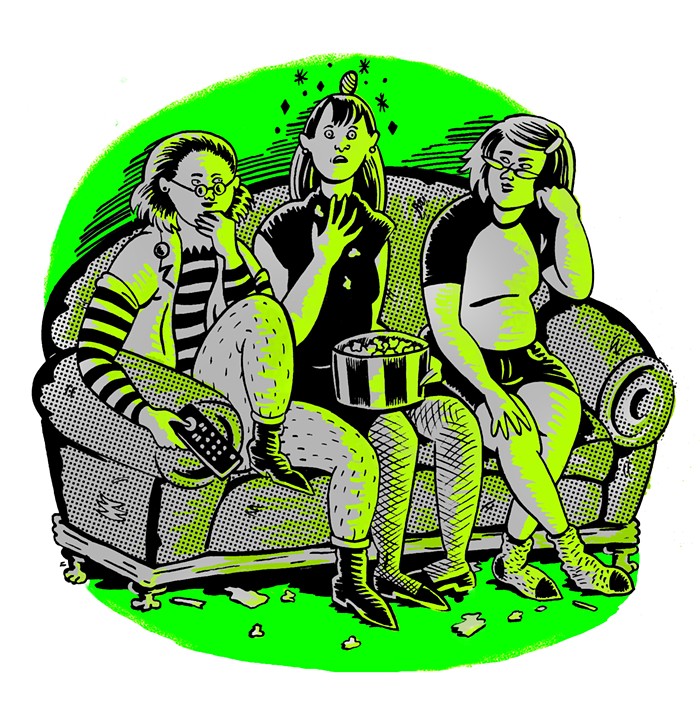 They brought me to their Green Lake home and forced me to watch a terrifying movie. LISA CZECH

I don't remember the coworker's real name, so I'll call her Gail. She taught in the experimental school where I worked. This was 30 years ago.

The guy who ran the school resembled Louis XIV with long, dark ringlets of hair. He wore black leather pants and preached at staff meetings about the liberating effects of S&M. He was also quite brilliant.

It was an odd place to work. Checks didn't always clear. I was the assistant to a neurotic teacher who used to have me rearrange tables, chairs, and rugs all day long. It had something to do with the light pouring through the windows, and her focus and mood. My husband, who was a university professor, was a bit irritated at me for working there. Back then, I chose jobs for their narrative appeal.

I lacked life experience and insight. That's why Gail intervened in my life one day in the teacher's lounge. She thought I was on the verge of a terrible mistake. I had announced to the mostly gay staff that I was falling in love with a woman. It was a friend who came to Seattle for a visit while my husband was away on a business trip. I didn't refer to myself as a lesbian then. The word has always made me uncomfortable, like being in a box, even though I'm grateful for all the people who fought for that word and for the freedoms it brought, and for all the other words that have come and gone and which seem archaic now. I prefer lesbo or lezzie or lesbetarian.

I told Gail that I was going to confess to my husband when he returned home that I had romantic feelings for a woman. I was pretty sure he would be understanding. Gail shook her head and said: "That's a really bad idea. I'm not going to tell you why, I'm going to show you why."

That weekend, she invited me over to the Green Lake home she shared with her girlfriend, Jess. They sat me down on their couch to watch John Sayles's 1983 indie film Lianna. It terrified me. Gail and Jess explained that the film was a cautionary tale to wake me up. It definitely worked. Lianna was married to a college professor. She tended toward naive idealism. She was just like me.

In the movie, Lianna blurts out to her husband that she loves a woman, and things go to hell. Her husband kicks her out. He doesn't let her have contact with her kids. He threatens to undermine the career of her lover. Lianna loses everything, including her homophobic best friend. She moves in with her lover, who is increasingly cold and then announces that she's returning to her ex-girlfriend. Lianna grieves, and cries, and comes apart. Then she gets a job as a checker in a grocery store.

As a result of watching Sayles's film, I changed my disclosure strategy. I nixed the idea of confessing. I started strategizing other escapes. I consulted with a lawyer. I established a separation agreement. I got my husband to sign it while he was still destabilized by the announcement that I wanted a break from the marriage. I told him I didn't know how long the separation might last. I'd already shipped boxes of my stuff to San Francisco.

Due to my airtight planning, I averted all dangers, except for one. I didn't realize that betraying someone I loved, the man I had married, would continue to disrupt my attempts at happiness and haunt my subconscious for years.

I watched Lianna for a second time recently. Lianna's innocence and blind trust still make me cringe, as do the lesbian bar scenes. But the thing that surprised me, the thing that made me uncomfortable this time, was realizing that Lianna had made a better choice than I did by telling the truth and facing the consequences.

Sometimes people try to save us from impending pain but their interventions complicate things. I repeated duplicitous patterns until I finally arrived at a happy long-term relationship. I've learned to listen instead of pushing Lianna-style warning stories on impressionable people.

• This piece appears in the 2018 Queer Issue as “That One Coworker.” See also: “That One Serial Killer” by Dan Savage, “That One Drag Queen” by Jinkx Monsoon, "That One DJ" by Charles Mudede, “That One Writer.” by Sophia Stephens, “That One Teacher” by Katie Herzog, “That One Parent” by Jing Jing Wang, "That One Roommate" by Christopher Frizzelle, “That One Radical Faerie” by Marc Castillo, “That One Songwriter” by Eli Sanders, “That One Filmmaker” by Chase Burns, and “That One Spouse” by Natalie Wood.

Comments 3
Tags: Queer Issue 2018
The Stranger depends on your continuing support to provide articles like this one. In return, we pledge our ongoing commitment to truthful, progressive journalism and serving our community. So if you’re able, please consider a small recurring contribution. Thank you—you are appreciated!
CONTRIBUTE NOW