Baths I Have Taken with Others 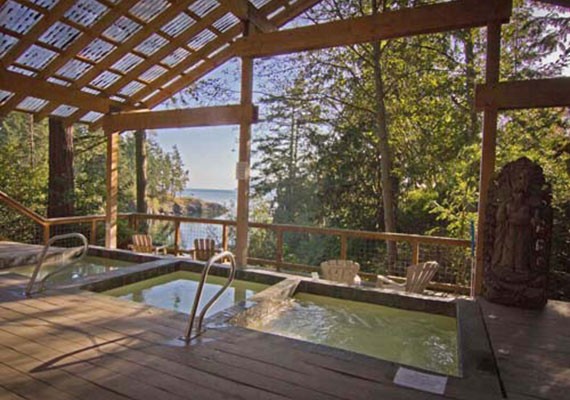 One of the few coed, clothing-optional public baths in the state. Monica Bennett
Tweet

The Undeniable Goodness of Soup

How a Hot Tub Can Change Your Life

Warming Up with Icy Hot

I couldn't tell what the eager, naked Japanese man wanted from me, but I was a visitor in his country—the international rules of etiquette dictated that it was my responsibility to try and figure it out.

There were maybe a dozen of us, all naked and squatting on short plastic stools in front of a wall of spigots. This was my first visit to a Japanese sento, but I knew I was expected to wash thoroughly before moving to the soaking tubs in the next room—where men sat in hot water, white washcloths draped over their heads, emitting a chorus of low, grumbling sighs like a pack of water buffalo who'd just finished a large dinner.

I had been living in a small town in Japan for a few months and was getting used to being a gawk magnet—schoolgirls wanting to take pictures with me, fellow diners not-so-subtly watching me eat in restaurants. Now I felt slightly more naked than everyone else.

The man nodded enthusiastically and twirled his finger in the air. He wanted me to turn around. I complied, a little nervously, and he—to my surprise—began gently scrubbing my back. Then he turned around so I could return the favor. The awkwardness evaporated, replaced by a feeling of almost fraternal tenderness. As we walked to the soaking room, it occurred to me that bathhouses like this one, where most Japanese families washed until the 1960s, are more than just a place to get clean. Stripping down and bathing together can be re-humanizing.

It reminded me of my first adventure in public bathing as a teenager at the Oregon Country Fair, a hippie/vaudeville festival whose outdoor showers and large sauna can accommodate more than 100 bathers at a time. My initial shyness on walking in and putting my clothes in a cubbyhole was quickly replaced by a newfound curiosity about the human form—not just the classically beautiful bodies a 16-year-old would normally spend a lot of energy trying not to stare at, but all the bodies, big and little, saggy and taut, scarred and tattooed, young and old, hairy and sleek, pink and brown and mottled.

In her 12th-century treatise on medicine, the nun, composer, theologian, physician, receiver-of-visions, and all-around polymath Saint Hildegard von Bingen uses a strange word: virgichtiget. It's not in the Oxford English Dictionary (nor Google Translate), but Saint Hildegard repeats it throughout her Physica to describe how parts of the body and mind might feel arthritic, pained, weak, or generally fucked up. "One who is virgichtiget," she writes, "and from it has been made a bit mad, with a divided mind and crazy thoughts, should take a sauna bath." Saint Hildegard knew, as others have known for centuries, that saunas and soaking pools aren't just for warming a body up or scrubbing it down—they're for tying a divided self back together again.

But public bathing takes effort. It's like writing—it's not something I like to do, it's something I like to have done. You have to leave the warm indoors and go somewhere, get undressed in front of strangers, take a shower that will probably involve being cold at various points in the process, ease yourself into a too-hot pool or sauna room, sit for a while to let your body adjust, perhaps endure awkward conversations or awkward silences, and then, if you're serious about it (and you've come all this way, so why not?), plunge your thermally disoriented corpus into a pool or cascade of freezing-cold water. Your body and mind buzz for a few seconds with the shock. Then you do it all over again.

It doesn't sound that great on paper, but after a few cycles of hot-cold-hot-cold, something happens. Eventually, I stop noticing temperature altogether. Hot and cold, comfort and discomfort begin to seem irrelevant, or at least less relevant than they were a few hours ago. An explanatory placard at the out-of-the-way Bella Luna Spa & Sauna in Lynnwood explains it in terms that sound like Saint Hildegard's: "Sudden changes in temperature promotes deep muscle and tissue relaxation. It also improves circulation and calms the psyche."

World history is full of variations on that theme: Roman baths, Turkish-style hammam, the Jewish schvitz (which is said to have evolved from the prohibition against heating water at home on the Sabbath—the schvitz in Cleveland is legendary), Nordic saunas, Japanese sento (public baths) and onsen (public baths fueled by hot springs), Russian banyas, old accounts from Spanish conquistadors of the Aztec temazcalli (from the Nahuatl words for "steam" and "house"), Korean jjimjilbang (with steam rooms whose ceilings and walls are encrusted in supposedly medicinal minerals), Elizabethan "stews" (public baths that doubled as brothels and pubs), hippie hot springs, you name it.

Where can you go around here? There's the well-known Russian-style Banya 5 in South Lake Union ($40 per trip) with a Turkish steam room, a much hotter Russian-style parilka steam room, soaking pools, and rooms for naps and tea. It's coed, and everyone wears a bathing suit—purists might argue that those carry dyes, soaps, oils, and other stuff that isn't ideal for keeping the tubs clean and clear. Either way, it's a pleasant place to spend a few hours.

The Korean-run Bella Luna spa (which is the best deal I've found, at $25 per trip) has gender-segregated soaking pools and sauna rooms for nude bathing, plus seven coed rooms (the spa provides light cotton clothes to wear) with varying levels of heat and "healthful" minerals built into them. One room is lined with jade (the placard at the entrance claims it's good for "calming the soul, maintaining healthy blood circulation, and clearing eyes and ears"), another with imported Korean yellow clay (supposedly good for your skin, gastronomic problems, and "female disorders"), and another with rock salt (good for "insomnia, arthritis, aches, muscle spasms," and so on). Between hot rooms, you can visit a refrigerated "snow room," the closest you can get to a cold plunge while staying dressed. Bella Luna also has a simple, small cafe where a pleasant older lady cooks bulgogi (marinated and grilled beef with vegetables), bibimbap (mixed rice dish with a fried egg), tea, and other Korean treats before you take another round of hot and cold.

The hippie-inflected Doe Bay Resort on Orcas Island has one of the few coed, clothing-optional public baths in the state (camping sites start at $45, rustic cabins at $85) with a sauna room and three soaking pools on a covered platform built into the hillside, overlooking the chilly sea. On a recent weekend visit, its pools were crammed. Walking past the privacy-protecting wooden fence, down the path, and toward the tubs, I felt the familiar old surge of reluctance—the cold, the social politics of nakedness. But I got naked, showered, approached the least-crowded-looking tub, and asked if there was room for one more.

It was a tight fit, but people didn't seem to mind. There was a serene older man with a beard, a quiet woman with short hair and tattoos, a young family of four, a visiting astronomer, and a small herd of bubbly young people who had gathered for a wedding. We talked, alternated between the heat and a deluge of cold water on one corner of the platform, and eventually lapsed into long stretches of quiet. We were strangers together, each treating an individual virgichtiget, and slowly coming back to ourselves.

Little Women, Uncut Gems, Cats (?!), and Other Movies Worth Watching

A Look at the Pros and Cons of Chef-Owned Empires