Claire Denis's Bastards Is a Movie About a Real Bastard

The New Film by the Great French Director 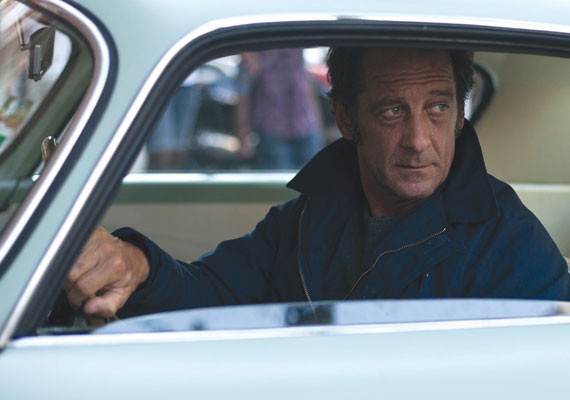 After a man commits suicide on a dark, rainy night, a beautiful young woman wearing only high heels walks down a wet city street. She has a blank expression on her face, her steps are a little unsteady, and her body, which is slender, seems soulless or guided by some evil external force. This is the opening of Claire Denis's latest feature film, Bastards. Set in Paris, it concerns the captain of a supertanker, Marco Silvestri (Vincent Lindon), and his younger sister Sandra (Julie Bataille), who also happens to be the mother of the naked ambulator, Justine (Lola Créton), and the wife of the man who committed suicide. The captain returns to Paris to investigate the mysterious link between the suicide and the public nudity. The captain's dead brother-in-law was, it turns out, in deep debt and in the process of losing a factory that made cheap high heels. As for the niece, her body and her mind were destroyed by shadowy and sadistic figures in some underworld sex society. The clue to solving the mystery is an old and very powerful capitalist, Michel Subor (Edouard Laporte).

Bastards is Denis's first crime thriller, and in certain respects it's close to her only horror film, Trouble Every Day. But as the horror film had no ghosts or demons or zombies, her first crime thriller has no police officers making inquiries or detectives following clues, nor is the ship captain a hero on a mission to reveal the truth and bring criminals to justice. Though he moves into an apartment above the capitalist's mistress, Raphaëlle (Chiara Mastroianni), instead of working hard to piece the parts of the mystery together (tailing the capitalist's black automobile, bugging the mistress's apartment, taking pictures with a powerful zoom lens), he ends up seducing Raphaëlle, and spends much of the film dealing with his growing obsession with her body. The center of this movie is not a revelation that connects the suicide, the shoe factory, and the shoes on the nude woman on the streets, but the moment the captain fucks the capitalist's mistress in her apartment. It is a tense moment. The two are so hungry for real passion that they do not so much kiss as eat each other—open mouths, hands in mouths, teeth on fingers, teeth on lips and cheeks, tongues desperately darting for throats. And, as with Denis's 2002 Friday Night—a film that also stars Vincent Lindon—the camera, handled once again by Denis's right-hand woman, Agnès Godard, explores the sensual planet of human flesh (muscles tensing, skin smoothing, bones protruding). After the needy, breathy, hungry fuck, the captain's life, piece by piece, starts falling apart.

Bastards is not Denis's best film (that honor is still held by Beau Travail), but it adds another part to her universe, which exists between two points: France's former African colonies and the financial and political center of French postcolonial domination, Paris. In Denis's previous film, White Material, we watched a politically unstable black African country descend into war; in Bastards, we watch a recession-hit Paris collapse into madness, prostitution, and urban violence. The film ends with an erectile dysfunctional man holding a dry and hard corncob.

The Death of the $600 Unemployment Benefit Is Not About Economics; It's About Discipline and Power

Slog AM: Washington State Will Have to Shut Down Its Economy in October, the US Job Market Is Re-Collapsing, Swallows Are the Best Birds Ever