The Results of The Stranger's 2007 Sex Survey Are In. Paul Constant Crunches, Bites, Slaps, Spanks, and Teabags the Numbers.

You're a bunch of fuckers.

Seriously. You fuck men, women, women becoming men, men becoming women, one at a time and in groups. You fuck inanimate objects. You fuck in airport bathroom stalls. Some of you even fuck animals. If there's one definitive lesson that can be taken away from the 2007 Stranger Sex Survey, it's that the only "normal" thing that's going on in the bedrooms (and dungeons) of Seattle is, well, everything. You name it, we're doing it. Everything is on the menu. And then some.

Over one week, 3,565 Stranger readers responded to our online sex survey. Respondents ranged in age from 14 to 79, and results came from as far away as Italy, Germany, Australia, England, France, Japan, and China. But most of the results were from Seattle and Tacoma, followed by Portland, Vancouver, and a smattering from Eastern Washington. Using the occasionally glitchy modern wonder known as FileMaker Pro, we managed to hot-oil wrestle the results into a revelatory snapshot of our readers' sex lives.

WHO THE FUCK ARE YOU?

Please note: If the occasional result adds up to more or less than 100 percent, that's because a lot of the results allowed more than one answer, and also because many of you can't figure out how to operate a goddamned computer. (For instance, 0.19 percent of you live in the mysterious land of "Your Google Toolbar can fill this in for you. Select AutoFill," which, incidentally, is not the kinkiest place on earth.) 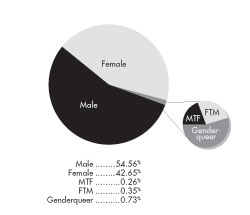 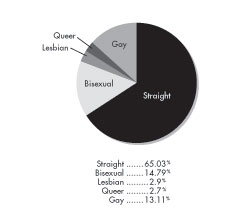 Things get a little broader as the actual sex questions begin: There's no one solid leader on when most people lost their virginity. Answers begin as early as age 1. ("Thank you, fucking pedophile," someone commented, after explaining that their first consensual sex was at age 12, but their virginity had been lost much earlier.) About 2 percent of all respondents had their first sexual experience at 12, and the numbers roughly double for a couple years—4 percent at 13, 7 percent at 14—until we hit about 10 percent at 15. From then on out, it's a free-for-all: 13.25 percent of you got your first freak on at sweet 16, 15.01 percent lost it at 17, and 15.7 percent had to graduate from high school before you could convince someone to have sex with you. From there, 10.57 percent of you lost it at 19, 6.15 percent at 20, 5.24 percent at 21, 2.32 percent at 22, 1.99 percent at 23, and then the numbers get infinitesimal until, finally, the poll's only 40-year-old virgin finally had sex at 41. Hallelujah!

WHO THE FUCK ARE YOU FUCKING?

Now that everyone's fucking, let's see who everyone is fucking.

Where you've met your significant other, though, is a trickier question. The highest percentage of respondents, 13.29 percent, found their orgasm buddies at work. About 10 percent of you either picked up your partner, or got picked up by your partner, at a bar. And if you're one of those guys who thinks that hooting at women on the street will actually score you some poonanny, you should really stop now: Only 2.26 percent of all respondents met their partner while walking down the street, and the vast majority of those respondents are gay men, who really can score just about anywhere. Only seven of you met your partner in an airport restroom, and just four of you—0.00112 percent of respondents—found true love in prison.

We all hate it when a lover cheats, but a partner's past slutting around isn't necessarily a deal breaker: 28.19 percent of you want your long-term partner to have had only 1 to 10 previous partners, 38.12 percent of you would be okay if your dreamboat had messed around with 11 to 50 others, 8.2 percent of you would be okay with 51 to 100 prior playmates, and 4.23 percent would forgive anything up to 1,000 partners. But a whopping 15.81 percent were fine with a partner who had 1,000 or more past lovers—hell, you wouldn't care if your honey had offered himself/herself up as the main course in a Washington statewide bukkake relay.

Relationships seem to have a pretty huge effect on whether you mow the playing field, too. Our pubic hair seems to be in danger of extinction, thanks to our significant others: 43.39 percent of all respondents manscape or she-wax, but 26.43 percent will only trim their junk-hair "by request." Only 25.34 percent of you hairy apes stated an out-and-out "no" on the deforestation issue.

WHAT THE FUCK ARE YOU DOING?

But enough about squishy stuff like "love" and "partners" and "pubic hair." What starts the party in your pants? Again, this poll's results are startlingly different than a sex survey's results from 1987. For starters, oral sex really is officially standard: 95.65 percent of you have received oral sex, and 95.09 percent of you have given it, which means that exactly 0.56 percent of you are HUGE assholes. Buttfucking, too, has come a long way: 65.96 percent of all respondents have fucked butt, and 59.2 percent have had their butts fucked, which is about the same number of respondents who have done light bondage.

About 1 in 10 of all respondents have paid for sex, 6.76 percent of you have been paid for sex at least once, 5.76 percent of you have dated a sex worker romantically, and 1.97 percent of you dated someone without informing them that you were a sex worker. Since Tubs has closed, there's no equivalent to a bathhouse for straight people, which would lead one to believe that straight men would be more willing to pay for sex than gay men. It's actually pretty close: 18.5 percent of all straight men have paid for sex, compared to 15.89 percent of all gay men. If you're a gay man who's over 40 or into twinks, though, you're almost twice as likely to go to a prostitute. The burlier the object of your desire, it turns out, the less likely you are to pay for it: Bear lovers account for only a fifth of all male prostitute-goers. Only 0.004 percent of all women have paid for sex, and absolutely no lesbians have ever once hired a prostitute, which comes as a surprise to nobody at all.

And did somebody say prostitute? Because it turns out you're all a bunch of whores! One of our reader-generated questions touched on your price. Asked how much you would have to be paid to prostitute yourselves, only 17.15 percent of you said, "Fucking me is priceless." The largest number—30.21 percent—said you'd sell your ass for 10 bucks. (You do know, Mr. and Ms. 30.21 percent, that sex workers generally don't get to sell themselves to a buyer of their choosing, right?)

Here's the rest of the Stranger Reader Sex Price Sheet: 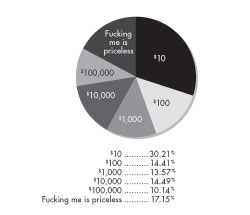 WHERE THE FUCK ARE YOU FUCKING?

We further broke down our survey results to track kink by neighborhood. For example, it should come as a surprise to exactly nobody that Capitol Hill residents are more into butt sex than other Seattle neighborhoods, but, shockingly, Capitol Hill women are strangely antitesticle. We asked straight and bi women how they felt about balls in their mouth during fellatio: 21 women responded that if testicles touched them, even during coitus, they'd scream; 18 of those 21 women live on Capitol Hill, as well as more than half of the 110 women who responded that they "don't even like to think about the fact that testicles exist."

Each neighborhood seems to have its own little community of kink, something that sets it apart from its neighbors. For instance, Green Lake has almost twice the regular number of butt plugs, and it must be some kind of winter wonderland, because snowballing is especially popular in that neighborhood. Residents of Georgetown are twice as likely to have paid for sex. The University District has a lot less buttfucking than other neighborhoods, but the vast majority of respondents who've posted dirty videos on the internet live there. Queen Anne far outranks any other neighborhood when it comes to bestiality.

WHAT THE FUCK DOES IT ALL MEAN?

It's no Kinsey Report—duty, as well as the constant whining of online cranks, requires me to note that although this survey got enough of a response to count as a statistically valid sample of Stranger readers, it's by no means scientific. But this year's sex survey does prove a few things. Stranger readers are really into fucking, in all its gleeful, messy permutations. The majority of the respondents to this survey are in committed, happy relationships, and this hasn't hampered their sexual adventurousness in the least. Everywhere in Seattle—well, everywhere except for Magnolia—people are fucking, and in love, and doing every kinky, weird thing they can to keep their partners happy and to make sure that they're happy.

Basically, at heart, we're just a happy bunch of fuckers.