Another Protégé of Jiro's Joins Shiro in Belltown 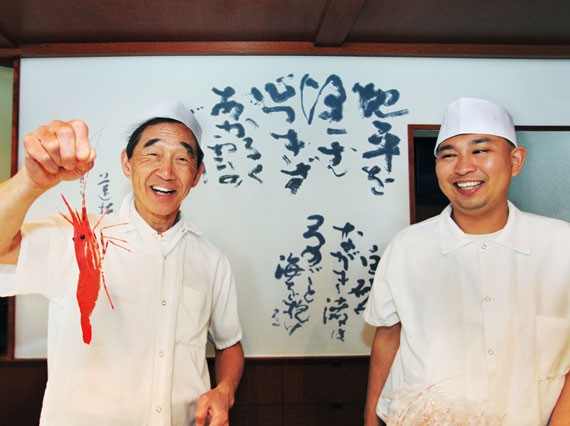 Every chef, gourmand, and random person who's happened to see the documentary Jiro Dreams of Sushi is raving about it. It's the story of 85-year-old sushi master Jiro Ono, who still works at his sushi bar—10 seats, located in the hallway of a Tokyo subway station, recipient of three Michelin stars—every day. The film about him is engrossing, astonishing, and gorgeously, simply shot, and you must see it (or see it again) right away.

Here's the Seattle connection: In the early 1960s in Tokyo, Jiro Ono mentored Shiro Kashiba, who later opened Shiro's in Belltown. In Shiro's recent memoir, Shiro: Wit, Wisdom & Recipes from a Sushi Pioneer, Jiro is mentioned reverently in chapter three. (The book's first printing sold out; the Book Larder in Fremont still has copies, and Shiro will do a sushi demonstration class there on May 7.) What you may not know is that another Jiro's apprentice—the one who made 200 trays of eggs (tamagoyaki, the Japanese omelet) before getting it right in Jiro Dreams of Sushi—is now at Shiro's in Belltown, too.

Jiro's, and now Shiro's, protégé is named Daisuke Nakazawa. (When Jiro finally told him he got the eggs right, he says in the film, he cried like a baby. When Jiro called him a shokunin—a craftsman who strives for ultimate perfection—he wanted to pump his fist in the air. He didn't.) Shiro intends to introduce Daisuke's special eggs at Shiro's as soon as possible. I spoke with Shiro and Daisuke last week.

Shiro, you worked with Jiro Ono, now famous from Jiro Dreams of Sushi—

You worked with him at Yoshino in Tokyo when you were just starting out. What was he like back then?

He was a real, typical Japanese sushi chef. He really taught me basics—[the] foundation, what sushi was. I really didn't know nothing. At that time, he already had long experience.

The film makes it appear that Jiro spends every waking moment working, but there's a photograph in your marvelous book that shows you and him on a hike. [He laughs.] It looks like you're having a lot of fun. So are we to understand that he's actually a human being?

Yes [laughs]. We have a very good partner[ship]. And whenever we have day off, we went hiking around very close from Tokyo area. For refreshment—because our job is always in the room, no chance to be outside.

There are other pictures where you're hiking and drinking beer. [He and Daisuke both laugh.] Would you and Jiro go do that?

No. Jiro-san, he doesn't accept any alcohol for his body.

Jiro still works at his sushi restaurant every day. Are you still here every day?

Nooooo—I work now just three days a week. I have to do so many other things besides the sushi.

Does Jiro make you feel like you're a slacker?

Oh, yeah. About twice a year, I go back to Japan. Every time I see him and have a conversation with him, he always still—the real, real famous sushi chef, he works every day, day and night. So I feel a little, I don't know what—

Oh, no, I'm not lazy! Okay, kind of. But he gives me more idea to live after 70 years old. Right now, three days a week, but I'm thinking about more days.

Yeah, sure. After I saw movie. [Everyone laughs.]

Shiro, you apprenticed at Yoshino for six years for room, board, and a little pocket money. Here in the United States, that would probably be illegal. What did you think of the apprenticeship system there?

That was 50 years ago. Cooking school wasn't popular... I think most of the people in apprenticeship—they train, we can eat, we can sleep, and we get a little money. And [the training's] not from the blackboard—we learn everything from physical. That is the most important part. If we go to school, we have to pay tuition, and not [learn] the real actual business... It's much easier! [Laughs]

Mr. Nakazawa—may I call you Daisuke? What is your favorite thing about Seattle so far?

I work [laughs]. Two weeks ago Tuesday, [I came] from Japan.

In the movie, Jiro is very serious and works all the time. Is this what he's really like?

[Shiro translates.] While he's working, he always is serious. After working, after that, sometimes Daisuke feels that Jiro is like a father. And very kind. Only on the job, he's real serious.

Since the movie came out, what's different at Jiro's?

[Shiro translates.] There are so many guests that don't have a reservation but try to eat there!

Are you making any specialties from Jiro's—maybe the octopus that's massaged for 45 minutes?

[Shiro translates.] He likes to learn current Shiro's style first. Then, eventually, which one is better—we discuss about that. Then which one Americans will enjoy. Because I know—40 years of sushi here. So we are going to have a meeting and then discuss.

Yeah, of course. I have to study—yes, of course—every day.

Think about a sushi roll with yellowtail, cilantro, and cream cheese, tempura-fried, topped with filet mignon, drizzled with jalapeño-garlic sauce.

I like to eat that kind of a sushi, but I don't know if I can call it a sushi roll or not. It's fusion-style sushi. Not the real, traditional Japanese sushi. I like food. Any kind of food! If it's good, I love it. I really love cheeseburgers. My favorite food in the United States: apple pie à la mode... But we sell the real and the traditional Japanese-style sushi. The customer has to understand what do they eat—each item. So it has to be very simple.

I know that you asked some gentlemen with cowboy hats to leave one time because they wanted a fusion roll.

[Shiro laughs.] But, you know, if we don't have any material, we cannot do it! We don't have avocado here. [Daisuke laughs.]

Can you ask Daisuke about this roll—yellowtail, cilantro, cream cheese, et cetera?

[Shiro translates.] He likes to try. But he would never think about serving [it] at Shiro's restaurant.

Or at Jiro's. [Everyone laughs.] You have a beautiful chart in your book of everything in season. What is most wonderful today at Shiro's?

Spotted prawn, from Hood Canal. That is, I think, one of the best in the world. We are serving right now. [And] of course geoduck—unfortunately, very expensive right now. But the geoduck—very nice. Yes.

Do you have fiddlehead ferns at all?

Yes! I pick two days ago, fiddlehead fern. I go out in public park, and I pick it, and I serve it. We call it shun—meaning in season and local.

I was curious what it says on the wall back there.

"More sushi, better health." [Laughs] My wife is Japanese calligrapher. She did it. I really don't understand exactly, but roughly, it's proverbs from Japan, from China. Traditional style. [It's] about "You have big future, so don't give up"—those things. Inspirational words!

(This interview has been condensed.)

Even If You Hate Sushi, You Must See Jiro Dreams of Sushi

A Sushi Master's Memoir (with Tons of Photos)