Residents of the City's Newest, Smallest Residences Talk About What It's Like 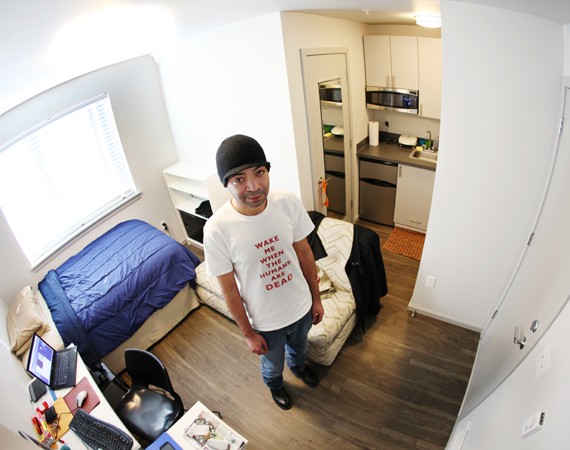 Anthony Felder asks, “How much space do you need for one human?” Kelly O
Tweet

Newcomers arrive, live here, and leave again before anyone else learns their name. They unpack their clothes and computers into these uniform little living spaces—all bright white walls, gray countertops, and stainless-steel details—and then pack them up again a month later. Or six months later. Or maybe a year later.

The apartments are compact, squeezing twin beds next to desks next to half-kitchens and half-bathrooms. The floors are made of concrete or linoleum that resembles real wood. Everything is almost and nothing is.

On a curve of Delridge Way in West Seattle, tucked between traditional single-family homes, are two skinny three-story buildings. They're reminiscent of the nearby houses—if those houses were digitally stretched skyward and tiny roofs were perched on top. Twenty-six-year-old Anthony Felder, a resident of one of these buildings, describes them as "like a cake you don't want to eat."

The low-ply industrial carpet in the hallway is gray. The cabinets are gray and the countertops are grayer. The virginally white walls aren't yet pocked with signs of tenants past. Despite having a one-year lease, Felder is leaving his walls blank. He says he doesn't want to make holes he'll have to fill when he moves out.

Felder works in transcription for a tech company in Bellevue and pays $750 a month for 176 square feet. He spends most of his downtime playing video games like Borderlands and Dragon Age.

While he does wish he had a separate bathroom sink (there's just one sink and it's in the kitchenette), the apartment's size is a nonissue: "How much space do you need for one human?"

In a neighboring tower, 47-year-old Anne Thayer has lived in a nearly identical apartment since she moved to the city in October. Previously, she lived in Oregon and Edmonds, and she came here after a divorce, looking for somewhere to heal.

"The goal was to try Seattle and see how I liked it," she says. "[The micro-apartment] is not a forever thing."

This is a common sentiment among people who live in micro-housing. Even when they've signed a lease, they're already looking forward to leaving. And, despite the potential for shared spaces in buildings like this to create some sort of community among the residents, plenty of people say they never use that common space at all. Here in West Seattle, both Felder and Thayer say they hardly ever use the shared kitchen, which is empty except for a stark stainless-steel table, four white metal chairs, and a canvas print of some faux-antique-looking spoons—like something found on clearance at a T.J. Maxx.

Thayer decorated her $775-a-month micro-apartment in blues and purples and brought in a few pieces of her own furniture to make it feel more like home. She says she feels safe, the building is clean, and she has everything she really needs. Still, she calls it her "room" not her "apartment."

"I always tell people I live in a shoe," she says.

Marina Chavez, who tells me she's "40-ish," came to Seattle from New York looking for a "simpler, easier life." She started googling around for "rooming houses" and found Seattle's micro-housing trend. Sure, she appreciated the smaller environmental footprint and location. But it was the flexibility of three- and six-month leases that sold her, like a lot of people who are feeling their way through the city for the first time.

For $800 a month, she rents her Capitol Hill studio with the customary twin bed, microwave, and mini-fridge. She's enjoyed the convenience of the space, but the potential for community doesn't interest her: "I'm not a friendly person."

A year in, the space is starting to wear on her, and she's planning to move out by the end of the month.

"It feels like living in a closet," she says.

Chris Sadowski does not like the concrete floors or the concrete pillar next to the desk (which is less like a desk and more like a shelf). He doesn't like the lone window or the lack of closet space or the way he has to store his bike in the bathroom, half in the shower and half out. But at some point, his view of the $675 micro-apartment he lives in on First Hill shifted.

"The idea of having so little space is so romantic," he says. "But the execution of it isn't so much."

The 23-year-old moved to Seattle from Maryland last spring to work at a start-up in Redmond. That "went downhill," so he's moved on to freelancing, mostly for another start-up in town that—his words—"rents out college kids" for odd jobs. He works from coffee shops and a coworking space. He sleeps until noon and works until 4 a.m.

"I don't think my life would have existed five years ago," he says.

Now, with seven months still left on his lease, he's growing impatient with feeling too cramped to work from home and not being able to invite groups of friends over. There is no balcony, but he can step out for a cigarette on the roof, where there's a panoramic view of downtown and the bay.

"Some sunrises make it all worth it," he says.

At its worst, micro-housing is sterile, lonely, and closet-like. But at its best, it's providing a whole new point of access for people who are new to town or who want to shift the way they occupy personal space.

Roger Valdez works as a lobbyist for developers that build micro-apartments, but about a year ago, he decided to start practicing his gospel and moved into a $1,350-a-month aPodments-brand apartment. His unit has a postcard view of the Space Needle. With a lofted area he's turned into an office and 220 square feet total, he says he's "living the top of the line micro-unit experience."

Valdez explains micro-housing this way: The apartment acts as the bedroom of a traditional house, where residents spend some of their time, but venture out for everything else.

"People who live in micro-housing see the cafe as their living room, the bar as their kitchen, or a friend's place as their den. They see their micro-unit as their room and the wider community as the rest of their house," he says.

"The idea that 'It's unbelievably small, how could you live that way?' is disconnected from the way a lot of people live in the city. They don't see their apartment as the be-all and end-all of their living space... That facilitates human interaction and human connection. If we all live in giant houses in Sammamish, we don't need to see anyone else."

Gun Safety Measure Could Be Blocked from November Ballot

Stadium Oversight Board: We Really Don't Want to Wade into This Fight About Mariners Money

Marching Orders for Seattle Voters Ahead of the 2018 Midterms

What you need to know, where to get involved, and how to make a difference.