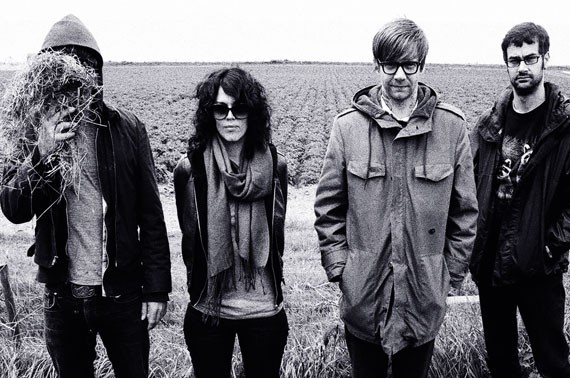 With vocalist Brigid Dawson, guitarist Petey Dammit, and drummer Mike Shoun in tow, Thee Oh Sees are on the road supporting their most accessible album to date, Help, and the demos/singles collection Zork's Tape Bruise. Dwyer fielded some questions with smart-alecky alacrity from his SF home base.

San Francisco seems from this outsider's perspective like a haven for great, strange music of many stripes. Does this observation have any relation to the truth, as you see it?

The Bay Area even surprises me. This year in particular has shown a fucking slayer crop of bands out of the woodwork, reworkings of old vets and new faces alike... uh, bands that rule: Buzzer, Fresh and Onlys, Bare Wires, the Mystery Lights (Santa Cruz), the Sandwitches, Lazarus. I could wax forever.

Does songwriting get harder or easier as you go along? Is there a conscious decision to try to avoid repeating yourself?

It comes in spurts. Sometimes I try and the wind just blows through my hair. Lately, I been writin' like a motherfucker. Got the whole new LP worked out already. What the hell? I thought I was repeating myself.

Do you ever feel like it's impossible to do anything genuinely new within rock's parameters? Or are you unconcerned with innovation and strictly interested in writing what you think are good songs?

I don't feel I have so much the "innovator" talent. It would be nice, but then you hear the Idle Race [Jeff Lynne's pre-ELO band] and never want to pick up a guitar again... So, yeah, I just do what comes naturally, I guess. It's either that or get a job, and I have no skills.

Your musical approach has ranged from barbed noise rock to very gentle bedroom-recording balladry to pseudo-homoerotic electro to lo-fi weirdness. Out of all these styles, is there one that you think represents the true John Dwyer, or do they all somehow equally reflect the essence of your being? (Yes, I would ask Neil Young the same question.)

I am not a complex man. But everything I've done I can say seemed right at the time. I still look back on Zeigenbock Kopf and think it was someone else. Ah, drugs.

Help sounds like Thee Oh Sees' most easily digestible record to date. What prompted this approach?

I'm old and all I listen to now is pop. It's much shittier-sounding live, I promise.

Your productivity is amazing. Do you have a songwriting/recording routine or does your creativity arise in unpredictable spurts? This might be an opportune time for you to describe your creative process (because tips from the masters are always appreciated).

Spurts, ropey knots, arcs. Usually, I smoke weed and play guitar, then I stumble on a song by accident. It's really luck. Ah, drugs.

What qualities are essential in a musician for you to want to play with him/her?

That they put up with my bullshit and can think for themselves. I love the people I play with now. I'm sure I'll regret saying that.

Is that a flute in "Meat Step Lively" [off Help]? I think this is one of Thee Oh Sees' best songs and would like to hear more flute in your—and everybody else's—music. In case you care...

My stepdad and mom bought me that flute, and I play it constantly. I love flute. To all those who don't like flute—fuck you.

Can you discuss the new music you're working on, which you likened in another interview to Pärson Sound [Swedish psych rockers from the late '60s]? This would definitely be an unexpected shift for Thee Oh Sees, as it runs counter to your songs' usual brevity.

I try to emulate them but fail repeatedly. But because of those attempts, I think our next record will have a glazed summer feel to it.

What do you think of the most recent wave of lo-fi artists (Kurt Vile, Jay Reatard [since you're touring together, I assume you like him], Ducktails, Sic Alps, Wavves, Night Control, etc.)? Do you feel a kinship with them—or any other bands?

Jay Reatard kinda blew my mind; his songs are insane. I actually listen to his records often, and I've gotten to know him a little. He is a serious man, as far as making his music his living. Of course I love the Sic Alps; they are like my family. It's kinda rough right now with the whole lo-fi thing, 'cause I think some unnamed people are claiming they coined that shit. How retarded is that? I will fight any of them, any time. Lo-fi don't rule the night. No one does.

What groups/artists excite you these days and why?

What's the most important thing that you've learned in all your years as a musician?

Don't play with people that are anything like you, and don't go looking for gas off the highway unless you actually see a gas station.

What's the worst thing that's happened to you while on the road?

Getting glass in my knee in England, taking ecstasy, and getting a really bad bloodborne infection the next day. Have you ever been inside an English hospital? Good god, it's awful.

What's the best thing that's happened to you while on the road?

You've released on a lot of different record labels (Upset the Rhythm, Narnack, Castle Face, In the Red, Tomlab, Tigerbeat6). Do you find that most of them aren't satisfactory in some way, or is it more a matter of you feeling the need to upgrade every so often?

Both. Unless you do it yourself, all labels (usually) will disappoint you if you are an overbearing asshole.

Does the current dismal state of the music industry have you feeling uneasy or do you view the business-model paradigm shifts and technological changes as a boon to smaller labels and bands?

It's great. Everyone should release their own record and press them through Pirates Press. Plug. But fuck it, they are the cheapest.

What can crowds expect from your live shows on this tour? Do you want them to feel a sense of danger when you take the stage?

Nah, I want them to feel right at home. Are you scared at home?

The Importance of Dr. Abe's New Book on the History of Seattle Hiphop

Refresh Playlist: New Music for the Week—Featuring Cardi B, Youngshirtmayne, Cardioid, and More!