An Interview about Talking Cats, Squandered Riches, and Walking into the Darkness

I was thinking of giving you a massage again, out of tradition.

Oh, wow. That would just be fucking incredible, yeah. I’m sort of embarrassed at how tight I’m going to be—like so tense that it’s going to, like, tell you the answer to all your questions.

Do you remember the last time we did this? We were backstage at Bumbershoot and you had just come back from Ireland.

Oh yeah. Wow. Right. Yeah, I was also a lot richer right then. I had just won a prize! And I was psyched. Yeah. All that money’s gone now.

What did you do with it?

Just lived. I don’t know. Not much. I didn’t invest it or anything, that’s for sure.

Well, I mean—it would be a real choice to make a movie just about a really successful person, you know? And truth be told I’m not sure I would relate to that as much as I do to these characters. That’s not really my inner world. You know? If everything in this movie is sort of heightened fears and stuff, uh, at least for my character, uh—wow, it’s hard to be relaxed and answer questions.

Am I pressing too hard?

No, I’m willing to let it be hard. The interview may suffer but I don’t really care.

Did you set out to make The Future darker than your first movie?

Yeah. I had that in my head as I was editing the first one and was going through a horrible breakup—I was editing this pretty hopeful movie and kind of wanting to die. And laying in bed thinking, “I want to get this feeling into a movie. That would be a real achievement.”

In the very first piece of dialogue, a cat is talking about “the darkness that is not appropriate to talk about.” Could you talk about that?

[Laughs.] It’s not appropriate. It’s like—what if you can’t be tamed? What if you don’t believe that you can love and be loved? You sort of have to believe in your story as a couple, or whatever your fiction is, whatever the story you’re telling of your life, in order to really do it, to actually join with someone. And I often feel like I’m deciding to do that again and again, and there’s all this darkness that lies around that, like in moments it feels like it could be just as easy to walk into all of that. This movie’s the opposite of getting married. It’s like, What if you just kept fucking up, again and again?

Why do you continue to focus on comic domestic material?

Well, I don’t actually think—I think it’s comic to a point. I think there’s something pretty useful about laughing and comedy, especially when you’re in kind of mysterious territory and it’s not that clear-cut, laughing kind of brings you into the fold, even if you don’t know what the fold is. But when I watch this movie I’m keenly aware that there’s a certain point where people stop laughing, and if it’s working there’s another feeling that comes into the room, and that, for me, that’s kind of an achievement, because, I mean, I love the last movie but watching that it was always like, And here’s the next laugh! And that’s so reassuring you could just do that forever. At the same time I guess I don’t want something so overwrought or so pained where everyone’s crying—so I avoid that.

One thing you don’t avoid is showing your whole buttocks in this movie.

How does it feel to be so exposed?

Well, luckily no one’s brought it up. Until now. I didn’t know how that was going to play out and then I was like, Oh, it’s just going to be like it didn’t happen, which is fine by me, it’s enough that it’s there. I don’t know, when you’re writing it, it’s just, like, a good idea: Oh this’ll be good, and then he’ll leave the room and she’s just there, so vulnerable and it’s kind of funny, but then you’re like, Oh right, and it’s me, and I didn’t think that thought until I was rehearsing. And I remember Mike [Mills, her husband] even saying, like, “Just be sure you want to do that. Like, you always put yourself out there and you don’t have to.” If it was another actress I’d be like, “Yes, you’re going to do this.” Plus, it seems like in movies we only get to see one kind of woman be sexual, or sexual in only one way. I’m not super sexual-acting in the movie, and I would be interested in that in another movie, that kind of woman—it’s not like this curvy woman who we already think of in that way. Its like, yeah, actually, everyone has a butt and does this. And I feel like it just opens things up a little bit.

The idea of someone who can freeze time. Did you get that from TV’s 1987 hit sitcom Out of This World?

This girl’s dad is an alien and she can press her fingertips together and everything stops.

Oh wow, that’s good. Good idea that they stole from me. [Laughs.] No, I mean, stopping time—it’s funny at another interview thing someone brought an old 7-inch of mine that’s called Margie Ruskie Stops Time, and I was like, “Oh, right! I forgot I already had this idea. Thankfully, you’re kind of the only person who has this 7-inch, I think!” But I’m a real sucker for anything to do with time or time travel. I could have gotten way nerdier there, but I tried to keep it emotional.

Just more explicitly about, like, well what else happens when time stops? There were some more things that I shot like an orange is falling and it stops midair and, like, everything that was falling at 3:14 is stopped in midair and then they all fall at once and we all hear the sound of all these things falling—I mean, god, I labored over shooting that. It was a nightmare to shoot. It was nice but just somehow wasn’t necessary. But suffice it to say I had a million and one ideas about time freezing.

Why did you pick a leading guy who looks like just you?

I wasn’t all that conscious of that. I was like, “This needs to be very simple visually.” We had to look like we belonged together and me and the other guy needed to look really unlikely, so I kept ruling out interesting people who didn’t look like they would go with me, or they were too masculine in a way that was confusing with regard to the other guy. And Hamish [Linklater] did have longer hair when I cast him, and then—I just saw all these pictures actually, I was like, oh, right—I went with him to get his hair cut and I guess I made it look just like mine.

Do you find yourself having to answer questions about symbols constantly?

That’s just how it goes when you make a movie that’s not totally explicit. The real heart of it is, if it was easy to explain you wouldn’t have to make the movie. Like to some degree you know it’s not easy to articulate. So the answers I end up coming up with aren’t totally true—they just become the words that I say when those questions come up. Not to invalidate this whole interview.

Give me your left arm. What did you do to your left side?

I know! What happened? I feel like this has come up before. Someone mentioned it. It may have been that I fell down the stairs. [A publicist opens the door and sees July being handled by Frizzelle, who’s standing behind her. July turns to the publicist.] No—no—this is not—this is fine.

Especially with my left arm behind me.

Your husband has a film in SIFF, too. Whose is better?

[Laughs.] Well, his is, like, the story of a lifetime. This is his big story. You know? So it better be fucking good. No contest, in a way. And for me, I remember my parents in San Francisco coming to see that movie, and it kind of hit me, Oh, those are my in-laws. Like his movie is as close as I’m ever going to get [to meeting his parents]. And it would be normal for my parents to meet them, and this was as close to that as they’ll be—it’s almost beyond a movie for me.

Can we take the 30 seconds we have left to get a photo of you doing something weird?

Oh yeah. Oh! Well, something I haven’t done in a while is, I always like it when you’re, like, walking, but you’re on the ground. Wait, let me get my purse on. Is this how people walk, or do they… [She situates herself on the floor with her feet against the baseboard, then lifts one foot as if she’s mid-walk.] I could have my cell phone. I could be on my cell phone. The carpet kind of gives it away. 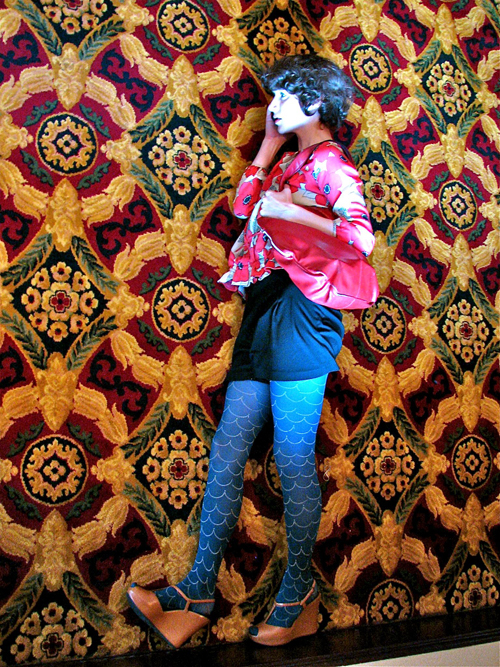