We Will Do Better Next Year 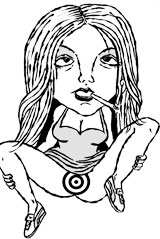 I, Britney Spears's vagina, resolve in the coming year to remain discreetly hidden from public view behind no less than one-eighth of an inch of woven fabric, preferably cotton, silk, or satin. I also resolve to break my owner of her unfortunate habit of referring to me, both in public and private, as "My Bagina," "Little Missy Hoo-Hoo," "The Gravymaker," "The Baby Shoot," "Princess Pooter," "The Happy Hole," or any other tasteless and/or immature moniker she finds herself compelled to describe me with. Further, I resolve to protest more vigorously all unacceptable invaders thrust in or upon me in the coming year, be they organic, plastic, vibrating, wrapped in latex, purchased from the produce aisle, found in the backyard, belonging to actors in That '70s Show, or attached to painfully untalented pseudorappers whose only real talent is an ability to plant seed in low-wattage individuals, including but not limited to one Britney Spears. Finally, I resolve to cease producing offspring for my owner until she is able to demonstrate that she is not a woefully undereducated has-been, notable for prodigious (and no doubt fabricated) mammaries, but otherwise useless (outside of a small and extremely sad segment of society).

Oh, and I want my hair back. 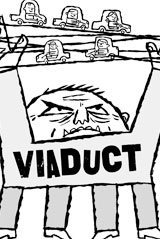 ...to Fall on Some Cars and Kill Some Stupid Motherfuckers from West Seattle If Someone Doesn't Make a Decision
by the Alaskan Way Viaduct

I, the Alaskan Way viaduct, pledge to stand up as long as I can, but I'm really losing interest fast. I'm really fucking pissed that Governor Gregoire didn't do what we pay our governor $145,00 per year to do. Be a leader. Make a goddamn decision. That's what I was holding out for, but her announcement on December 15 that Seattle voters should choose between a tunnel and an elevated rebuild only prolongs this mess. I'm old and tired and decrepit, and I'm really having a hard time not falling down right now. I've got pride, and I was certainly willing to stand here for a few more months, but there's a limit. Without knowing what my future will be, I'm just losing interest in this whole thing. I'll try to stand up as long as I can, but thanks to you, Governor Gregoire, I'm not making any promises. 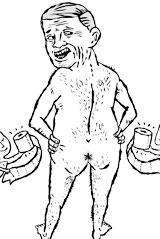 I, Ted Haggard's Anus, resolve to be less demanding.

Like any other anus, I have needs, and in general Ted takes good care of me. Most American evangelicals run around saying, "My body is a temple," but treat their bodies like fucking garbage disposals. So I've always been grateful to Ted for eating right. (I recommend his book The Jerusalem Diet.) Our bowel movements have always been regular, with nice firm stools.

I don't have much use for Mrs. Haggard, but there is one reason every anus wants to have a woman around: better toilet paper. Guys seem to think there's something femmy about purchasing soft, high-quality toilet paper. But who pays the price for cheap toilet paper? Anuses do! Guys saw away at us with clumps of sandpaper, leaving us bruised and bloodied. So thanks, Mrs. Haggard, and I'm sorry.

I'll always feel responsible for the troubles Ted experienced this fall. I'm sorry that my, uh, non-excretory needs became public knowledge shortly before the midterm elections and cost the Republicans control of congress. If not for my burning desire to wrap myself around the poles of gay hookers—if only I could be satisfied with being an exit and not an entry too—we'd still be in Colorado, building up the evangelical movement, not down here in Arizona trying to undo damage.

And Ted would still be eating right. A crisis like this really knocks a man off his diet. Those firm, regular stools? A distant memory. But I guess I deserve to be punished. If anyone has institutional toilet paper coming, it's me. 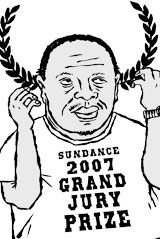 ...to Win Sundance This Year
by Charles Mudede

I, Charles Mudede, resolve to make what happened to me at Sundance 2005 not happen to me at Sundance 2007. For those who do not remember it like I remember: In 2005, Police Beat was in dramatic competition for big prizes, and I was then under the impression that if the film didn't get its director, Robinson Devor, the American Directing Award, or its cowriter, me, the Waldo Salt Screenwriting Award, then it would certainly get its cinematographer, Sean Kirby, the American Excellence in Cinematography Award. The competition that year included The Squid and the Whale, Brick, Hustle & Flow, Thumbsucker, and, of course, Miranda July's Me and You and Everyone We Know, to name just 5 of the 16 flicks in the race. But some film critics, such as the excellent Emanuel Levy, who rated Police Beat as one of four top contenders, placed their biggest bets on our success.

Award night began and ran for two tense hours, and I walked out with nothing to speak or boast of. Police Beat won jack. The cinematography award went to Hustle & Flow (the insult!), and a film described by the great film critic Levy as "mediocre," Forty Shades of Blue, won the top prize. Even pretty Miss Miranda July came out of the competition with something to tell all her friends about: the Special Jury Prize for Originality of Vision. I left Sundance with a hole in my pride.

But that was then and this is now: The people who made Police Beat are going back to Sundance with a movie called Zoo, which is in the race for prizes in the documentary category. In my head and heart, you will find that my resolution is total: What happened in 2005 will not be repeated in 2007. Give me my award. And stop talking about Miranda July. 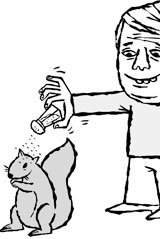 ...to Appreciate Animals More While They're Still Alive
by Brendan Kiley

I, Brendan Kiley, resolve to be gentler toward Seattle's wildlife in 2007. I did some killing in 2006. I'm not proud of it, but I'm not ashamed of it either. I killed a few mammals and a few birds for a story about urban hunting. I shot some, wrung the necks of others, butchered them all in my bathtub, and ate them for dinner. Sometimes it was gross. Sometimes it was unsettling. But I did it to prove a point—that it's more ethically and environmentally sound to hunt your own meat than to buy it—and also just to see if I could.

Weirdly, the experience made me more sensitive to urban wildlife. It could be because stalking and trapping took a lot of effort. I spent time watching animals, thinking about their lives. I didn't used to notice the squirrels and the pigeons quite so much. But now that I've hunted some I feel closer to them, like I understand them a little better, like we have a relationship, like they're my neighbors. I'm not going to stop eating animals. But I'm already caring about them more. 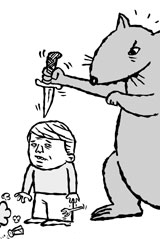 ...to Attack and Kill Brendan Kiley in 2007
by a Squirrel

Oh, now you're caring about us more? Thanks a lot, asshole. I, a squirrel, resolve that all the small, cute urban creatures of Seattle will have their day with you, Mr. Kiley, and I will be first in line, teeth bared, tail bristling. Your deplorable and dangerous article on "urban hunting" was the greatest affront to our kind since the advent of the slingshot. We're familiar with the occasional torments of unattended children who throw rocks at us or chase us with sticks. But you, a full-grown adult, hunting us down and killing us? Then butchering us in your bathtub? Then publicly encouraging others to do the same? This is beyond the purview of hate speech. This is public incitement to murder!

We are done being victims.

You, Brendan Kiley, will die.

Exactly how, we're still debating. The geese and ducks favor smothering. The angrier among the rabbits advocate the Death of a Thousand Bites. The rats want to swarm you some lonely night and eat you alive. (The rest of us think that's disgusting.) I want nothing more than to catch you by surprise when you're walking past a low branch and sink my sharp incisors into your soft, vulnerable throat, leaving you there to be eaten by others. I have no interest in eating you myself. I'm a vegetarian.

The Stranger made mistakes in 2020.