The Best of the Queer Issue

What I know About...

The Delicate Art of Not Giving a Fuck

Having My Cake and Eating It Too

Amend It to End It

In a 'Star Trek' Outfit

The Fag-Hag Emancipation Act of 2006

According to the bound archives, The Stranger’s first Queer Issue was published in June 1996. It included a survey of lesbian-health organizations by Rebecca Brown, a profile of openly gay Seattle politician Ed Murray by Ben Jacklet, and a two-page rant by] Dan Savage about the parade, which began: “Let’s face facts: The Pride Parade sucks. It’s boring. It’s repetitive. It’s uninspired and uninspiring.” That piece first established the Queer Issue’s reputation: antagonistic/provocative/mean. The Stranger’s Queer Issue two years later—the “SHAME!” issue—cemented the reputation. Here is a selection of the best of the Queer Issue from 1997 through 2007. The earliest of these essays haven’t been available on The Stranger’s website until now. 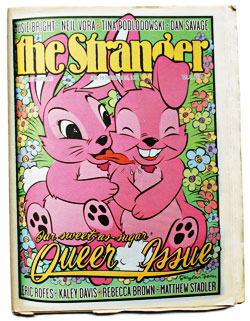 In response to the outrage over the 1996 issue trashing the Pride Parade, the cover of this issue featured cute pink bunnies and the words, “Our sweet-as-sugar Queer Issue.” Matthew Stadler wrote about the benefits of staying closeted (“Let the world’s homophobes deal with the queasy realization that repressed sexuality exists everywhere, ineradicable, unlocatable, beaming inside them at their wedding, asleep in their bed, even somewhere inside them”); Eileen Myles wrote about lesbian life in the 1970s; and Rebecca Brown wrote about her decision to “marry” her partner.

Mother of the Brides: My Lesbian Wedding

I certainly didn’t want or need a government or church’s approval of my life with my lover. But it was an important, powerful relationship Chris and I had with each other, and I wanted a powerful word to describe it. The word I ended up with was “marriage.” Chris and I talked about marriage a lot. [Read more…] 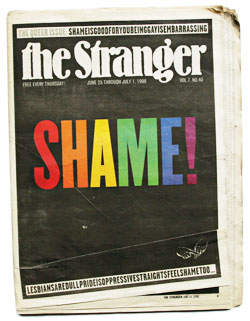 The first Queer Issue with a text-only cover—all black, with huge rainbow letters spelling “SHAME!”—this issue was greeted with outrage and ripped up by a drag queen onstage at the rally after the Pride Parade. In addition to this piece by Matthew Stadler, the issue included the essay that became David Schmader’s one-man show Straight.

An Anecdotal History of Shame

The low point (so far) of my life as a homosexual came at the Gay Pride Parade in New York City, where I was caught among a phalanx of muscular young sun-worshippers chanting “shame, shame, shame” at some bigoted old woman who’d wandered out of her apartment to heckle and bait “the homos.” This ugly irony made the permanent marriage of pride and shame all too obvious. [Read more…] 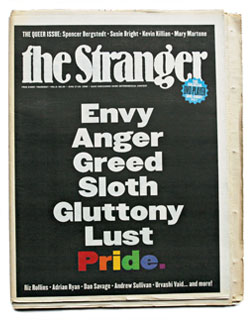 Looking around the gay world, there really isn’t any serious competition for the deadliest sin. Gluttony is the desire to take a simple pleasure and show no restraint in its enjoyment, to take things too far, to obsess about something to the point at which it defeats the purpose it was designed for. It is the sin of excess, of immoderation, of overdoing it… [Read more…] 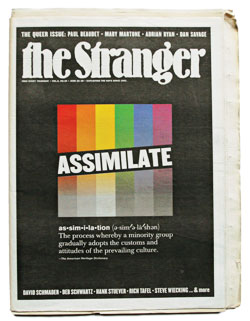 The theme: assimilation. As the introduction explained, “Despite a few setbacks and contradictions, it’s clear that we are living in a time of unprecedented social change. We asked gay and lesbian

writers to take a look at manifestations of gay culture—the gay left, gay hair, gay ghettos—and make some predictions about what will and will not survive assimilation.”

The man who invented the rainbow flag considers himself the Betsy Ross of the gay movement; I like to think of him more as the Holly Hobbie of it. The rainbow flag/bumper sticker/windsock aesthetic—the neighborhood covenants with which all homosexual citizens must comply—is only partly about rainbows. It’s mostly about insecurity, with 30 years worth of accumulated tchotchkes seeming to argue that being gay is a whole lot like being a fifth-grade girl… [Read more…] 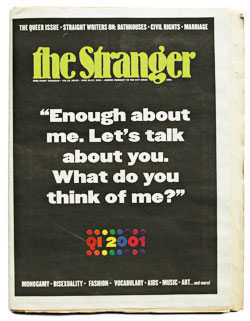 In response to mail from straight readers demanding to know why The Stranger doesn’t do a “Straight Issue,” the Queer Issue in 2001 was written entirely by heterosexuals. Kathleen Wilson expressed revulsion at gay guys who call each other “girl” (“Trust me when I tell you that YOU ARE NOT A GIRL”), art critic Emily Hall wrote a critique of Tom of Finland’s work, Rick Levin went undercover at a bathhouse to see if he could get turned on (he could), and Sarah Vowell wondered why anyone would ever want to get married.

Gay Marriage: Careful What You Wish For

As a patriot, I believe gay marriage should be legalized—the pursuit of happiness and all that—just as I believe that all states should give gays and lesbians a fair shake with regard to adopting children, and that gays and lesbians should be allowed to serve openly in the armed forces of the United States. As a straight, single, childless, peace-loving woman in her 30s, I will also point out that marriage, child-rearing, and military service are not so much dreams to me as outright nightmares. [Read more…] 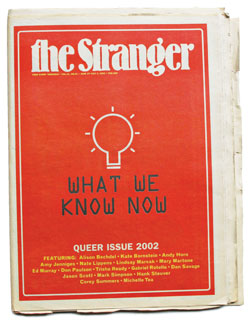 At the age of 28, I thought coming out would be a kind of curative, magical “awakening” that would save me. I was married at the time. One older lesbian friend told me, “Coming out is like winning the lottery” and “We’re more evolved than other people.” I desperately wanted to believe such absurd comments, in order to ease my anxiety. But in retrospect, I wish someone had warned me of a few things [Read more…] 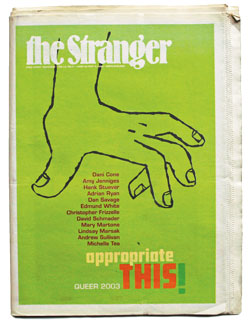 In one essay, Edmund White recalled the days when straights had cornered the market on stupidity and gays were the sophisticates—and insisted that straights take stupidity back:

Once upon a time, straights cornered the market on dumbness. Straights were dowdy dropouts who couldn’t cook five-course meals, whose only cheese was Velveeta, whose clothes came from JCPenney, and whose idea of classical music started and stopped with Mario Lanza and Liberace. They were monoglots, they traveled abroad only on business, they said with a broad grin, as if it were a genuine option, “I don’t read!” [Read more…] 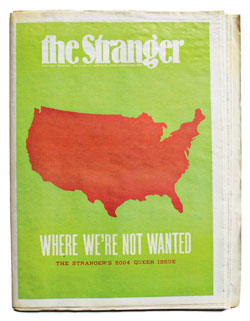 Seven months after The Stranger’s post-2004 presidential election essay “The Urban Archipelago,” this Queer Issue was an examination of red-state America. It included profi les of young gays and lesbians who had fled small towns for Seattle, a memoir by Hank Stuever about growing up in Oklahoma, and a piece of intrepid reporting by Jewish homosexual Eli Sanders that involved visting the most gayunfriendly corners of the country:

A preacher on the car radio is telling me to consider the question: “Just how good do you have to be to get to heaven?” Outside, west Texas rolls by, endless fields of green sagebrush dotted with the bent backs of giant oil pumps. [Read more…] 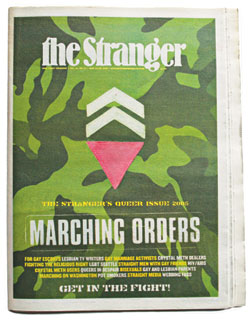 When girls come out, the first instinct, unfortunately, is to chop off all of their hair, throw on a pair of oversized pants, and don combat boots. “It’s a nod to their lesbian elders, or something,” explains one of my cutest lesbian friends, from her perch on a Pine Street barstool. “It’s so they can find their community.” [Read more…] 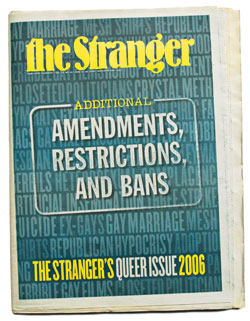 Published just weeks after “George W. Bush’s effort to write antigay bigotry into the U.S. Constitution,” as noted in the introduction, this issue took as its premise that there were other amendments, restrictions, and bans desperately needed in the world—that the Constitution should protect us from family-values hypocrites (Hank Stuever), that a moratorium on bad gay movies was long overdue (Annie Wagner), and that the Gold’s Gym on Broadway needed to be made into a safer environment for straight men to work out in (Thomas Francis).

At first, the attention was flattering. There was the guy who blushed as he asked about my exercise routine. And the one who dropped hints that we could be workout partners, you know, since we both work out in the evening. I rebuffed these subtle advances, but I’m not sure what to do about more aggressive overtures. Like the tall man who, while completely naked, strolled over to] where I, a short man, was changing. He stood a few inches from me, his armpit practically in my face, and slowly applied deodorant while he stared down at me… [Read more…] 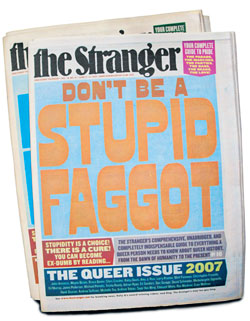 With the most despised cover since the “SHAME!” issue in 1998, this issue presented itself as “The Stranger’s Comprehensive, Unabridged, Completely Indispensable Guide to Everything a Queer Person Needs to Know About Queer History, from the Dawn of Humanity to the Present.” Inside, various writers each took up one year in the history of gay life—with Edmund White on the Stonewall riots in 1969 (“I was there, just by chance, and I remember thinking it would be the first funny revolution”); Dan Savage on 1977 (the year his parents got him tickets to A Chorus Line for his 13th birthday); Senator Ed Murray on 1986 (the year the Supreme Court ruled in Bowers v. Hardwick against homosexuals’ right to have sex with one another); Andrew Tobias on 1994 (and Bill Clinton and “Don’t Ask, Don’t Tell”); and state representative Jamie Pedersen on 2003 (specifically, the Supreme Court’s ruling on Lawrence v. Texas, which overturned Bowers v. Hardwick—a landmark for gays and lesbians).

Sometime in the summer of 1986, the United States Supreme Court ruled in Bowers v. Hardwick that there was no constitutionally protected right to engage in homosexual sodomy. While I read about the decision in the newspaper, I don’t remember actually doing anything about it. The mid-1980s wasn’t a particularly political time in my life. We didn’t have time for politics. We were busy living. And we lived with death. We worried every day about dying of AIDS, or we were dying of AIDS, or we were improvising ways to care for our friends who were dying of AIDS. [Read more…]