The Language of Hiphop Hands

Rappers Rap with Their Mouths and Their Hands 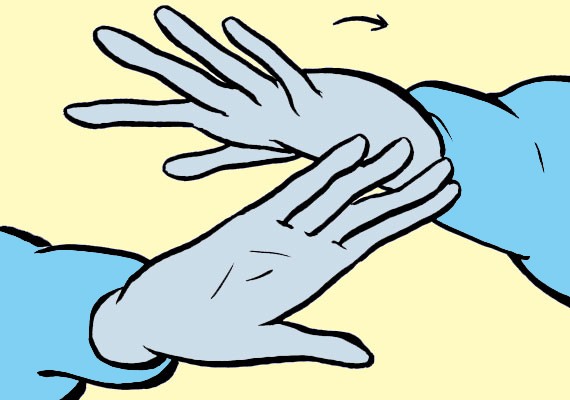 Let's think about hiphop hands. We can begin with this understanding: Hiphop hands are not the same as jazz hands. One can be certain of this distinction because the former does not share the same root or, as a consequence, function with the latter. Jazz hands relate to dancing, to ornamenting the body as it moves in time and through space to a beat. The absolute function of jazz hands—the double dream hands, the shimmy above or in front of the eyes, the clap burst, the rain hands—is decorative. Hiphop hands are rooted in the communicative rather than the decorative—they function to enrich, enhance, and even dramatize the things a rapper is saying. In this respect, hiphop hands are much closer to the deepest and oldest parts of human language.

Now I must introduce Dr. Michael Arbib, a theoretical neuroscientist who, in 1998, published an important paper with Giacomo Rizzolatti called "Language Within Our Grasp." (Rizzolatti is an Italian neurophysiologist who played a leading role in the discovery of the now famous mirror neurons.) In the paper, Arbib and Rizzolatti introduce a fascinating and compelling idea about the source of human language: the hands. This idea came to them when they realized that the part of the brain known as the language area (Broca's area) is also the neural area for grasping. Why would this be? How is spoken language related to grasping with your hands? Arbib and Rizzolatti concluded that the hands were used for human language long before vocal language was developed. The older language, however, is not dead; it's very much with us to this day as gestures. Our hands do not stay still when we speak, but move around and through the air. The old system is tied to the newer one.

Now back to hiphop. As rap is an art of language, hiphop hands are also an art of language. Both are tied to the same communication system in the brain, both are telling us things. We listen and we watch at the same time; we listen to the words of the rap and we watch the hands of the rap—the hands crisscrossing, the hands pumping, the hands pounding. We can even imagine some remote time, some place deep in human history, when something like hiphop hands was all there was to entertain people. No dope rhymes, just dope hands.

It is not the business of this article to produce an exhaustive classification of hiphop hands. It would take years and hundreds of thousands of dollars to identify all of them—general hands, idiosyncratic hands, literal hands. All I can offer the reader are just six hands—six hiphop hands that I find mesmerizing.

When Fabolous uses these hands in the video for the Just Blaze–produced track "Breathe" (one of the greatest beats of the '00s), he raps, "I space myself and just take a deep breath." Meaning, he needs room so that he can think clearly and make sound decisions. But to get this breathing room, you and everybody else need to back up off him.

When Ishmael Butler (Shabazz Palaces, Digable Planets) says "world renowned" in the Zia Mohajerjasbi–directed video for Jake One's "Home," he raises his hands up and wide. This is the hiphop hands expression of the total, the all, the whole of it.

Whether it's done as a single chop or repeated chops (up, down, up, down), we always get the same message from this gesture: If you are going to understand one thing, understand this. In "Still D.R.E.," Snoop Dogg (now Snoop Lion) gives a one-finger chop when he raps, "Still hitting them corners in them low-lows, girl."

Supreme NTM were a big deal in the '90s—filling the airwaves with their beats, selling out shows, moving thousands upon thousands of records. If you are wondering why you've never heard of them, it's because you do not listen to French hiphop. But even if you don't know a thing about this marvelous branch of rapping or a lick of French, Supreme NTM's video for "That's My People" will not leave you in the cold. All you have to do is watch the rapper's hands. They are speaking in a language you understand—it's the language of hiphop hands.

In the video for the Beastie Boys' "So What'cha Want," the late MCA covers his whole face as he raps, "But like a dream, I'm flowing without no stopping." When he releases his face from the hands, he turns his head this way and that, like a man who was in the dark for many years and is now dazed by the bright light of the sun.

Very early in Black Star's wonderful update of "The Message," "Respiration," Mos Def (now Yasiin Bey) waves both his hands, palms down, from side to side as he raps, "This ain't no time where the usual is suitable." Though this hiphop gesture has its origin in standard body language (no way, not doing it, not hearing it), rappers never fail to give it greater expressive depth with more pronounced rhythmic articulation.

Young Thug Is a Living Technological Advancement of Black Art

Young Thug Is the Most Exciting New Voice in Hiphop

So Enough Hand-Wringing About His Dumb Name Already