We Regret Mentioning Suicide, Publishing Essays about Suicide, and Placing Visual Depictions of Suicide on Our Cover

From the Desk of the Enumclaw Horse

From the Desk of Katie Holmes's Fetus

From the Desk of Former Monorail Director Joel Horn

I Regret Those Girls in Roslyn

by the Last Remaining Can of Watermelon Four Loko

I Regret Republicans Giving Me a Bad Name

I Regret That Señor Romney Lost the Election

We Regret These Errors.

We Regret These Erors

From the Desk of Michael Jackson

I Regret Not Taking Out Lance Armstrong

From the Desk of J. Edgar Hoover

by the Republic of Chile

I Regret What's Happening to This City

That Sculpture Is a Stain on Our Reputation

by The Iron-Carbon Alloy Commonly Known as Stainless Steel

I Regret Not Being Considered Food and Offer, for Your Enjoyment, This Recipe

Please Allow Me to Set the Record Straight

I Regret that Pit Bulls Find My Face So Delicious

We Regret We’re So Dumb

by the Voters of Washington State

The cover of the October 25, 2007, issue of The Stranger was a drawing of a man in a business suit committing suicide by jumping off the Aurora Bridge. The Stranger's "49 Best Deaths" issue was a parody of Seattle Metropolitan, but there are many ways to illustrate death and, on reflection, we didn't have to do it with a drawing of suicide. As the website for the American Foundation for Suicide Prevention makes clear, sensational, dramatic, or prominent handling of suicide in a newspaper increases the incidence of suicide. The AFSP cites an example from Vienna where suicides increased dramatically during the mid-1980s when local newspapers were publishing extensive coverage of people committing suicide by jumping in front of subway trains. After a campaign to get newspapers to scale back their coverage of subway suicides, suicide attempts in the subway dropped more than 80 percent and the total number of suicides in Vienna declined.

It was irresponsible of The Stranger to publish that cover image on October 25—reproduced roughly 100,000 times and distributed throughout the greater Seattle area, where unwitting men, women, and children encountered it at coffee shops, bus stops, bookstores, etc., to say nothing of that image living forever in our online archives.

To refresh your memory, here is the cover image we should never have printed: 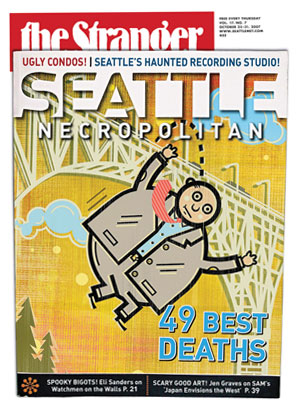 We regret publishing that.

Likewise, we never should have published—on the cover of the drinking issue that appeared January 20, 2005, two months after John Kerry's defeat in the presidential election—an image of a man having hanged himself in a bar on the occasion of George W. Bush's second inauguration: 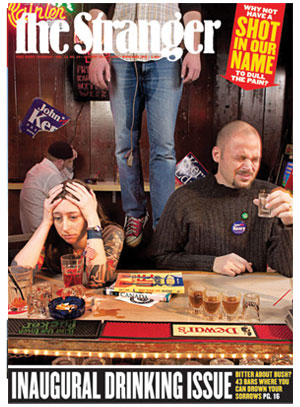 We regret publishing that, too.

And, come to think of it, we shouldn't have published the cover that appears on this week's issue, which "humorously" references our regrettable October 25, 2007, cover, which, of course, depicted a businessman jumping off the Aurora Bridge, only this time, as you can see in the image below (which we regret reproducing a second time), a Stranger newspaper box—full of regret, no doubt—is committing suicide by jumping off said bridge (the scenic Aurora Bridge is the second most popular suicide bridge in the nation, as Megan Seling reported in a recent 5,000-word essay): 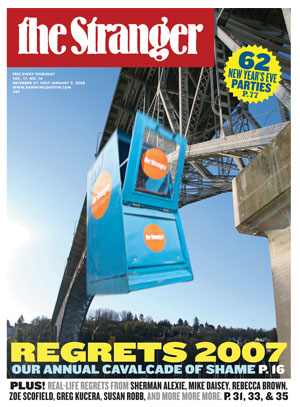 We regret all of these covers, and any suicides caused by their publication, and take full responsibility for Governor Christine Gregoire's decision to spend $1.4 million in 2008 erecting an eight-foot-tall suicide-prevention fence on the historic landmark.

A Message to the City from The Blow